A snapshot of photography, humanity and the camera 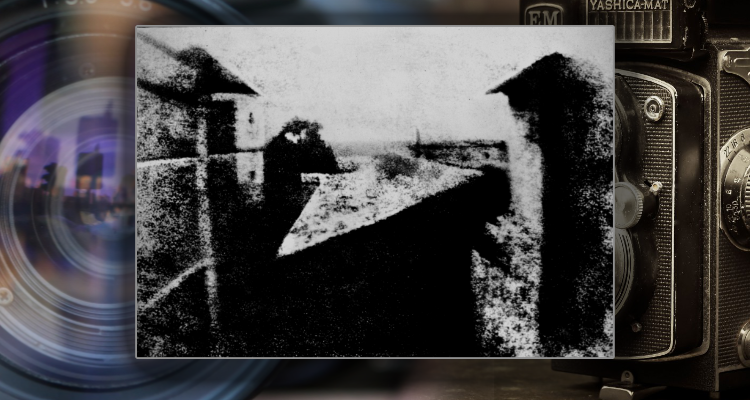 A snapshot of photography, humanity and the camera

Photography has come a long way from camera obscura to the digital camera, in the almost 200 year history since its invention. From the time when cameras were nothing more than a plain box that took blurry photos, to the advent of cameras more akin to mini handheld computers, offering up instant gratification. Photography has played a major role in shaping how we perceive the world around us and often in defining our role in it.

The earliest form of camera

Looking back at the earliest forms of cameras, we find camera obscura or later pinhole cameras. Both of these cameras were based on the natural phenomenon that occurs when a scene is projected through a pinhole onto an opposite surface, upside down. While camera obscura didn’t actually record images, just projected them, artists would later use the concept to trace accurate drawings of real objects. This would later lead to the creation of portable wooden boxes, or rudimentary “cameras” which worked along the same principle.

The early camera and proof that photography exists

The camera and evidence of photography, as we know it today, would come along in the mid-to-late 1800’s. Artists and inventors would use portable camera obscura and pewter, emulsion or wet plates, in tandem with a light source to record the first images that did not fade too quickly. Among the evidence of this early photography, exists a snapshot from 1826 or 1827, created by Joseph Nicéphore Niépce in France. Called ‘View from the Window at Le Gras’, the early heliographic photo depicts a partial courtyard and some buildings. This process of photography was of course very complex and required many steps. This led many to work on improving the processes of Niépce and his successors, to make photography more accessible to the masses.

The dawn of the 20th century saw the modern camera begin to take shape with the creation of film, and cameras, that more closely resembled those of the late century. Up to this point photography was only for professionals and the very rich, but advancements in cheaper and more portable devices meant that ordinary people could finally experiment with photography. Enter paper film, then 35 mm film.  Smaller film allowed George Eastman, the creator of Kodak, to develop a simple and self contained box camera which had a fixed-focus lens and a single shutter speed. Consumers could now take pictures on pre-loaded film and send the camera back to the factory for processing and printing, when the roll was finished. very much like modern disposable cameras way ahead of their time.

By the 1930’s the face of photography and human perspectives would begin to change at the hands of photographers using smaller 35mm cameras. They were now able to capture images of life as it happened, reinforcing actual history, instead of just staging portraits. By World War II many photojournalists had adopted this more graphic, more true to life approach. The instant and immediate nature of modern photography became one of the most important gifts afforded humanity, and it continues to shape us each and every day.

Major events in human history were now being objectively recorded thanks to portable photography. Visually documenting our history, shaping our perspectives, and immortalizing our memories. It makes perfect sense then, that people would want to document their social events and family histories in the same way. Personal photography would become a huge part of the history of the camera. Opening a window into the beautiful, intimate and genuine act of families documenting their stories in the visual medium of the photograph. From birthdays and weddings, to funerals, and everything in between, camera technology has been present in our lives and has shaped the way we approach the sharing of our memories and our feelings for nostalgia.

The wonder of instant images

As 35mm cameras were increasing in popularity and availability, companies like Polaroid and other individuals were working on perfecting an instant type of camera which used self-developing film and a secret chemical process to develop a print. The first of these commercially viable instant cameras was the Model 95 land camera, created by American scientist, Edwin Land, in 1948, but it wasn’t the only of its kind. Other instant camera concepts were being developed as early as 1928. By the mid-1960’s, one company, Polaroid, would become synonymous with instant cameras and capture the public’s attention with various models on the market.

Digital camera technology itself evolved from the same technology that allowed television images to be recorded to video tape. Both NASA and the federal government also made significant contributions to the advancement of digital imaging in the 1960’s. NASA was using space probes sending back digital signals to map the surface of the moon and the government was transporting and improving on digital signals by operating spy satellites.

By the 1980’s and 90’s, multiple manufacturers were working on cameras that stored images electronically. The first of these were point-and-shoot cameras that used digital storage media instead of film. Many of the consumer-level digital cameras available in the mid 90’s actually used magnetic floppy discs, like those that were used with computers, as a storage media. Using floppies allowed around 25 to 50 images to be recorded, depending on the resolution.

After the digital camera revolution found great success and marketing and adoption took hold, the next logical step was to take digital photography and bring it into the mobile phone.

Much like the idea of instantly sharing precious memories and personal moments popularized the instant camera in the mid-century, the desire to share our photos with the world would drive the camera phone to become a hit in the early 2000’s and beyond. even though those first images were at a glorious, yet grainy 640 x 480 resolution! (0.3 megapixels)

Our desire to share our snapshots with the world would have an even greater influence, far beyond mere communication devices like the camera phone or a smartphone.  even today, we are seeing digital photography continue to drive social media.  Much in the way that portable, modern photography and 35mm camera influenced humanity in the 1930’s and 40’s, social media wouldn’t be what it is today if not for photography. Social sharing has transformed personal photography and it has been transformed by it.  From selfies, to food-blogging, and the growth Instagram and Snapchat, which are social photo sharing platforms at their core, the notion of sharing has almost defined a new sub-genre in photography.  Perhaps with more influence than ever before.

Where are we going next?

Where are we going next in relation to photography, the camera, and its effect on humanity? Who knows!  But wherever we go, we can look at the history of cameras and photography and be certain that  human perspectives will be shaped, memories will be immortalized and creativity will blossom, as a direct result of these creations, just as they always have. The difference this time is that we will no longer be hampered by availability, constrained by probability or tethered by film. This time, lack of imagination and innovation will truly be our only limits!