A Surprise Gift of Love for Team Devastated by Camp Fire 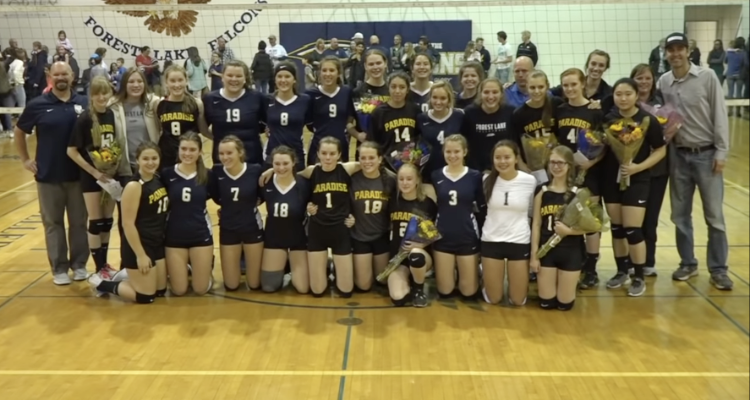 A Surprise Gift of Love for Team Devastated by Camp Fire

AUBURN, CA.  –   Just 24 hours after the Camp Fire in California had nearly consumed the entirety of their hometown and decimated their school, the girls on the Paradise Adventist Academy volleyball team remained determined to play their semifinal championship match. Showing courage, the team made their way to opposing Forest Lake Christian High School to face-off in the San Joaquin Div VI CIF Varsity Womens’ Volleyball Semi-Finals, without uniforms, without equipment and with only the clothes on their back.

The Paradise team arrived to find that the opposing team from Forest Lake Christian was waiting with a big surprise, brand new custom jerseys, shorts, knee pads and socks. But the generosity certainly didn’t end there.

After the game, the teams attended a banquet prepared by the Forest Lake families.

Forest Lake athletic director LaRon Gordon announced that local parents and students had donated donated clothes for players and their families along with more than $16,000 in cash, all of which was raised by the Forest Lake Christian community in under 24 hours. In addition, $300 gift cards were provided for each player on the Paradise team.

The Union, a local newspaper, quoted AD Gordon, “It was truly an amazing scene, and on top of that the volleyball match was amazing too,” Gordon said. “To have two great teams going at it the way that they did. It’s hard to describe how electric it was. I’ve been in sports for 18 years and to be in an atmosphere like that, I can’t really compare it to anything else I’ve been a part of.”

Gordon stated support was overwhelming, and that the gym was packed 45 minutes before the game started.

“To have our community show up in such a huge way, I’m still blown away by it,” Forest Lake Christian Head coach Travis Smith told The Union. “I’ve never seen that many people in our gym, and there were people there who had never watched a volleyball game in their life, but they came to support what we were doing.”

“I’ve never been so overwhelmed by so many things I would have never thought possible, and this is one of the most amazing things I could ever have thought would happen,” Paradise Adventist head coach Jason Eyer said following the announcement. “Your community is awesome. We will be forever grateful.”

The post-game announcement and Coach Eyer’s statement were captured in a video posted to YouTube.

While both teams fought fiercely, Forest Lake won the game over Paradise in four sets, and while the game was important and the winners would move on to the State Finals, something even bigger was at stake here. Tears flowed and new friendships were forged while the two teams posed for photos.

Forest Lake would go on to lose the Division IV regional final three days later, but were provided with a season that meant so much more than just wins and losses on the court.

“No matter what happens (in the championship game), I know that that was what our season was all about,” Coach Smith said. “It was literally one of the highlights of my life. You can take something like a NorCal final four game, which is an accomplishment in of itself, and turn that into an outpouring of love for the other team. Those are the makings of a really good movie.”

“That’s just who my girls are and that’s just what Forest Lake Christian is,” Smith told The Union. “It’s a community coming together to share love.”