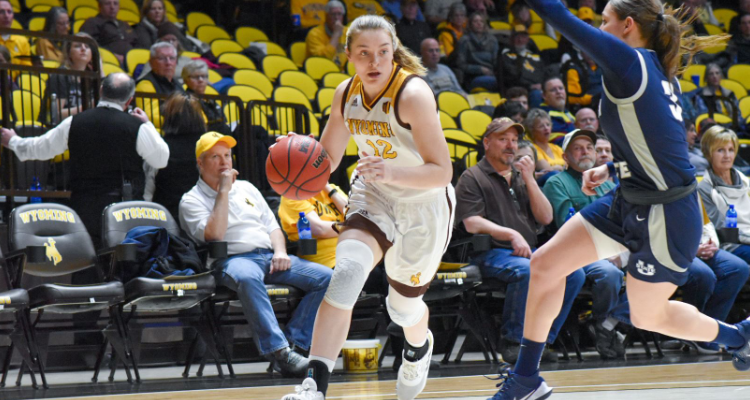 “Everybody played well, once again,” said head coach Gerald Mattinson. “I really like what I see in the score sheet. I like the balance, and I like the effort. But at this time of year, we don’t even have time to review this one. This one’s done.”

Senior Taylor Rusk scored a game-high-tying 15 points on an efficient 5-of-8 shooting. She made three of her four attempts from downtown. Rusk added a game-high-tying eight rebounds and dished out a pair of assists. Defensively, she added a block and a steal. This is the 10th time this season and the 48th time in her career Rusk has reached double-digit scoring in a game.

Freshman Jaeden Vaifanua matched Rusk’s scoring output with 15 points, reaching double-figure scoring for the eighth time this season and the fourth time in the last five games. Vaifanua shot 4-of-6 from the field and made a career-high seven free throws. She pulled down five boards for the Cowgirls, as they outrebounded Utah State, 38-27.

Sophomore Tereza Vitulova scored 12 points on 6-of-10 shooting, reaching double figure scoring for the 23rd time this season and the eighth time in the last nine games. She also pulled down five rebounds while blocking a career-high-tying two shots on the defensive end.

Sophomores Alba Sanchez Ramos and Quinn Weidemann each scored 10 points and each made a pair of three-pointers. Sanchez Ramos grabbed three rebounds and had an assist and a block. The Madrid, Spain native has now scored at least 10 points eight times this year. Weidemann collected two rebounds and added an assist and a block. The Omaha, Neb., product has scored in double figures 11 times this season, including in each of the last two games.

Sophomore Tommi Olson scored two points for the cowgirls, but had a career-high 10 assists to only two turnovers and pulled down a game-high-tying eight rebounds. The 5′ 6″ point guard has led the Cowgirls in rebounding since entering the starting lineup six games ago, averaging 8.3 boards per game. The 10 assists are the most by a Cowgirl since sophomore Karla Erjavec had 10 against San José State last season (3/4/19). Olson added a pair of steals on the defensive end.

“She just has a nose for the ball,” Mattinson said. “Whether it’s coming off the glass, whether it’s loose or she’s trying to dig down defensively, she just has that ability to see, read and go and get it. That’s what also makes her a good rebounder.”

Vitulova opened the game’s scoring with a layup. That score kickstarted a 10-0 run for the Cowgirls and forced a USU timeout with 6:34 to play in the quarter. Out of the break, the Aggies finally got on the board with a free throw of their own to make it 10-1. Weidemann added a three, but the Aggies ended the quarter on a 6-0 run, and the Cowgirls held a 13-7 after one quarter.

Vitulova started the second quarter with a layup, but USU answered with a pair of free throws. After the teams traded points, Vaifanua scored seven straight to make it 24-11 for the Cowgirls at the 3:34 mark of the second quarter. Utah State ended the run with two free throws, but a Rusk three made it 28-13 for UW at the break. The 13 points are a season-low for Utah State in any half of play.

Utah State scored a free throw to start the second half, and Vitulova answered with a pair of layups sandwiched by an Olson steal. After a rusk layup, the Aggies converted another three to make it 36-20.

The squads went back-and-forth until a layup by Vaifanua made it 42-25. Both teams sank free throws, and the Cowgirls called timeout leading 44-27 with 1:45 to play in the quarter. After four straight Aggie points, Vaifanua scored an old-fashioned three-point play to push the lead back to 47-31 after three quarters.

The Aggies struck first in the fourth quarter with a layup, but Weidemann answered with a three from straight away. The Aggies scored four, but Rusk added a pair of triples to make it 56-37 for the Cowgirls.

Utah State was led by Marlene Aniambossou’s 13 points and seven rebounds off the bench. Hailey Bassett scored 10 points and had five rebounds and two blocks.

The Cowgirls return to the hardwood on Saturday, Feb. 22, when they host Air Force at 2 p.m. in the Arena-Auditorium.