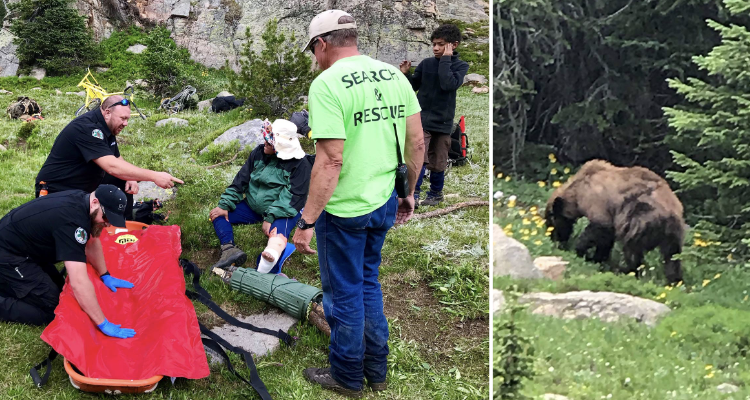 Cody, WY.     –     A grizzly bear complicated, but did not stop the the efforts to rescue an injured Colorado woman from the northwest Wyoming backcountry last Friday. On July 27th, a 49-year old Colorado woman, who suffered an apparent broken ankle while hiking, was safely extracted from the northern end of Beauty Lake in the Beartooth Mountains.

A Search and Rescue team, along with a wilderness medical team from Cody Regional Hospital, were mobilized to the area to assist the woman.

A boar grizzly bear was reported on the trail approximately a quarter mile from the victim. A Park County Sheriff’s Office spokesman said the team successfully avoided the bear while hiking toward the victim by going off-trail around it. Team members were at the ready with bear spray if needed. The bear stayed within 100 yards of the scene the entire time as the injured woman was prepared for transport.

By 7 p.m., the woman was evacuated to the waiting ambulance, then trasported to a nearby hospital.

Sheriff Scott Steward once again praised the excellent cooperation between agencies that resulted in the successful evacuation of the victim. “Park County residents and visitors alike can rest assured that we have the best Search and Rescue personnel in the country right here in Park County,” commented Steward. “And when they combine their talents with the expertise of Cody Regional Wilderness Medical and the Shoshone National Forest Service, our rescue capabilities are unsurpassed.”