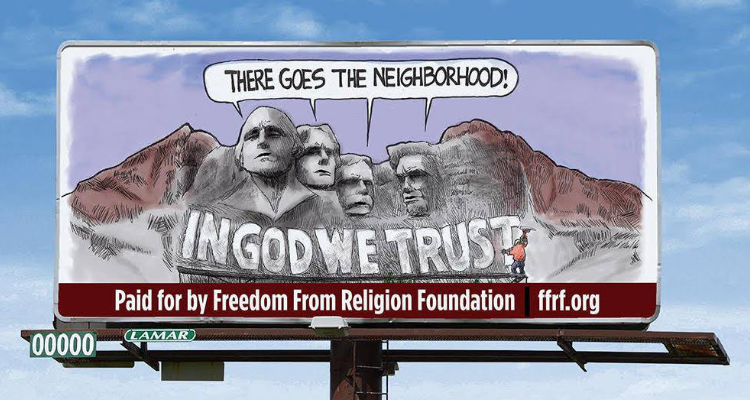 SIOUX FALLS, SD. | RAPID CITY, SD. (AP) — An organization promoting the separation of church and state is putting up billboards in three South Dakota cities to protest the state’s new law that requires all public schools to post the motto “In God We Trust” in a prominent location.

The billboards from the Freedom From Religion Foundation, of Madison, Wisconsin, show “In God We Trust” carved into Mount Rushmore and the four presidents saying “There goes the neighborhood.” The drawing is from Pulitzer Prize-winning editorial cartoonist Steve Benson.

The billboards will be up for a month in Sioux Falls, Rapid City and Pierre.

Foundation president Annie Gaylor says its members are concerned about the law which she says is misguided. Gaylor tells the Argus Leader the motto, adopted during the Cold War, is outdated and divisive.
___
Information from: Argus Leader, http://www.argusleader.com