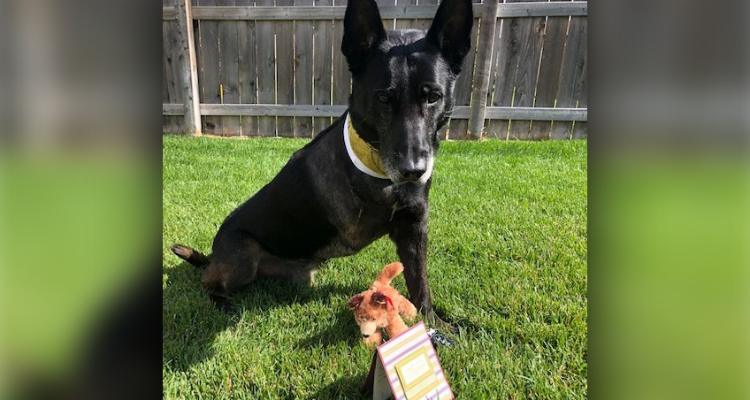 CASPER, Wyo. – The Bureau of Land Management High Plains District’s most recent retiree leaves with him an impressive career and a total number of years in federal service rivaled by few, if you’re counting dog years.

K-9 Haras, known affectionately by staff as “Ras”, retired from police service on the last day of 2019 after 42 dog-years (6 people-years) on the job.

Haras was recently honored in a ceremony that included toys, treats, and the K-9 Service award, presented by High Plains District Manager Kevin Christensen. The K-9 Service Award recognizes police dogs that assist in the apprehension of criminals and the prevention of crime. The award also includes Haras’ induction into the American Police Hall of Fame after he was nominated by Christensen.

“I’m honored to see Haras recognized for his distinguished career and service to the American public,” said Christensen. “We are proud to see him inducted in the hall of fame.”

Haras was born in 2010 in the Netherlands and entered service in November 2013, receiving certification for the U.S. Forest Service soon after. He and his handler later transferred to the BLM in January 2016. Haras retires with an impressive resume of citations and arrests.

Haras is well-traveled dog. When not on patrol at his assigned duty stations, he accompanied his handler on temporary assignments across the country. His resume includes multiple stints at the Imperial Sand Dunes in California, Burning Man in Nevada, fire assignments across the West, and even a hurricane assignment in Puerto Rico. In addition to his typical duties, Haras performed more than 30 demonstrations for schools, civic groups, employees, Relay for Life, nursing homes, at-risk youth, and fire camps.

In the fall of 2019, Haras suffered a leg fracture while training. He was later found to have bone cancer and his leg was subsequently amputated. Despite the setback, he returned to the office only 2 days after surgery and resumed his duties, now as morale officer, patrolling for snacks and attention. Upon retirement, Haras’ handler officially adopted him as a personal pet.

“Haras is a beloved member of the BLM Wyoming community and we look forward to his continued injection of morale in the office,” added Christensen.