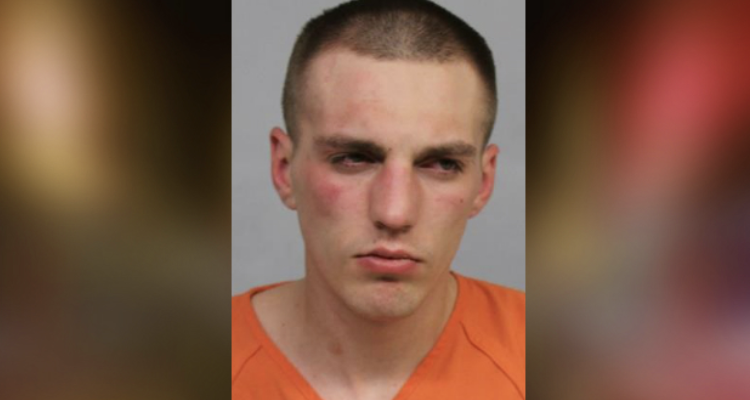 Kyle Martin has had his initial appearance in court. He has been formally charged with 6 felony counts, including aggravated kidnapping, aggravated burglary, and aggravated robbery. His bond is being set at $500,000.

Adam Ray McClure, 22, has been located by authorities, McClure is being interviewed by detectives. According to Detective John Hatcher of the Casper Police Department

“We do not know what pending charges Adam McClure is looking at,” Hatcher said in an email. He said more information will be released as the investigation continues.

CASPER Wyo.- The Casper Police Department has released further details regarding the arrest of Kyle McCabe Martin, and the subsequent discovery of a 95-year-old woman, who claims to have been hit over the head with a gun and kidnapped by two men.

The woman was transported to Wyoming Medical Center after she was discovered in the vehicle. Her condition was described as “stable.”

Officials say that they have been investigating a string of auto-thefts and burglaries in the Casper area. That investigation led police to the Eastridge Mall at approximately 1:30 pm, On March 20th. Police say that they observed a vehicle in the Eastridge parking lot, driven by a man that was identified as a suspect in the case. Police have confirmed that the driver was Kyle Martin.

In an arrest affidavit, police say that as officers and detectives approached the vehicle, Martin is alleged to have sped away, leading police on a pursuit through Casper and into Evansville. The vehicle was said to have then become stuck, at which point Martin is accused of attempting to flee the area on foot.

Martin was ultimately taken into custody and questioned. Police say that Martin told them he had been driving a stolen Silverado pickup earlier in the day and had parked it at a local apartment complex. Martin said he traded vehicle with a friend, whom Martin knew had stolen vehicles.

Police go on to say that Martin admitted to using keys he obtained from an individual to attempt to enter a residence on the 1400 block of Jim Bridger Avenue, in order to steal computers. Martin said that he received the keys from the same individual who had provided him keys to the Silverado.

The Silverado was not the vehicle that Martin was found to be driving at the time of his arrest.

Police received a tip at about 5:30 pm, March 20th, urging police to search the trunk of the vehicle that Martin had been arrested while driving. Investigators did so and located a 95-year-old female, who was bound with duct tape, and was reported to have lacerations on her head and face.  The woman claimed that she was kidnapped by two males who hit her in the head with a pistol.

During a subsequent interview with police, investigators say that Martin admitted that he had been obtaining keys to vehicles which he knew to be stolen. Martin explained that he would be told by the person who stole the keys, where Martin could find the matching vehicles.

Police say that Martin claimed to have obtained the Silverado from where it was parked in front of the owners house just days previously.  On March 20th, Martin alleged that he drove the vehicle to various addresses around Casper, including an address on Jim Bridger, where he had attempted to gain entry.

Martin then is said to have told police that he drove the Silverado to the neighborhood near Nancy English park, and met up with another male. Martin then described walking the neighborhood, and attempting to evade law enforcement.

The affidavit says that Martin described he and the other man unlocking the back door of a home and entering the residence by unlocking back door. Martin is said to have seen a woman on the couch sleeping. The men found a set of car keys in the home, and entered the garage to begin removing items which were stacked on the vehicle inside.

The other male was dropped off at an area apartment complex, while Martin was said to have taken the vehicle, with the woman in the trunk, to the Eastridge Mall. When officers attempted to contact Martin in the parking lot, police say that he admitted to attempting to escape with the victim in the trunk.

Police are still seeking another suspect in the case, Adam Ray McClure.

McClure is described as a 22-year-old white male. He has a tattoo reading “Only God Can Judge My Life” across his upper chest, and “Family” and “Forever” on each forearm.

Anyone with information about the whereabouts of Adam Ray McClure are asked not to approach the suspect, and to contact law enforcement immediately, at 307-235-8278.