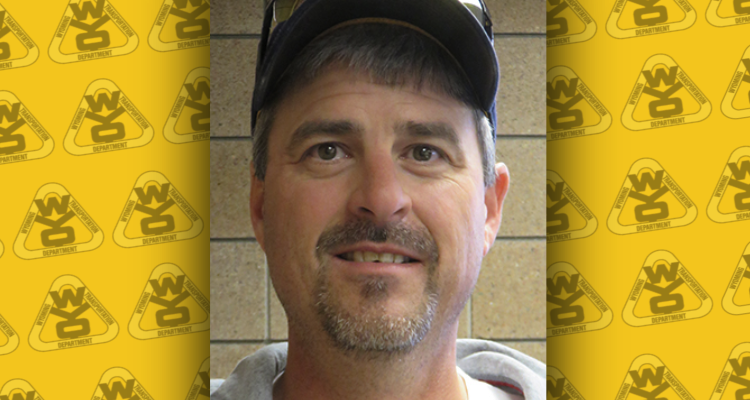 For his dedication to helping others, Eckhardt received the G. Clyde Larson Memorial Award in November in Cheyenne, which recognizes acts of heroism by Wyoming Department of Transportation employees either on or off the job.

Since its inception almost 49 years ago, 53 WYDOT employees have been named Larson award recipients. The Wyoming Highway Commission established the award in 1969 in honor of the late G. Clyde Larson, who was appointed to a six-year commission term in 1965. Larson died in July 1968. His son, Grant, who served as a Wyoming senator from 1995-2010, was appointed to fill the unexpired term.

“We don’t give this award very often, which shows this is truly a special honor,” said WYDOT Director Bill Panos. “Stuart, without hesitation, rushed into a dangerous area to help another human being. For all that you do, for everything you did that day, thank you. You are a hero.”

The incident happened on Sept. 14, 2017, when a crew from Cowley’s Wilson Brothers Construction was working on a rockfall mitigation project near along U.S. 14/16/20, west of the tunnels near Buffalo Bill Reservoir.

Triptych Construction, of Glide, Ore., a subcontractor of Wilson Brothers, was preparing to pull a portable drill up the slope to drill anchors for rockfall mesh. Several of its workers were roped in on the slope. Powell was on the ground preparing the drill in the ditch between the road and the slope.

While this was happening, WYDOT resident engineer Todd Frost, Eckhardt, fellow crew member Leslie Hackworth and project geologist David Vanderveen were meeting with George Hickey, of Triptych, and Ben Arndt, an employee of design consultant Yeh and Associates, about 300 feet away in a parking lot.

“They were reviewing the mesh limits and anchors when they heard someone yell ‘rock,’” Panos told Wyoming Department of Transportation commission members. “As they looked up, they saw a rock tumbling down the slope. Shane Powell started running, and the rock struck him in the head.”

Powell was wearing a hard hat.

Hickey ran to Powell, while Eckhardt yelled to Frost to call 911. There was no cell service in the area, so Frist used his WYDOT radio to call for help.

“Stuart grabbed his first-aid bag and ran into the area of the rockfall to help Shane,” Panos said. “Stuart rendered first aid until an ambulance arrived on scene.”

Powell was taken to West Park Hospital in Cody, and was later moved to St. Vincent Hospital in Billings, Mont., where he died of his injuries 14 days later. Powell’s wife, Tricia, was at his side.

“Although the accident ended tragically, the actions of everyone there are to be commended,” Panos said. “Stuart, without hesitation, rushed into an area of grave danger with potentially more loose rock hanging above him, to render first aid in an attempt to save a life. He stayed in that location, giving aid until other trained professionals arrived and they relieved him.”

Eckhardt is a 28-year veteran of WYDOT. He was originally hired on May 1, 1989, as an engineering assistant. Eckhardt served in the U.S. Marine Corps, earning the rank of Lance Corporal as an infantry mortar-man at Camp Pendleton, Calif. He was honorable discharged Dec. 22, 1988. Eckhardt is a Cody native and Cody High School graduate.