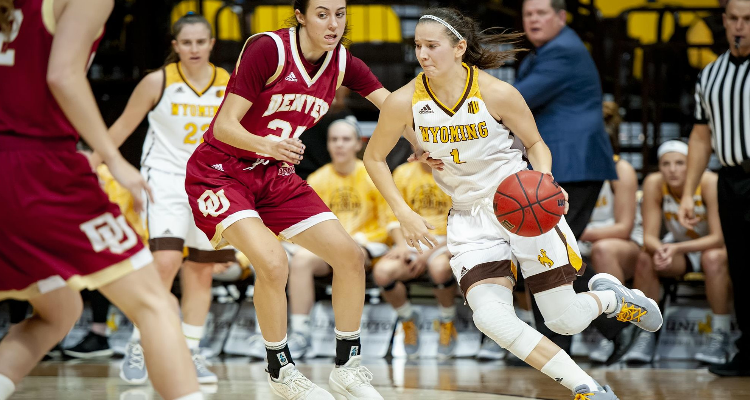 LARAMIE, WY.  – Behind senior Bailee Cotton’s double-double, the first for a Cowgirl this season, and freshman Karla Erjavec’s career-high 18 points, the Cowgirls held off one of the most potent offenses in the nation and earned a 78-74 win against Denver.

“This group makes nothing easy, but they don’t give in,” said head coach Joe Legerski. “When you have a lead, sometimes it’s harder to try to keep that, specifically against a team that’s 6-1, playing very well and has the ability to shoot the three point shot. They put so much pressure on you. We were able to do a pretty good job defensively in limiting the amount of threes that Denver took tonight. It’s what we wanted to do, and they still shoot 50 percent.”

The Pioneers entered the contest averaging 90.0 points per game and 11.3 made field goals per game, but only managed to score 74 points and make seven three pointers, as the Cowgirl perimeter defense shined in front of 2,374 fans in the Arena-Auditorium.

The Cowgirls were led by Erjavec’s 18 points, including an important personal 6-0 run immediately after Denver took a one-point lead in the fourth quarter.

“I thought Karla was big for us,” Legerski said. “We go down a point with about four minutes to go, and she takes someone off the dribble and hits the shot, gets fouled, steps to the free throw, makes that free throw and then hits a big three out of the corner.”

Cotton had 16 points and a career-high 14 rebounds, eight of which were offensive, for her first double-double this season and sixth of her career. With those 14 rebounds, Cotton became the 24th Cowgirl in program history to reach the 500 rebound milestone. The 14 rebounds also tie the most by any Mountain West player this season. Senior Marta Gomez poured in 15 points of her own while corralling a season-high eight rebounds.

“Marta only gets one three tonight, and that’s one of hers down the stretch,” Legerski said. “Cardiac kids step up when they’re supposed to step up. I thought Bailee Cotton showed us great senior leadership. To have a double-double go for 16 points and 14 rebounds, and more importantly, of the 14 rebounds, eight were offensive. That gives us eight more possessions, and in a game of this caliber, of this type, each one of those possessions mattered.”

Clara Tapia efficiently ran the Cowgirl offense, collecting five assists and zero turnovers, while freshman Quinn Weidemann and Erjavec each added three helpers. Erjavec also had two steals, and has had at least one steal in every game to start her Cowgirl career.

Cotton opened the scoring with a strong spin move in the post for an easy layup. After a Rusk layup, the Pioneers tied the game with four straight points. The teams then traded leads, and Denver held a 9-8 advantage at the 4:50 mark as the teams stopped for the media timeout. Rusk drilled a corner three out of the timeout, but a pair of Pioneer free throws tied the game yet again.

Gomez and Cotton each scored, and Denver converted two free throws to keep it a one-possession game at the 2:00 mark in the opening quarter, 15-13. But the Cowgirls found a rhythm as Erjavec hit a three, and Gomez split a double-team to find Tucker for a layup for a quick 5-0 run. After a pair of Pioneer free throws, Gomez hit a jumper at the buzzer to send the Cowgirls into the second quarter with a 22-15 lead.

The teams traded baskets in the second quarter before a wild sequence ended with a Denver layup to pull them within three, 24-21, with under eight minutes to play in the frame. The Pioneers answered a Gomez layup with a three-pointer of their own, and Denver moved within two points. After trading threes, the teams entered the media timeout with Wyoming holding a 29-27 lead at the 4:58 mark.

Out of the timeout, the Cowgirls used an 11-0 run, the final seven of which were scored by freshman Tereza Vitulova, to push the lead to 40-27 with 2:10 left in the first half and force a Denver timeout. The stoppage didn’t slow down the Cowgirls, as Tapia drained a three to push the run to 14-0, and Denver was in a 4:21 scoring drought. Denver’s Loven ended the Denver drought, as the nation’s leading three-point shooter drained a long trey at the buzzer. The Cowgirls entered the half leading 43-30.

Cotton was strong on the offensive glass to start the half, but the teams traded points much like they did to start the second quarter. She had four offensive boards in the first two-and-a-half minutes, and scored six points off those rebounds. At the media timeout, the Pioneers had an active 6-0 run, cutting the Cowgirls lead to 51-40 with 4:29 left in the third quarter.

The Pioneers increased their run to 13-4 to cut Wyoming’s lead to 55-47 with 1:36 left in the quarter. The Pioneers ended up making their final five shots of the quarter, and Wyoming’s 13-point halftime lead was trimmed to seven points, 59-52, as Gomez hit a layup at the buzzer.

Denver scored the opening points of the quarter on a layup, but the Cowgirls answered with a Weidemann three-pointer. However, the Pioneers started the quarter on an 8-4 mini run, cutting the Cowgirl lead to three, 63-60, as Legerski called timeout with 6:56 remaining. With the Cowgirl’s unable to score for 3:16, the Pioneers took a 64-63 lead with 4:34 to play. Erjavec took over and hit a corner three. Then, after a stop, Erjavec was fouled on a dribble-drive layup, and converted the old-fashioned three-point play at the 3:59 mark. It was the first free throw attempt of her young career. Gomez capped an 8-0 Cowgirl run with a long jumper, but a Loven field goal made the score 71-66 for Wyoming, and Denver called a timeout.

After the teams traded threes, Legerski called a timeout at the 1:47 mark with the Cowgirls up 74-69. After Denver’s Courtney Smith made her third three of the game, Denver stopped play trailing by two, 74-72. Rusk drove to the paint and found Gomez for a left-wing three to put Wyoming up 77-72 with 26.2 seconds remaining. But, Denver’s Samantha Romanowski scored in the paint with 14.3 remaining, making it a one-possession game. With 4.7 seconds left, the Pioneers sent Cotton to the line. She made one-of-two free throws to make it a two possession game, and the Pioneers missed a desperation three, ending the game 78-74 for the Cowgirls.

Wyoming continues their four-game home stand when it hosts Idaho on Saturday, December 8. Tip is scheduled for 1:00 p.m., and the game will be a double-header with Cowboy wrestling. The Cowboys take on North Dakota State in the Arena-Auditorium at 5:00 p.m.