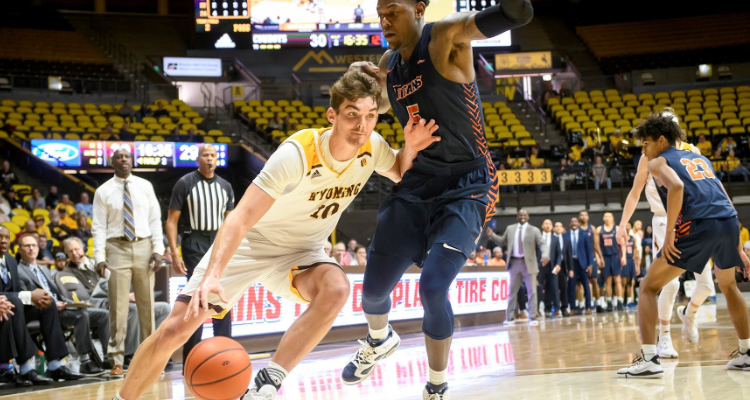 LARAMIE, Wyo. – The Wyoming Cowboys (1-2 overall) nearly erased an 11-point deficit in the final six minutes, but Cal State Fullerton (1-2 overall) held on late to take the contest 60-53 in the Arena-Auditorium on Wednesday evening. The Pokes were hindered by 15 turnovers that saw the Titans score 20 points off the Wyoming miscues.

“The fight I saw from our guys to come back from down nine late in the game and get it to one point with a little under two minutes to play was a positive,” Wyoming head coach Allen Edwards said. “I like the fight in our guys from the perspective of being where we want to be with our defensive goals, but I thought where we struggled tonight was guarding the three-point line.”

Wyoming and Cal State Fullerton each shot 39 percent for the evening going 21-of-54 from the field. It marked back-to-back home games Wyoming has held the opposition to under 40 percent from the field. The Titans hit a season-high nine three pointers for the night. Wyoming held a 37-36 advantage on the glass for the evening. Wyoming’s bench also added a season-high 15 points.

“What I shared with the team after the game was us digging holes for ourselves — obviously starting the game down 9-0,” Edwards said. “Then we had a period in the second half where we turned the ball over four consecutive times and gave them a 10-0 run that put us down eight. Offensively for us, I thought the struggle was more about us turning down what we call ‘one mores’ where we settled for some shots that if we would have made one more pass we would have created a better shot.”

The Pokes offense got off to a slow start in the opening minutes, which allowed Cal State Fullerton to jump out to a 9-0 lead in the first four minutes thanks to a trio of three pointers. Sophomore Trevon “TJ” Taylor halted the Titan run with an offensive rebound and put back.

Freshman Kenny Foster hit his first career shot and Hendricks and Taylor added triples to make it an 11-10 game in favor of the Titans with 11:27 left in the half. Maldonado would join the scoring and tie the contest at 12-12 halfway through the frame.

A pair of free throws from sophomore Hunter Thompson gave Wyoming an 18-17 lead with 5:55 left in the first half. It was the first lead for the Pokes in the contest. Hendricks hit his second triple of the contest to push the UW lead to 24-20 with 3:51 remaining in the half.

Wyoming would close the half on a 12-5 run to take a 30-25 advantage into the break. Wyoming shot 43 percent from the field in the first half holding the Titans to 36 percent.

The Wyoming offense struggled to find rhythm in the opening minutes of the second half. The Titans opened the half on a 6-1 run to tie the contest at 31-31 nearly four minutes into the half. Maldonado added four-straight points to give Wyoming a 35-33 lead after the Titans took a brief advantage with 12:54 left.

The Titans went on an 8-0 run over two minutes to build a 43-35 advantage with 9:42 left in the game. The run was stopped by Hendrick’s third triple of the game seconds later. Cal State Fullerton would build the lead to 11 points at 53-42 with six minutes left hitting 4-of-5 field goals.

The Pokes went on a 9-0 run capped by a Foster triple and Taylor layup for a 53-51 game with 2:34 left in the contest. Cal State Fullerton’s Austin Awosika hit a jumper with 1:30 left to build their lead to 56-53. The Titans would then tack on free throws to take the contest 60-53.

The Cowboys return to action Saturday hosting Oregon State for a 7 p.m. matchup in the Arena-Auditorium. The game will be carried live on Facebook by Stadium.