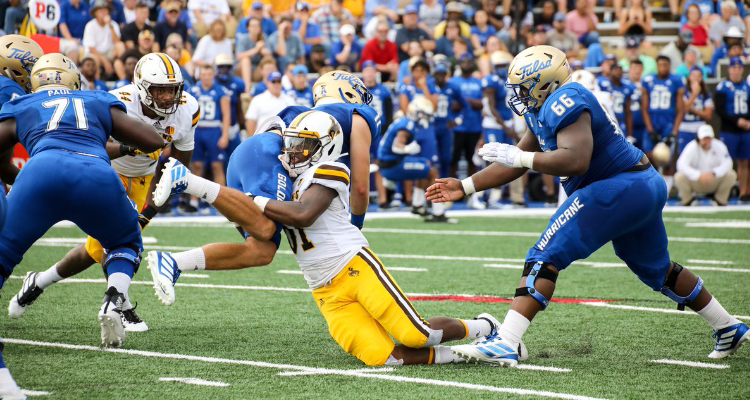 TULSA, OK.  – The Cowboys (3-1 overall) were two yards away from a go ahead touchdown in the final 50 seconds, but a late fumble helped lift Tulsa (2-2 overall) past Wyoming 24-21 on Saturday afternoon in H.A. Chapman Stadium in Tulsa, Oklahoma.

The Pokes recorded two fourth-quarter touchdowns and took a 21-17 with five minutes left. The Cowboy touchdowns included a 53-yard pass from quarterback Sean Chambers to Ayden Eberhardt and a 15-yard run from Chambers.  But a 19-yard run by Tulsa’s Shamari Brooks with 3:26 left and the late turnover gave the Golden Hurricane the win and broke the Cowboys seven-game winning streak.

“I think it is a mark of our football team that we have guys who compete when they face adversity,” said University of Wyoming head coach Craig Bohl.  “Our guys stayed in the game and battled.  I think it kind of mirrors where Sean (Chambers) is at.  I made the decision to switch quarterbacks, but Sean (Chambers) came back into the game and kept in the fight.  He kept challenging himself and his teammates, and I think that is a message for our entire football team.

“This was a game that was going to come down to a play or two here or there.  I was concerned about our depth coming into the game — the number of players we had injured, particularly in our secondary and with our running backs.  But it was an opportunity for some younger guys to get some meaningful reps.

“I’m proud of the whole group.  Certainly, we’re disappointed in the loss, but this team has a can do attitude and a team attitude.  These guys do rally around one another.  It was scary when Logan (Harris, junior offensive guard) was down.  We’ll get some more information on him.  I know he is hospitalized right now.

“I want to applaud the Tulsa team and Coach (Philip) Montgomery.  They’re real gentlemen.  It was a hard fought game.”

Cowboy offensive guard Harris was taken from the field in an ambulance.  No more details were available at the time of this story.

The Pokes recorded 14 tackles for loss for the most in the MW era of Cowboy football. The Pokes also recorded seven sacks for the afternoon. The UW defense was paced safety Alijah Halliburton with 17 tackles tying a career high with 2.5 tackles for loss and a sack. Defensive end Victor Jones added a career-high eight tackles and Solomon Byrd added six tackles, 2.5 sacks and a forced fumble and recovery.

The Cowboy offense was paced by Chambers rushing for 83 yards and threw for a career-high 193 yards with a touchdown. He added two rushing touchdowns with a long rush of 33 yards. Wide receiver Austin Conway grabbed three passes for 51 yards.

Wyoming was outgained 437 to 357 in the contest. Wyoming threw for a season high 214 yards and rushed for 143 yards. The Golden Hurricane passed for 354 yards for the game on 25 pass completions.

The Cowboys got on the board first with an impressive nine play, 74-yard drive that was capped with a 33-yard touchdown run from Chambers. It marked the first time this season that Wyoming scored on its opening drive. Chambers went 3-of-3 passing on the drive for 28 yards. The Pokes used back-to-back sacks on Tulsa first drive to force a punt and set up the score.

Neither team would score, as both Tulsa and Wyoming would miss field goals. The Golden Hurricane got on the board with 2:49 left in the first half on a 56 -yard pass from Zack Smith to Keylon Stokes to make it a 7-7 contest, as it was a part of a three play drive that lasted 16 seconds.

The Golden Hurricane would take a 14-7 lead into the half with a five play, 66-yard drive that ended with a 37-yard pass from Smith to Sam Crawford Jr. with 1:10 left in the half. The Golden Hurricane outgained the Pokes 261 to 144 in the first half including nearly 200 yards in the second quarter.

Tulsa would add to its lead in the early portion of the second half with a 29-yard field goal from Jacob Rainey to make it a 17-7 contest with 9:26 left in the third quarter. The Cowboy defense held deep inside their own territory.

ESPN Networks announced that the UNLV at Wyoming football game on Saturday, Sept. 28 will be televised on ESPNU.   Kickoff will be at 6 p.m., M.T., from Jonah Field at War Memorial Stadium in Laramie, Wyo.  The game will also be broadcast on AM 1240 KASL along with the 25 other affiliate radio stations of the Cowboy Sports Network beginning with the pregame show one hour prior to kickoff.

Wyoming Athletics is asking all Cowboy fans to participate in the “White Out” of War Memorial Stadium by wearing White t-shirts. The goal is to have the entire stadium blanketed in white. More information on the event along with link to Brown and Gold are available at GoWyo.com/WhiteOut.