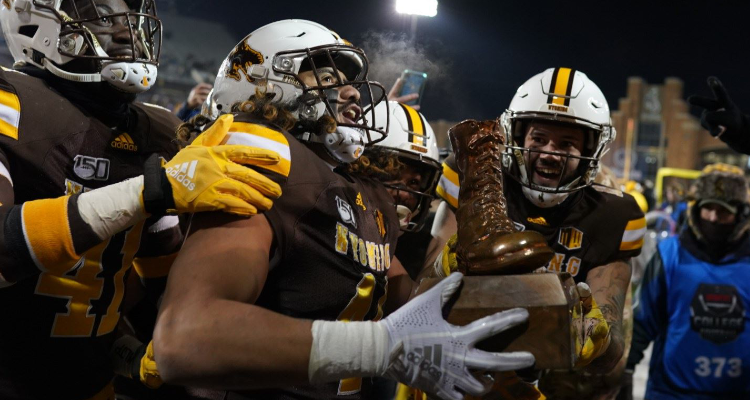 Laramie, Wyo. – It was a night that had a storybook ending for the Wyoming Cowboys. The Pokes captured their fourth consecutive win over rival Colorado State, with a 17-7 home victory. Wyoming improved to 7-4 on the season and completed an undefeated home season.

The Cowboy defense, which entered the game ranked No. 15 in the nation in scoring defense, held CSU to a season low seven points. Wyoming’s offense accounted for 273 yards of total offense and once again did not commit a single turnover.

In the Bronze Boot portion of the series, Wyoming now leads 28-24. The two teams have met for the last 74 consecutive seasons beginning in 1946. Wyoming has won 43 of those meetings since 1946 to CSU’s 31 victories. The overall series now stands at 48 victories for Wyoming, 58 for Colorado State with five ties.

There were many individual story lines, as well. Senior captain Logan Wilson intercepted a pass on CSU’s final possession of the game to end the Rams’ last offensive threat of the game. Senior place-kicker Cooper Rothe became Wyoming’s all-time scoring leader with 328 points, including a critical 48-yard field goal to give UW a 17-7 lead with 3:33 remaining in the game. Sophomore running back Xazavian Valladay recorded his first 1,000-yard rushing season, with 154 yards on the night and 1,023 for the season. Senior strong safety Alijah Halliburton, who has led Wyoming in tackles all season, had a game-high 13 tackles to record a 100-tackle season for the first time in his career (106 total tackles). Sophomore quarterback Tyler Vander Waal and freshman QB Levi Williams did an excellent job of running the offense and not committing a single turnover. Vander Waal passed for 56 yards to lead UW in passing, and Williams rushed for 49 yards.

Attendance for the 111th edition of the Border War was 21,152. That improved Wyoming’s total attendance for the season to 138,042 and its season average to 23,007 — both rank as the second highest attendance figures in school history for a six-game home schedule.

“It was a very emotional win,” said Wyoming head coach Craig Bohl. “I couldn’t be happier for our seniors to go out with another win. A lot of emotion in this game, a lot of big plays on both sides. It was back and forth, but our guys made plays when they had to.

“Credit to Mike Bobo and his staff, their team played well, it was a hard-fought game.

“That’s win number seven on the season for us. That’s a big win for us. I couldn’t be prouder of the seniors. They mean so much to our program. I think our guys really competed. There was a lot of hard-hitting. It was a defensive game. We were able to run the football and guys made plays. It was great to see Cooper (Rothe) go out there and deliver — it was a big kick. I couldn’t be happier for him.

“I want to say thanks to all the fans and students who showed up. With that type of weather, they brought a lot of energy and our players certainly fed off of that.”

For Wilson, he added eight tackles to go with his interception. Those eight tackles give him 404 for his career. He becomes only the fourth Cowboy in school history to record 400 tackles in a career, joining Galand Thaxton (467), Andrew Wingard (454) and Jim Talich (404). Wilson also moved past Dakota Cox of New Mexico (403 career tackles) for the No. 4 spot on the Mountain West career tackle list. Wilson’s 10 careeer interceptions now ties him for No. 3 in Wyoming history with his former teammate Wingard and Mark Thomas, who played for the Pokes from 1983-86. It was the third consecutive game that Wilson intercepted a pass.

Wyoming put the first points on the scoreboard when they put together an 11-play, 93-yard drive that took 5:30 off the clock. Key plays on the drive included a 13-yard pass from Vander Waal to Raghib Ismail Jr. for a first down that was followed by a 15-yard unsportsmanlike penalty by Ismail. True freshman quarterback Williams was inserted into the lineup on the drive for his first appearance of the season and his career. He gained five yards on his first carry. Vander Waal came back in the game at QB on the very next play and threw a key block for Valladay to free him for a 29-yard run from the Wyoming 39-yard line down to the CSU 32. Williams returned on the following play and rushed for four yards to the 28. On the play Colorado State was called for an unsportsmanlike penalty, moving the ball to the Ram 14. The play was reviewed by the officials and a targeting penalty was added against Colorado State defensive end Jalen Bates, who was then ejected from the game. The targeting penalty moved the ball to the CSU seven-yard line. Rushes of five yards and one yard by Valladay was followed by a one-yard TD run by Vander Waal. It was the Cowboys’ longest scoring drive of the season. UW’s previous long drive of the season was a six-play, 92-yard TD drive at Tulsa.

Colorado State would answer on their next possession, with a 13-play, 75-yard drive of its own, taking exactly seven minutes. Ram quarterback Patrick O’Brien connected three times on the drive to tight end Trey McBride for gains of 16, 18 and 17 yards. On a second and 10 from the Wyoming 19-yard line, O’Brien completed an 18-yard pass to wide receiver Warren Jackson, giving the Rams a first and goal at the UW one-yard line. On the next play, Wyoming tackled CSU running back Jaylen Thomas for a one-yard loss and Jackson was called for a facemask penalty against Cowboy cornerback Azizi Hearn. The result of the play moved the ball back to the UW 17-yard line still first and goal. O’Brien came back to hit wideout Dante Wright for 10 yards. Two plays later, Cowboy nose tackle Mario Mora was called for an unsportsmanlike penalty, taking the ball to the Cowboy three-yard line. O’Brien would cap off the TD drive with a pass to Jackson to tie the game at 7-7. That is how the first half would end.

The second half began with both Wyoming and Colorado State going three and out on each of their first possessions. CSU had a third and one and a fourth and one from their own 44-yard line on its first possession of the second half. Quarterback O’Brien was tackled for no gain on both plays, and Wyoming would take over on downs.

On the ensuing possession, the Pokes took only 10 plays to move the 44 yards for its second touchdown of the game. On the drive, Wyoming gained all 44 yards of the drive on the ground with Valladay, Williams and redshirt freshman Brett Brenton sharing the carries before Williams scored the first rushing touchdown of his career on a one-yard TD run. That would be the only score of the third quarter, and Wyoming took a 14-7 lead into the fourth.

Colorado State’s lone scoring threat of the fourth quarter came on its first possession as the Rams drove down to the Wyoming 31-yard line. On a fourth and two from the 31, CSU attempted a 50-yard field goal but place-kicker Braxton Davis would miss the kick wide left.

With 9:17 remaining in the game, Wyoming took over on its own 40-yard line after the Cowboy defense denied Colorado State on a fourth down and six play. The Pokes would proceed to drive 28 yards in 11 plays and put Rothe in position for a 48-yard field goal attempt. The senior stepped up and calmly knocked the ball through the uprights to extend Wyoming’s lead to 17-7.

CSU’s final possession would see O’Brien connect with tight end McBride for 11 yards to the CSU 36-yard line. On second down, Cowboy linebacker Wilson would intercept O’Brien with 3:10 left in the game. The Cowboy offense would then run out the clock to secure the victory.

Wyoming is back in action on Saturday, Nov. 30, when the Cowboys travel to Air Force for their regular-season finale. Kickoff is scheduled for noon.