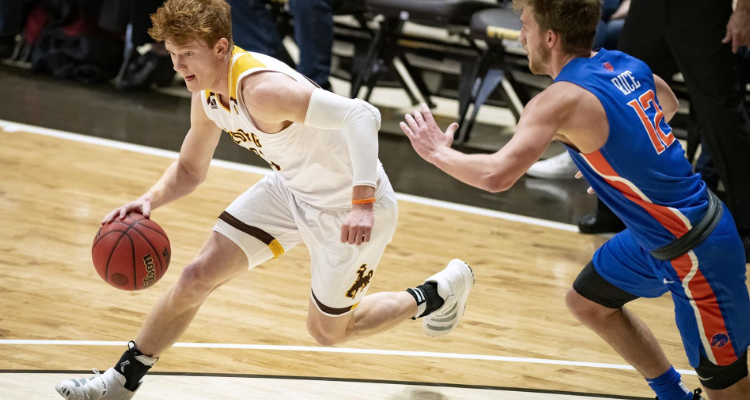 LARAMIE, Wyo. – The Wyoming Cowboys could not hold off second-place Boise State in a 67-62 loss on Tuesday evening in the Arena-Auditorium in Laramie. Wyoming led five points with under 10 minutes remaining, but the veteran Broncos finished the contest 13-of-14 from the line on their way to their fifth-straight win in a contest that saw 13 lead changes.

“We had our opportunities and I thought we did a good job of fighting,” UW head coach Allen Edwards said. “Where I thought we missed some opportunities were we were up three in the second half and missed the front end of a one-and-one to extend the lead to five. We had another situation where we missed the first of a two-shot free-throw opportunity. The stats say we were 13 of 17 from the free-throw line, but that is not the whole story when you miss the front end of a one-and -one.”

Wyoming was led in scoring by redshirt sophomore Hunter Maldonado with 17 points on the night with five rebounds and two assists. He is scored in double-figures 22 times this season. Freshman Kenny Foster added a career-high 12 points for the Pokes. Freshman Kwane Marble added 11 points and a team-high three assists. The two freshman each scored in double-figures in the first half. It marked the first time since Eric Platt and Ryan Dermody each scored 10 points in the first half against Chadron State on Dec. 31, 2007. Sophomore Trevon “TJ” Taylor added six points and led the team with nine rebounds for a career high.

“I thought our young guys really came to play,” Edwards said. “Kwane (Marble) had a really good first half. I thought Kenny (Foster) had one of his better games. Greg Milton is starting to come around, as well. And TJ (Taylor), we really put a load on him tonight with (Hunter) Thompson unable to go. Maldo of course played another outstanding game in spite of playing only 28 minutes due to foul trouble in the first half.”

“The second thing I told the team that hurt us was we had 17 turnovers,” Edwards said. “Granted Boise State had 16 of their own, but I thought our 17 came at some critical times in the second half when we got away from the team aspect of moving the ball, and we tried to make some individual plays that led to turnovers.”

Marble III got the Pokes off to a 7-2 start by himself in the opening three minutes of the contest. But Justinian Jessup hit back-to-back threes becoming the Mountain West’s all-time leader and gave Boise State a 8-7 lead at the 16:06 mark of the half.

The Cowboys went on a 6-0 run and built a 13-8 advantage at the 13:10 mark of the half with buckets from Hendricks, Marble and Maldonado. The Broncos would hit three-straight field goals and tie the contest at 16-16 halfway through the opening frame.

The Pokes would go scoreless for over three minutes, but Marble would get to double-figures and Greg Milton III added a transition bucket to give the Pokes a 23-20 advantage with under six minutes left in the period. Freshman Kenny Foster got hot for the Pokes and helping Wyoming maintain a three-point advantage until a pair of freebies from Alex Hobbs gave BSU a 29-28 with 2:22 left in the half.

Boise State would take a three point advantage at 33-30, but it was brief as sophomore Brandon Porter nailed a corner three-pointer to tie the contest. Neither team could find the bottom of the bucket as the contest went to the break tied at 33-33. Wyoming shot 48 percent from the field with Boise state countering at 44 percent.

Wyoming would carry a three-point advantage numerous times thanks to the soft drop back buckets of Maldonado halfway through the second frame. Wyoming would push the lead to five points at the free throw line. But the Broncos RJ Williams made it a one-point game at 52-51 with 6:48 left in the game.

Alex Hobbs would give the Broncos a 54-53 lead on a three pointer at the 5:15 mark of the second half, as Wyoming went without a field goal for nearly six minutes. He would add a second triple less than a minute later for a 57-55 Boise State advantage.

Maldonado would hit two free throws and a turnover led to him making a layup for a 63-63 game with 16 seconds remaining. Jessup answered with a pair of free throws to build a 3-point lead once again. Hendricks would get a great look from three with nine seconds left, but it came up short and the Broncos took the contest 67-62.

The Broncos were led in scoring by Alex Hobbs with 24 points for the night. He went an impressive 10-of-15 from the field. Williams added nine points and a game-high 13 rebounds.

Wyoming heads to New Mexico for a showdown with the Lobos on Saturday in a 4 p.m. start.