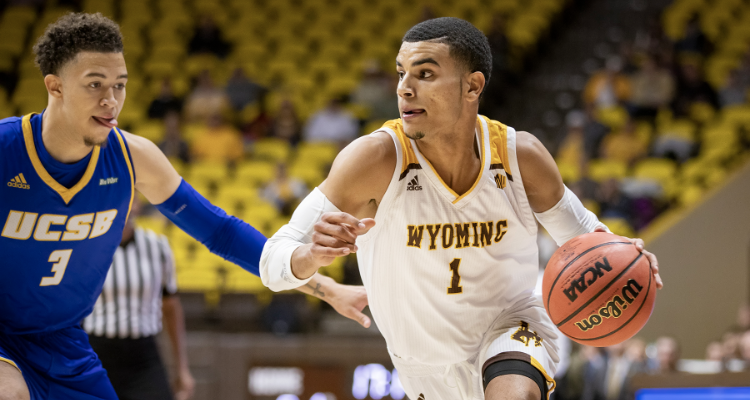 LARAMIE, WY.  – The Wyoming Cowboy basketball team fell to UC Santa Barbara on Tuesday night in the season opener, dropping a 76-66 contest to the Gauchos at the Arena-Auditorium in Laramie, Wyo. Senior Justin James led the Pokes with 20 points and 11 rebounds for his eighth career double-double. UCSB shot 51 percent from the field for the night and shot 56 percent from the three-point line in the first half.

“I thought the guys played gritty,” UW head coach Allen Edwards said. “We had opportunities, but at the point where we had just a one-point deficit and we missed a free throw to tie it, after that we started gambling rather than continuing to play solid.”

James did most of his damage in the second half with 17 points. He passed Marcus Bailey for 18th in career scoring, as he now has 1,375 points. James also added a team-high four assists and went 10-of-14 from the free throw line.

“What I love about J.J. is while we know his ability to play against anyone, I like the way he has believed in this process with these new guys,” Edwards said. “Obviously it was a blow losing (Hunter) Thompson in the middle, but I thought J.J. did a great job of rebounding the basketball. He also led us in assists with four. He didn’t shoot it particularly well tonight, especially from three. But he’s special.”

Redshirt freshman Hunter Thompson added 10 points in his first career game for Wyoming. He was 4-of-6 from the field on the night. He left the game in the second half with an injury, as he played 15 minutes for Wyoming. Sophomore Hunter Maldonado added 12 points with senior Nyaires Redding finishing his night with nine points. Junior Jake Hendricks added eight points and two assists off the Cowboy bench.

“I’ve been high on Hunter (Thompson) because he can do a lot of different things,” Edwards said. “He really knows how to play, has a good basketball IQ. He can stretch a defense, with his ability to shoot on the perimeter. He was making a difference before he went out.”

The Pokes shot 36 percent from the field going 21-of-58 for the night. Wyoming was 5-of-29 from the three point line for 17 percent. UCSB was solid offensively in the second half shooting 52 percent and going 11-of-13 from the charity stripe.

It was the Thompson show early for the Brown and Gold, as the Wyoming native scored the first five points of the game for the Cowboys with a fade-away bank shot and a three pointer. The run by Thompson gave Wyoming an early 5-2 lead.

The Gauchos went on a 6-0 run to take a 8-5 lead five minutes into the half, as the Pokes went scoreless for nearly three minutes with the run being halted by a James layup. But UCSB followed that with back-to-back triples to make it a 14-7 game with just over 13 minutes left in the half.

The Pokes used a 7-2 runn to make it a 17-17 contest with just under nine minutes in the first frame. Hendricks hit a three-pointer to spark the run for Wyoming, as it was his first career points. Maldonado helped the Cowboys build a 24-23 lead with six minutes left, as he scored seven-straight points for UW.

The two teams battled with UC Santa Barbara taking the lead back at 32-31 with 2:26 left in the first half. The teams exchanged the lead after that with the Gauchos closing the half on a 6-0 run with all six points coming from JaQuori McLaughlin for a 39-35 lead into the half.

UCSB was 5-of-9 from the three-point line in the first frame, as Wyoming struggled going 4-of-16 for 25 percent.

The Gauchos opened the second half building their lead to nine points at 45-36 in the opening minutes of the second half. The Pokes cut the deficit to 47-44, as James and Redding led the Pokes to an 8-4 run.

UCSB went on an 8-0 run to make it a 55-44 game with just under 13 minutes left in the contest. The Gauchos shot 54 percent from the field to that point in the half.

Wyoming would not go away going on a 12-2 run led by Thompson and James to cut the deficit to one point at 57-56 with under nine minutes left. James and Thompson got into double-figures during that stretch of play.

The Gauchos built that lead back to seven points at 69-62 with just over two minutes. The Pokes battled late, but couldn’t muster a comeback falling 76-66.

The Cowboys return to action on Saturday heading to Pac-12 foe Oregon State for a Saturday afternoon matinee at 1 p.m. MT.