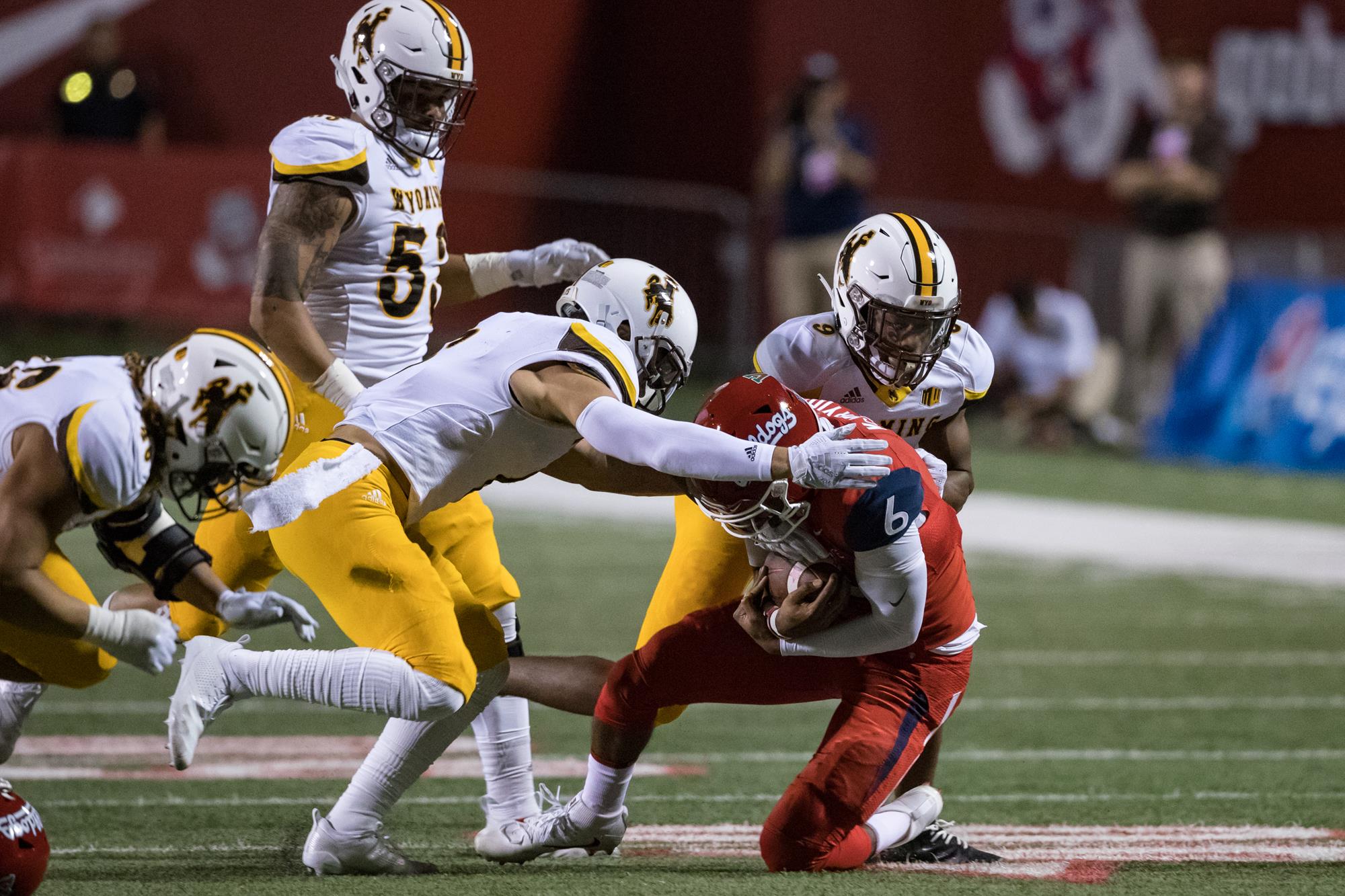 FRESNO, CA. – After a defensive battle to open the contest, the Fresno State (5-1, 2-0 MW) offense used an effective attack to defeat the Wyoming Cowboys (2-5, 0-3 MW) 27-3 on Saturday night in Bulldog Stadium in Fresno, Calif. The reining West Division champion threw for 287 yards on the evening, as the Cowboys held Fresno State to 13 points under their season average.

“Coming out of the gate we got off field defensively and offense moved the ball,” UW head coach Craig Bohl said. “As the game progressed Fresno State did a great job defensively. We had a hard time completing passes. “Beating a good team like this requires on-point football. We have to get ready to play Utah State on Homecoming next week in Laramie.”

The Bulldogs pinned the Cowboys deep inside their own territory all night, as Wyoming started five drives inside its own 15-yard line. Fresno State started their drives on their own 37 yard on average for the contest. Wyoming held Fresno State to only 43 percent on third-down, as the Bulldogs were well over 50 percent for the season.

“The field position was created by lack of us getting off the field and creating turnovers,” Bohl said. “I think Fresno is a good team, but we need to play better in all three phases. They are a team that doesn’t beat themselves. Their quarterback did a nice job and we need to make some adjustments offensively.”

Senior running back Nico Evans rushed for 58 yards and has 668 yards on the season, as he is averaging 133.6 yards per game. Redshirt freshman quarterback Tyler Vander Waal threw for 117 yards on 12-of-32 passing.

Junior kicker Cooper Rothe, who connected on field goal on the Pokes’ opening possession is 9-for-9 this season and has made 12-straight attempts dating back to last season.
The Wyoming defense was led by junior safety Alijah Halliburton and junior linebacker Cassh Maluia with eight tackles. Maluia also added 1.5 tackles for loss and a pass break up on fourth down to halt a Fresno State scoring chance.

Wyoming got on the scoreboard first for the second-straight week, as junior kicker Cooper Rothe connected on a 44-yard field goal nearly four minutes into the game. The drive was set up by Vander Waal going 3-of-3 through the air and Evans rushing for 20 yards.

Fresno State responded with a touchdown with 7:05 left in the opening quarter. Quarterback Marcus McMaryion found Jared Rice up the seam for the 35-yard score. The two-play drive was set up on a punt miscue that gave Fresno State the ball in Wyoming territory.

The two teams would then engage in a defensive and field position battle until Fresno State extended its lead on a quarterback sneak by McMaryion on fourth and inches. The Pokes’ defense held strong, but the score gave the Bulldogs a 13-3 advantage with 52 seconds left in the first stanza.

The Bulldogs added to their lead on their second drive of the second half to make it a 20-3 contest. Fresno State drove 47-yards on six plays and extended the drive on 25-yard passing play on third down. McMaryion threw his second touchdown of the game this time to David Tangipa from three yards out.

McMaryion added to the led with 3:11 in the third quarter, as this time he used his legs scrambling for a six-yard score to make it a 27-3 game.

McMaryion finished his day with 287 passing yards on 22-of-32 passing. He also led the Bulldogs with 53 rushing yards on the night. Linebacker Jeff Allison, one of the Mountain West’s top tacklers had 13 tackles on the night.

The Cowboys will host Utah State for Homecoming next Saturday in War Memorial Stadium for a 12:30 p.m. MT start on AT&T SportsNet.