Cowboys Fall to Lobos in First Round of Mountain West Championships 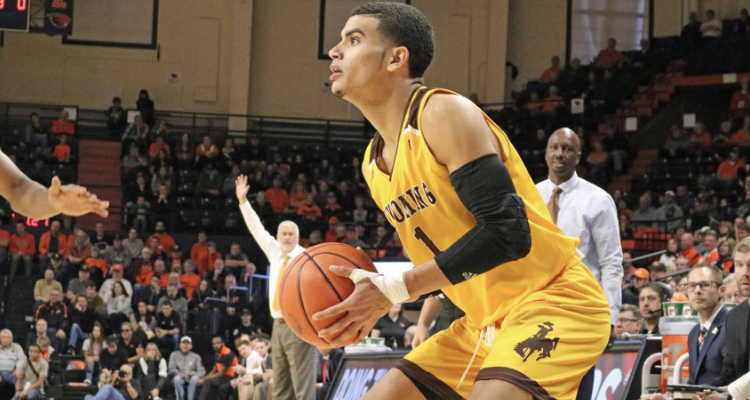 Cowboys Fall to Lobos in First Round of Mountain West Championships

“I thought obviously in the first half we played some of our best basketball, defending, also rebounding the basketball, even within their pressure,” Wyoming head coach Allen Edwards said. “I thought they tried to speed us up, which I thought, at times, I thought they were successful. But the second half I thought, again, some self-inflicted wounds. I thought we got a little bit careless with the basketball and wasn’t assertive, in a sense o trying to attack their pressure but also being smart on the other end after taking it and getting it across half court.”

James had a team-high seven rebounds and tied junior AJ Banks for the team lead with four assists.

Both offenses got out to a slow start in the opening four minutes of the contest. James led the Pokes to an early 7-4 lead with five points and added an assists on a bucket from Banks that opened the contest.

Hendricks helped extended the Pokes lead to six points at 12-6 with 14:18 left in the first half. His basket was following a sweet low post move by redshirt freshman Hunter Thompson for his first basket of the contest.

James hit an NBA range three with 11:06 left in the half to push the Wyoming lead to 11 points at 19-8. To that point of the ball game, the Pokes held the Lobos to 15 percent from the field going 2-of-13. The Pokes would build the advantage to 26-11 on yet another James three, as he was fouled and added a free throw.

The Lobos followed with an 8-3 run to make it a 29-19 game with 7:20 left in the first frame. It was led by New Mexico’s first three pointers of the game. New Mexico would cut it to as little as seven points, but a three from Hendricks a pair of freebies from Banks would give UW a 34-22 advantage with 4:19 left in the frame.

The Lobos opened the second half forcing three turnovers and cutting into the Pokes lead. New Mexico made it a six point game at 40-34. But Banks and James helped push the lead back to 13-points with a 7-0 run to make it a 47-24 lead for the Pokes with under 15 minutes remaining.

The Lobos would hold the Cowboys scoreless for over five minutes and went on a 15-0 run to take a 49-47 lead with just under ten minutes remaining. The Lobos went five of six from the field during that stretch of play.

After James tied the game at 49-49 with his 21st point of the game, passing Flynn Robinson for third in UW history, the Lobos would go on a 5-0 run to build a 54-49 advantage. The Pokes would cut the deficit to three points twice, but an and-one from Keith McGee made it a 61-55 game with 5:29 left.