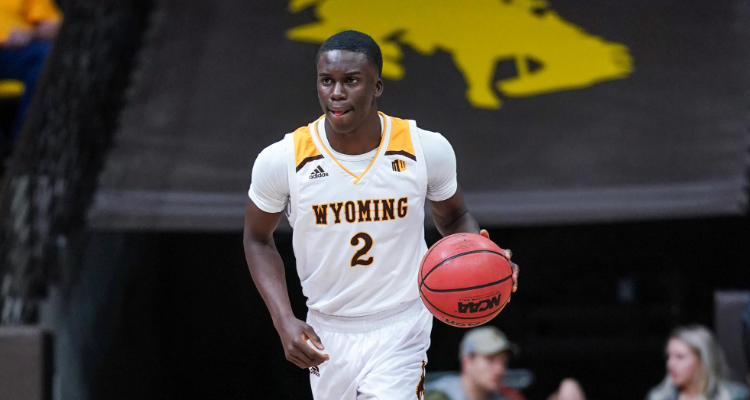 EL PASO, TX  – The shorthanded Cowboys battled, but cold shooting in the first half once again hindered Wyoming (3-9 overall) in a 76-65 loss to longtime rival UTEP (5-6 overall) on Saturday evening in the consolation game of the Don Haskins Sun Bowl Invitational in the Don Haskins Center in El Paso, Texas.

“We struggled taking away the three point line tonight and their shooters got too many looks,” UW head coach Allen Edwards said. “I want our players to keep their heads up. At the end of the day in the sense of adversity at the other side of this will be something special. It is easy to put your head down, but we battle and we have to stay the course.”

Senior guard Justin James led the Pokes in scoring with 22 points. It was his 10th game with 20 or more points this season. He also added seven rebounds and four assists. Junior A.J. Banks had a career game with career bests with 18 points, eight rebounds and three assists. He was 6-of-10 from the field. Redshirt freshman Hunter Thompson and freshman Trevon “TJ” Taylor added eight points each.

“A.J. Banks took a step as a basketball player, as he was active on the defensive end of the floor and played with great confidence,” Edwards said.

“I tried to tell the team something positive before the break and one of the things we did well tonight was rebound the basketball,” Edwards said.

Banks helped the Pokes race out to a 7-1 lead in the opening two minutes. He scored four of Wyoming’s points with Thompson adding a three-pointer. The Miners responded with a 7-0 run to take an 8-7 lead minutes later.

The two teams would exchange the lead several times following the Miner run. Taylor paced the Pokes with six straight points for the Brown and Gold. He got to the line four times during the stretch making all of his attempts, as he also added a jumper for a 15-15 stalemate with 13 minutes left in the half.

The Miners would use a transition three and a pair layups to take a 22-15 lead on the Pokes halfway through the frame. Wyoming went scoreless for over five minutes during the run by the Miners.

Wyoming would pull within three points on a pair of occasions, but UTEP pushed the lead to 11 points at 32-21 with 3:10 left in the first half. The Miners used an 8-0 run and held the Pokes scoreless for over three minutes during the run.

The Pokes used a 6-0 run to make it a five point game at 32-27 with a tick under two minutes left, as Banks highlighted the run with a triple. UTEP’s Kobe Magee hit a three-pointer to close out the scoring for the half for a 35-27 Miner lead at the break. Wyoming shot 33 percent from the field in the opening half, while UTEP shot 50 percent.

UTEP built the lead back to double-digits to open the second half, but a 5-0 run with a triple from Banks and layup from James made it a 40-34 contest with 17:19 left in the game. The Pokes offense went cold for over four minutes, as the Miners built a 49-36 advantage. That lead was later extended to 18 points halfway through the half for the largest advantage of the game for either team.

The Cowboys will pull within 13 points on a nice dish from James to Banks in transition for a 69-56 game with 3:15 left in the game. The Pokes would make it a nine point game at 69-60 seconds later thanks to Banks.

Wyoming could not get any closer in the contest, as the Miners took the game 76-65.

The Miners were led in scoring by Evan Gilyard with 20 points all of which came from behind the arc. He went 6-of-9 from the three point line. Efe Odigie added a double-double with 12 points and a game-high 11 rebounds.

The Cowboys return to action in the final non-conference contest of the season on Dec. 29 facing Dixie State in the Arena-Auditorium for a 4 p.m.