Cowboys Football Falls to Utah State on the Road, 26-21 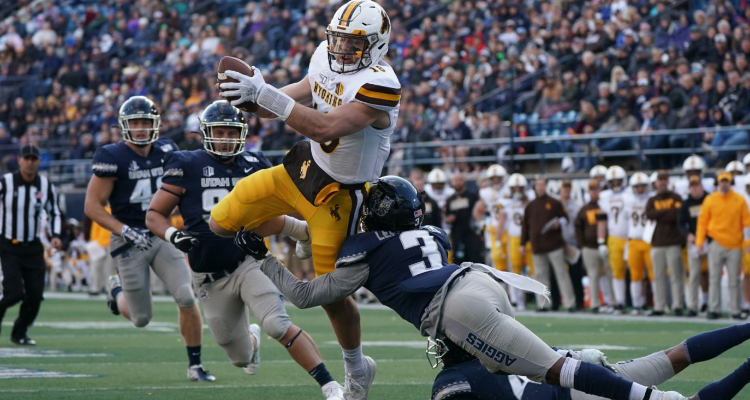 Cowboys Football Falls to Utah State on the Road, 26-21

The Pokes defense forced a three and out by the Aggies thanks to Redshirt freshman safety Rome Weber’s first career sack giving the Pokes the opportunity to take the lead with two minutes remaining. The Cowboys drove into Aggie territory, but sophomore quarterback Tyler Vander Waal was picked off and the Aggies took the Battle for Bridger’s Rifle.

“We made too many mistakes today,” Wyoming head coach Craig Bohl said. “Our players played very hard tonight and we can play a lot smarter. “We were very uncharacteristic with our turnovers today and we normally take care of the football very well.”

Senior linebacker Logan Wilson finished the contest with eight tackles for Wyoming, as he surpassed Kirk Morrison of SDSU for fifth all-time in MW history with 395. He also added an interception in the contest for the ninth of his career. He returned it for a score tying for the NCAA’s active lead in defensive touchdowns with four.

Sophomore running back Xazavian Valladay rushed for 114 yards on the afternoon to lead the Pokes. It was his fourth-straight 100 yard rushing performance and the fifth of the season. Senior tight end Josh Harshman tied a career best with six catches for 76 yards. Senior wide receiver Austin Conway added five catches for 64 yards. Vande Waal threw for 185 yards and rushed for two scores.

Both teams exchanged turnovers to open the contest. Junior defensive tackle Javaree Jackson recorded his first career interception batting the ball at the line of scrimmage followed by a diving catch. It was the seventh interception by a Wyoming defensive lineman since the 2016 season. The Pokes could not capitalize recording a fumble inside Utah State territory.

The Pokes drove deep inside Aggie territory in the closing minute of the first quarter, but the Pokes were stopped at the three yard line on fourth and short. But Wyoming didn’t have to wait long, as linebacker Cassh Maluia tipped a pass that was intercepted by Wilson and returned 10 yards to give Wyoming a 7-0 lead with 14:54 left in the second quarter.

Utah State got on the board with 11:35 left in the second frame on an 8-yard touchdown pass from Jordan Love to Siaosi Mariner. The drive was two plays and was the longest play from scrimmage for the Aggies this season.

The Aggies took a 14-7 advantage with 7:32 left in the half on Love’s second touchdown pass of the game finding Gerold Bright on a wheel right for a 35-yard score.

The Pokes responded using penalties by Utah State to go 61-yards on five plays to tie the contest at 14-14 with 5:34 left in the first half. Vander Waal scampered in from 11 yards out for his second rushing score of the season. Wyoming used two 15-yard penalties to set up the score.

The Aggies tacked on a pair of field goals to close the first half and took a 20-14 advantage into the break. Utah State outgained the Pokes by a mark of 308 yards to 152 yards with 253 yards coming through the air.

The Aggies returned an interception to the three yard line off Wyoming, but the defense held the Aggies to a field goal for a 26-14 game in the early goings of the fourth quarter. Conway had two big grabs for 34 yards to highlight the drive.

Wyoming made it a one score game on a five-yard rushing touchdown from Vander Waal with 6:52 left. Wyoming went nine plays and drove 75 yards on that scoring drive.

The Pokes had their shot late in the contest, but the Aggies took the contest.

Wyoming returns home for action next Friday evening at 7:30 p.m. against Colorado State in the 111th edition of the Border War.