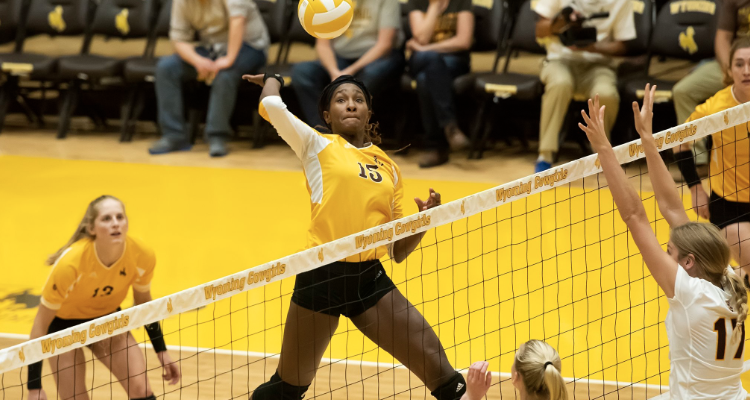 Wyoming opened the day with a rout, overwhelming Binghamton in a 3-0 match and outscoring the Bearcats by double digits each set. Halie McArdle and Jackie McBride led the Cowgirls in kills with nine apiece. Setter Cori Aafedt had a nice game as well on the offensive end, recording a match-leading 19 assists and setting a new career high with six service aces—falling just one short of tying the three-set school record. The Cowgirls combined for nine service aces, which counted as a new season high for any game so far this year. Defensively, the Cowgirls were active at the net with 8.5 total blocks, including eight from senior Reed Copeland. Wyoming spread the wealth with 10 players combining for 32 digs and libero Madi Fields leading the squad with nine.

In the evening match, the Cowgirls were able to close out Arizona State in four sets, 3-1, despite a late push from the Sun Devils. Wyoming was led by Reed Copeland, who posted a double-double with 11 kills and 11 blocks in the match for the first double-double by a Poke this season and the second of Copeland’s career—her first came in 2016 with 19 kills and 13 blocks against San Diego State. In all, four Cowgirls reached double figures in kills, led by McBride with 13, followed by Copeland and McArdle with 11 each, and junior Tara Traphagan with 10. Both Aafedt and sophomore Marissa Harmon eclipsed the 20-assist mark with 23 and 22, respectively. The Pokes turned in a .253 hitting percentage while holding Arizona State to a .192 mark. Defensively, Wyoming combined for 17 total blocks. Copeland’s 11 blocks was a new season high and fell just two short of her career best. McBride (6), Traphagan (6) and Lewis (5) each recorded five or more blocks as well. Fields reached double figures in digs with 14 to pace the Cowgirls to their 55 digs as a team.

The Cowgirls recorded a .402 hitting percentage as a team, holding Murray State to a .107 mark. Five Pokes finished with six or more kills—led by Copeland and junior Tara Traphagan with eight—and all five of those players finished with hitting percentages of .400 or above. Cori Aafedt led the Pokes in assists with 21. Defensively, Wyoming finished with 12 total blocks to the Racers’ one. Copeland finished just shy of her second-straight double-digit blocking effort with nine, followed by Traphagan with five. Ten of the 11 Cowgirls in the rotation recorded digs for a team total of 32, led by McArdle and libero Madi Fields.

Up next for the Wyoming volleyball team, a road trip to Ames, Iowa, to compete at the Cyclone Classic at Hilton Coliseum. Aside from the Cowgirls (8-1), the tournament features Iowa, Syracuse and host Iowa State.

The Pokes will open up the tournament on Thursday against the Cyclones, followed by a 2:30 p.m. MT contest with Syracuse on Friday. Wyoming will wrap up the event on Saturday at 11 a.m. MT against the Hawkeyes.

Iowa State heads into the weekend with a 6-4 overall record after a 1-2 performance at the Bluejay Invitational in Omaha, Neb., where they tallied a 3-1 win over Wichita State and a couple of losses to No. 14 Creighton and No. 7 Nebraska. Thursday’s match against the Cyclones will be the fifth match in the series between the two teams, with Wyoming taking each of the previous four.

The Hawkeyes ride a three-match win streak into the Cyclone Classic, tallying sweeps over South Dakota State, Drake and Eastern Illinois last weekend to get to 5-3 overall for the season.

Syracuse enters the weekend at 2-3 following a tough weekend at the Marquette Invitational, falling to No. 3 BYU, No. 10 USC, and No. 25 Marquette.

The event begins on Thursday at 5:30 p.m. MT against Iowa State.