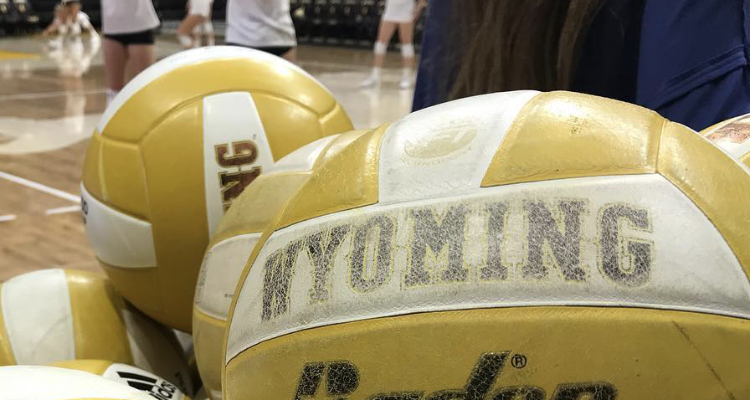 The Cowgirls (8-2) were led by senior Emily Lewis, who tallied nine kills on a .222 hitting percentage in the match. Reed Copeland led the Pokes in blocks, contributing on four of the team’s five total rejections. Junior libero Madi Fields finished with 18 digs to lead the team. Wyoming struggled to find an offensive rhythm, hitting a season low .152 for the match to Iowa State’s .238.

Wyoming got out to a slow start in set one, as the Cyclones jumped out to a 3-0 lead early and never looked back, going on to win the frame, 25-17.

The Cowgirls were able to settle in in the second set and put together a more consistent offensive groove. The Pokes hit .361 in the period and jumped out to an early lead; however, the two teams traded blows for much of the set, which included 11 ties and five lead changes, and Iowa State pulled away late for the 25-23 set victory.

The Cowgirls and Cyclones went back and forth early on in the third set, but a 6-0 run for Iowa State midway through the frame gave the Cyclones the lead for good, going on for the 25-20 clincher.

Friday Results:
The team’s attempt at a comeback came up short on Friday, when the Cowgirls lost their second match of the weekend to Syracuse.

After dropping the first two sets in the match, the Cowgirls (8-3) were able to take the third and fourth to force a fifth; however, Syracuse edged the Pokes in the final frame to take the match.

Wyoming’s offense was led by senior Emily Lewis, who scored a career high-tying 21 kills on a .347 hitting percentage, along with seven digs and four blocks. Setter Cori Aafedt tallied her third career double-double and first since 2015 with a career best 33 assists and season high 15 digs.

The Cowgirls combined for 16 blocks as a team, the most by the squad in a five-set match this season, led by senior Reed Copeland with nine. Junior libero Madi Fields recorded 20 digs in the match to lead all players.

Unable to find a steady offense, Wyoming dropped the first set, 25-18, to the Orange. The Cowgirls opened with a 2-1 lead, but Syracuse took control with an 8-1 run in response and never looked back, finishing off the frame to take the upper hand early.

In the second, the Pokes battled but came up just short again, 25-22. The two teams went back and forth in the frame, which featured 12 ties and seven lead changes, as Wyoming took a 22-20 lead late. The Orange would respond, however, going on a 5-0 run to finish off the period.

The Cowgirls were able to get on the board in the third, outlasting Syracuse in extra points for the 31-29 win to force a fourth set and keep the match alive. Wyoming and Syracuse traded points again in the third, combining for 14 ties and six lead changes. The Pokes were able to jump up, 22-18, late but another push from the Orange forced a tie at 25. A couple of ties later—and after the Cowgirls fought off four match points—the teams found themselves knotted at 29-all; with the match on the line, the Pokes got huge kills from Traphagan and Lewis to clinch the set.

The Cowgirls led the entirety of the fourth set, coming out with a 25-18 win to send the match to a decisive fifth set. The Pokes turned in a .243 hitting percentage with six blocks in the frame to overwhelm the Orange and extend the match.

The fifth set was another back-and-forth frame, as the teams switched leads five times; however, it was Syracuse that was able to run off a couple-straight points at the end of the period to win, 15-13.

Saturday Results:
On Saturday, the Wyoming volleyball team finished off weekend play at the Cyclone Classic, falling 3-1 to Iowa. Junior libero Madi Fields was named to the all-tournament team.

Wyoming (8-4) was led with double-doubles from Cowgirls Emily Lewis and Cori Aafedt. Lewis led the team in attacks with 15, while also recording 11 digs and a service ace. Aafedt turned in her second-straight double-double with a career-high 41 assists along with 13 digs. Two other Cowgirls turned in double figures in kills as senior Reed Copeland added 14 on a .423 hitting percentage and Faith Waitsman scored a career high 10 on a .240 clip.

Defensively, the Cowgirls were led by Copeland, who contributed on six of the team’s eight total blocks. Fields fell just a dig shy of tying her career high with 29, along with five assists.

The Cowgirls and Hawkeyes traded sets to open the match, with Iowa coming back to take the first, 25-22. Wyoming led for much of the opening frame, and eventually boosted their lead to 22-18 late; however, the Hawkeyes would remain aggressive to spark a 7-0 run to close out the set and start the match with the advantage.

The Pokes responded in the second, hitting an efficient .469 percentage to overwhelm Iowa offensively in the second set. The teams went back and forth for much of the early part of the frame, tied at 8-all early on. From that point, Wyoming got hot and outscored the Hawkeyes, 17-8, for the remainder of the set to take the 25-16 set win.

Iowa was able to close out the match in the following two sets, winning the third, 25-19, before edging the Pokes in the fourth, 25-22.

The Cowgirls will be back in action next week when they open up conference play on the road at San Jose State Thursday at 7 p.m.