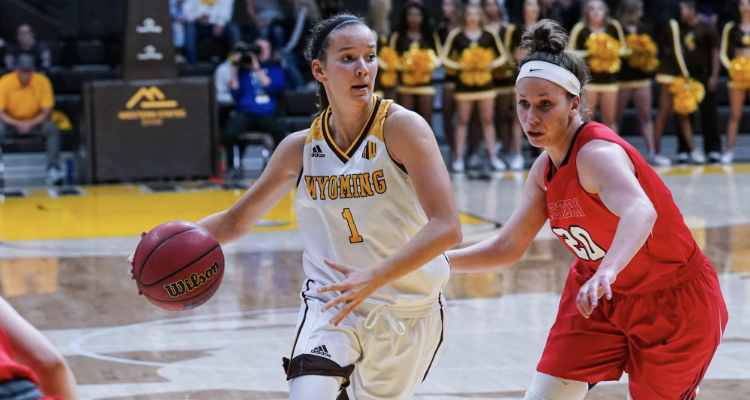 LARAMIE, WY.   –   The Cowgirls begin the 2018-19 season by hosting Chadron State this Wednesday, Nov. 7, at 6:30 p.m. in the Arena-Auditorium. The Cowgirls are coming off back-to-back 20+ win seasons and return three starters and nine letterwinners from last season’s team that went 13-5 in Mountain West Play.

The game will be broadcast live on the Mountain West Network, and can be heard across the 25 stations of the Cowgirl Radio Network with Reece Monaco on play-by-play and Wyoming Hall of Famer Margie McDonald with color commentary.

A LOOK AT THE COWGIRLS
In their exhibition contest against Western Colorado, the Cowgirls posted a 64-28 win. Freshman Tereza Vitulova posted a double-double with 14 points and 12 rebounds, senior Bailee Cotton stuffed the stat sheet with 12 points on 5-of-5 shooting while adding two rebounds, an assist, a block and a steal. Senior Rachelle Tucker recorded eight points and four steals, while senior Clara Tapia added four points and five assists. The Cowgirls shot 50.0 percent from the field on 27-of-54 shooting, while limiting Western Colorado to 15.4 percent shooting with only eight field goals made.

Wyoming returns three starters from last year’s team that put up a 22-11 record while going 13-5 in Mountain West play. The 13 conference wins ties a school record, while the Cowgirls put up back-to-back 20+ win seasons for the fifth time under head coach Joe Legerski. Junior Taylor Rusk is the top returning scorer, as she averaged 10.1 points per game last season. Senior Marta Gomez scored 8.5 points per game off the bench, and was named the Mountain West’s Sixth Player of the Year for the second season in a row. Cotton led the way defensively for the Cowgirls, bringing down 6.2 rebounds per game and collecting 1.2 steals per game. For her efforts, she was named to the Mountain West’s All-Defensive team. Tapia led the Mountain West with a 1.8 assist-to-turnover ratio and directed the Cowgirl offense by averaging 4.3 assists per game.

Head coach Joe Legerski is 289-177 overall at Wyoming and is entering his 16th year at the helm of the Cowgirls.

SCOUTING CHADRON STATE
The Chadron State Eagles return six letterwinners and three starters from last year’s team that posted a 6-22 overall record, including a 4-18 mark in Rocky Mountain Athletic Conference play. However, a key loss is Kalle Feddersen, as she led the team in scoring (15.3 PPG), rebounds (7.4 RPG) and assists (4.0 APG). Taryn Foxen returns as the team’s steals leader, swiping 1.5 steals per game, and Savannah Weidauer blocked 0.8 shots per game. Foxen is the team’s leading returning scorer, as she recorded 9.5 points per game last season.

Head coach Janet Raymer is in her third year at the helm of the Eagles, and owns a 13-40 record at Chadron State. She is a 1981 graduate of Adams State.

SERIES HISTORY AGAINST CHADRON STATE
The Cowgirls and Mountaineers have squared off 11 times in regular season history, most recently during the 2015-16 season. In that game, Wyoming earned a 74-50 victory, as the Cowgirls have won all 11 matchups. The series opener was a 52-18 win in 1973 at home. In 1988, the Cowgirls scored 101 points, the 12th most points in a single game in school history. That 101-46 win was the seventh-largest margin of victory in school history. All the games in the series have been in Laramie, with the exception of two neutral-site games in 1975 and 2005.

Following the Chadron State game, the Cowgirls will travel to Moraga, CA for a Friday night showdown against Saint Mary’s. The game is scheduled to start at 7:30 p.m. (MT) on Friday.