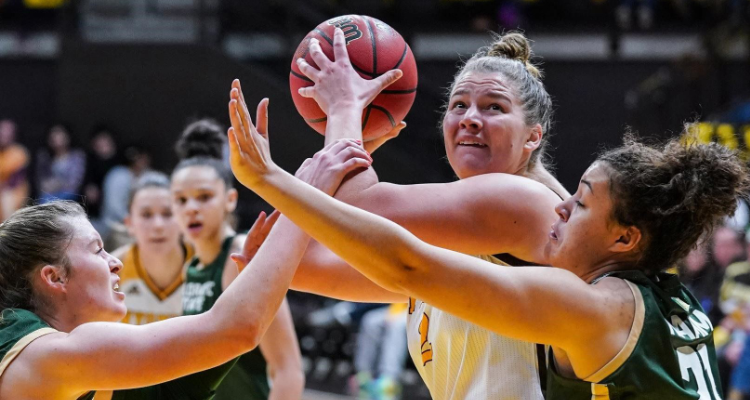 “Once again, I would tell you we played well enough defensively to win,” said head coach Gerald Mattinson. “Obviously, we gave up some free throws and stuff at the end, but when you basically into the late fourth quarter and you’re holding a team into the 40s, you have to find a way to score more than 40 yourself.”

Sophomore Tereza Vitulova had a team-high 16 points for Wyoming on an efficient 6-of-9 shooting day. She made a career-high two three pointers in the game and was a perfect 2-of-2 from the free throw line. Defensively, she added a block and a steal.

Senior Taylor Rusk nearly had the first double-double of her career with 10 points and a game-high nine rebounds. Rusk went 4-of-6 from the field and made her only three-point attempt. Rusk added an assist and a steal.

Sophomores Karla Erjavec and Quinn Weidemann each added at least five points, as Erjavec scored seven and Weidemann chipped in with five. Erjavec had a game-high four assists and grabbed two rebounds. Weidemann was 1-of-1 from the field, with that shot being a three, and scored two at the free throw line. Weidemann added four rebounds and a block to her stat line.

Wyoming had 15 turnovers that CSU converted into 11 points, while the 10 Rams turnovers only turned into two points for the Cowgirls. Wyoming had eight assists, five blocks and four steals on the day.

The Cowgirls had won four of the last five in the series before today’s loss, and it also snapped UW’s three-game conference winning streak.

The Rams opened the game’s scoring with a layup, but Vitulova scored on the other end to even things up. After an Erjavec three, the teams traded points to a 7-6 Cowgirl lead with 5:50 to go in the frame. A three by the Rams tied the game at 10, before an Erjavec layup gave the Cowgirls a two-point lead with 3:59 left in the quarter. Bradshaw scored a layup at the 1:51 mark to give UW a 16-14 lead, but the Rams tied it back up on their next trip down, and the quarter ended in a 16-16 tie.

Erjavec found Vitulova for a cutting layup to start the second, but the Rams converted a three to take a 19-18 lead. The teams traded threes, but a Rusk layup and a pair of Erjavec free throws put UW back in front, 25-22, with 4:46 to go in the half. After a Ram layup and four Cowgirl turnovers, Vitulova hit a three to keep UW’s four-point lead, 28-24, with 1:16 in the half. But, the Rams scored the final five points of the half and took a 29-28 lead into the locker rooms.

Colorado State scored a pair of jumpers in the paint to start the second half before Weidemann scored from beyond the arc to make it 33-31 for CSU. Freshman Jaeden Vaifanua ended a 3:32 scoring drought for UW with a pair of free throws, but the Rams held a 35-33 advantage with 3:56 to play in the quarter. The Rams took advantage of a dry spell from the field for UW, and built a 41-35 lead before Rusk scored from long range with just 19 seconds to play in the quarter, and the frame ended with CSU leading 41-38.

Weidemann scored a pair of free throws to start the fourth quarter, bringing the Cowgirls within one, 41-40. On their next possession, Erjavec found Vitulova for a layup, and CSU called timeout with 6:06 to play and UW in front, 42-41. Two free throws gave the Rams the lead back, but Vitulova scored free throws on the other end, and the Cowgirls took a one point lead, the 11th lead change of the game.

Out of the media timeout, the Rams converted again from the free throw line to regain the lead, and with 3:52 to play, CSU called timeout. Out of the break, the Rams scored back-to-back layups to go up by five, 49-44, with 2:26 to play. With just 55.2 seconds to play, CSU called another timeout, and converted an and-one play following the stoppage.

The Cowgirls started fouling, and made three before Vaifanua scored a layup to make it 54-46 for CSU. The layup ended a nearly five-minute scoreless drought for UW. The Rams added two more free throws before a three from sophomore Alba Sanchez Ramos made it a 56-49 final for CSU.

The Cowgirls return to action on Wednesday, Jan. 8, when they travel to face the San Diego State Aztecs at 7:30 p.m.