Cowgirls Drop Conference Opener on the Road to Boise State, 72-64 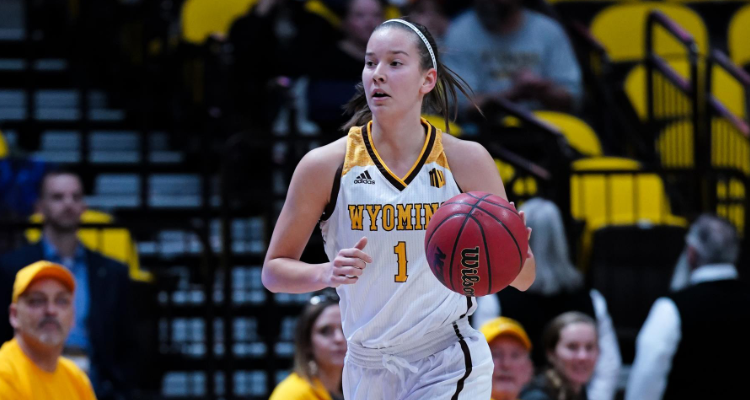 Cowgirls Drop Conference Opener on the Road to Boise State, 72-64

BOISE, ID.– The Cowgirls (7-3, 0-1 MW) opened their Mountain West schedule with a 72-64 loss on the road to Boise State (10-2, 1-0 MW). The Cowgirls had their four-game winning streak snapped and are still searching for their first road win of the season.

“I told the team in there, the way we competed tonight gave us an opportunity,” said head coach Joe Legerski. “I thought we made plays tonight that really kept the ball game close. We got up in the first half, they answered. They would get up, and we’d answer.”

The Cowgirls were led offensively by a season-high 18 points from junior Taylor Rusk and 15 points from Marta Gomez. Senior Bailee Cotton had a game-high and career-high-tying 14 rebounds and a team-best two blocks, while senior Clara Tapia directed the offense with a season-high-tying five assists. Freshman Karla Erjavec scored 10 points and tied her career-high with four assists.

The Cowgirls shot 45.0 percent (27-of-60) from the field, 31.6 percent (6-of-19) from three point range and a season-low 44.4 percent (4-of-9) from the free throw line. As a team, the Cowgirls had nine assists and 11 turnovers for just the second game this season with a negative assist-to-turnover ratio.

Boise State was led on the scoreboard by Riley Lupfer, who scored a game-high 22 points while Tess Amundsen chipped in 10 points. Braydey Hodgins had eight rebounds and Jayde Christopher registered a game-high six assists.

“Boise State has so many offensive weapons,” Legerski said. “You’re trying to help at times, and I thought for the most part, we did a good job. We had a couple breakdowns defensively, and good teams take advantage of you immediately. I thought Boise State did that.”

The Broncos ended the game shooting 47.5 percent (28-of-59) from the field, 41.7 percent (10-of-24) from three and 66.7 percent (6-of-9) from the charity stripe. Boise State had 15 assists to nine turnovers overall. BSU is just the second team to make double-digit threes against Wyoming this season.

Rusk opened the game’s scoring with a spin move in the lane to drive to her left for a layup, before she hit a transition three as Wyoming started the game on a 5-0 run. An Erjavec layup was the difference as Wyoming held a slim 9-8 lead with 4:11 left in the opening quarter. But out of the timeout, the Cowgirls went could, missing seven of their last eight shots, and the Broncos took a 15-12 lead into the second frame.

Senior Sladjana Rakovic ended a long scoring drought for the Cowgirls with a driving layup to open the second quarter, and Wyoming went on a 7-0 run capped by a Gomez three ball. The Cowgirls called timeout after Gomez hit another three to put Wyoming up 22-17 at the 5:53 mark. Another Gomez three pushed the lead to 29-22, but the Broncos answered with back-to-back threes and the Cowgirls held a 29-28 halftime lead.

The Cowgirls scored instantly to start the second half, as Gomez darted to the elbow and Erjavec found her for the jumper. But a Lupfer jumper tied the game at 33 with 6:30 left in the quarter, and the Broncos scored on the fast break to retake the lead, 35-33. At the media timeout with 4:34 left in the quarter, the Cowgirls trailed 35-34 following a Cotton free throw. Erjavec scored a reverse to end a Bronco 11-1 run, and after Gomez scored, the Cowgirls were within three, trailing 41-38. The Broncos missed a shot at the buzzer, but held a 49-43 lead after three quarters.

Tapia scored on a similar reverse as Erjavec to start the fourth quarter, but the Broncos immediately answered. Lupfer hit a three from the right wing, and the Cowgirls called timeout, trailing 58-53 with 5:44 left in the game. Later, Weidemann and Erjavec went on a mini 5-0 run, to get within two, but BSU hit a timely three to keep a two-possession cushion at the 3:15 mark. In fact, the Broncos used a 7-0 run to get their biggest lead of the game up to that point, 67-58 with 2:41 remaining in the game. Cotton split a pair of free throws, and the Cowgirls trailed 70-62 with a minute left, and the game ended 72-64 for BSU.

The Cowgirls return to the hardwood on Saturday, Jan. 5, when they host UNLV at 2 p.m. in the Arena-Auditorium.