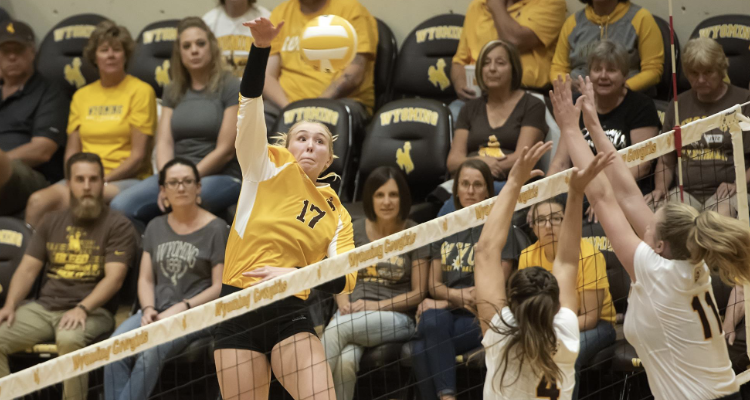 The Cowgirls (16-9, 8-5 MW) did what no Mountain West team has done since Oct. 24, 2017, and took a set from the Rams at Moby Arena. After a falling down, 2-0, to start the match, the Pokes dominated the third and led late in the fourth, but a late Colorado State run put the match out of reach.

The Wyoming offense was led by Halie McArdle, who racked up 14 kills on the night to set a new season high while also compiling seven digs. Setter Cori Aafedt added 20 assists, while freshman KC McMahon recorded a career high four service aces. In fact, as a team Wyoming combined to drop in 10 service aces—shattering the previous single-match high of six.

Defensively, Jackie McBride led the Cowgirls with seven of the team’s nine blocks along with seven kills and a pair of aces. Libero Madi Fields added 17 digs to surpass 400 on the season and move into eighth on the program single-season digs list.

The Cowgirls opened with an 8-5 lead in the first, but an 11-0 run for the Rams seized control of the set. Even with a 6-0 Wyoming run late to pull within three at 23-20, Colorado State was able to quell any hopes of a comeback as the Rams scored a couple unanswered points to take the first, 25-20.

After Wyoming was unable to overcome a 6-1 deficit early on in the second set on the way to a 25-19 Colorado State win, the Cowgirls answered back in the third. The Brown and Gold never trailed and dominated the Rams for a 25-16 set victory to take back some momentum in the match. Wyoming had no attacking errors in the third, recording a match-high .545 hitting percentage in the frame.

The Cowgirls will be back in action on Saturday at 1 p.m. when they travel to Colorado Springs, Colo., for a battle with Air Force.