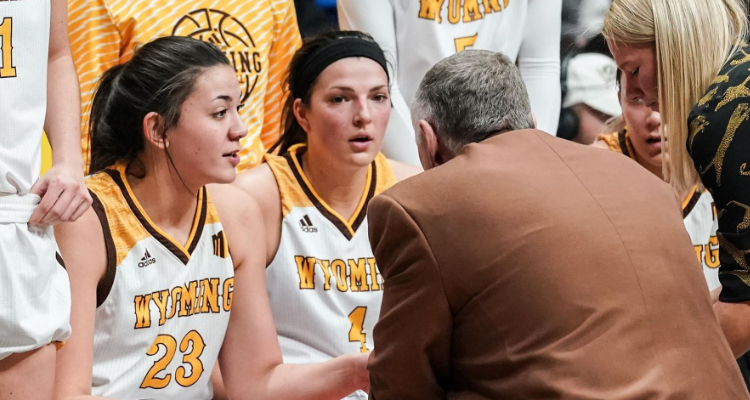 BROOKINGS, S.D. – The Cowgirls struggled offensively in the second half, scoring just 15 points in the final 20 minutes, and Wyoming (2-3) lost the first of a two-game road trip to South Dakota State, 40-67.

“We had good looks again, but we’re just not scoring the basketball. We can harp all we want on playing defense, but if we don’t score any points, then we have to find a way off good looks because it puts no pressure on the other team,” said head coach Gerald Mattinson. “You can only defend so many times, and then pretty soon it chips away, and the next thing you know, you’re down 10 or you’re down 12. Your team gets a little frustrated, and probably so do we as a staff, but we have to find a way to score.”

The Cowgirls had six assists to 10 turnovers, and Wyoming allowed 17 points off those turnovers.

Wyoming ended the first half shooting 50 percent from the field. However, they went long stretches in the second half without a made field goal, and the young squad dropped to 0-2 on the road this season.

The Jackrabbits scored first with a layup after an offensive rebound, but Vitulova scored a hook shot in the paint to kickstart at 6-0 run for Wyoming. South Dakota State went on a 7-0 run before freshman McKinley Bradshaw scored a layup. SDSU score four more before a Rusk three made it 11-13 for the home team. However, the Jackrabbits ended the quarter on a 7-2 run and took a 20-13 lead into the second quarter.

The Jackrabbits started the quarter on a 5-0 run to force a Wyoming timeout with 7:56 to go in the half and the Cowgirls trailing 25-13. After another SDSU basket, the Cowgirls used a 10-0 run capped by a Rusk three-pointer to cut South Dakota State’s lead to single digits, 27-23. The Cowgirls were outscored down the stretch of the half, 7-2, and the Jackrabbits took a 34-25 lead into the locker rooms at halftime.

South Dakota State struck first in the second half with a pair of free throws. Rusk got the Cowgirls on the board with a layup from an offensive rebound. SDSU extended its lead to 40-27 after a baseline drive before the media timeout with 4:10 to play in the quarter. Redshirt junior Selale Kepenc ended a three-minute Cowgirl scoring drought with a three pointer, but the Jacks used a 6-0 run to take a 46-30 lead after three quarters of action.

The Jackrabbits started the quarter with six straight points before Vaifanua scored a layup for the Cowgirls, but SDSU held a 54-32 lead. Freshman Paige Powell three pointer made it 62-39 with 2:55 to go, and the Jackrabbits called a timeout. Vaifanua added a free throw and Wyoming dropped the road game, 67-40.

The Jackrabbits were led by Myah Selland’s 16 points and three rebounds, while Kallie Theisen had nine points and four rebounds.

The Cowgirls return to action on Monday, Nov. 25, when they face North Dakota State on the road at 6 p.m. (MT).