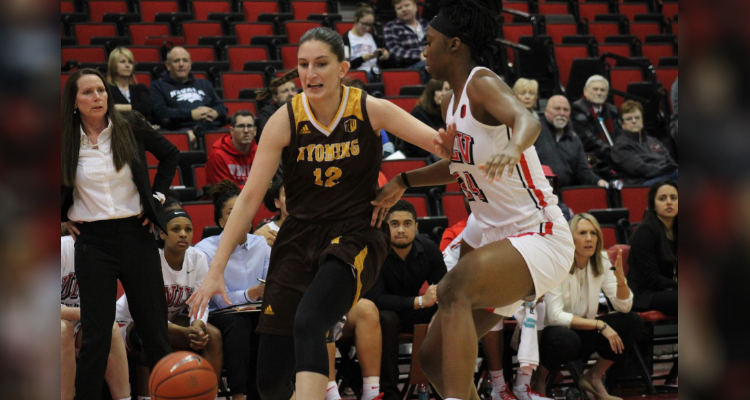 LAS VEGAS, NV. – Behind another 20-point performance from Marta Gomez, the Cowgirls (17-5, 10-3 MW) shot past the UNLV Lady Rebels (9-16, 7-7 MW) for their eighth-straight Mountain West win. This eight-game winning streak is a new program best in Mountain West play.

“They know their assignments, they do what we ask and we don’t have a breakdown anywhere down the line,” head coach Joe Legerksi said of the defensive effort. “There’s players that are figuring out how to help and do more than one thing. You do have to guard the ball. You have to help, then you have to get back to your player when she gets the ball.”

Bailee Cotton had 12 points and three rebounds while taking her team-leading 15th charge of the season on the defensive end. Karla Erjavec added nine points, four rebounds and a pair of assists, while Taylor Rusk score nine points on just six shots.

The Lady Rebels opened the scoring, but Gomez answered right away with two of her nine first-quarter points. Those two points tied Gomez with former Mountain West Player of the Year Liv Roberts at No. 17 on Wyoming’s all-time scoring list. She would pass her before the end of the quarter. Cotton scored a layup to bring the Cowgirls within one, 7-8, at the 5:09 mark. Gomez added a jumper to tie the game at 11 all with 2:14 to play in the opening frame, and after the teams traded baskets, it was tied at 13 after one quarter.

UNLV attacked the offensive glass early in the second quarter to start the period’s scoring, but Gomez scored a three from the far corner to put Wyoming up 16-15. Rusk scored a three on Wyoming’s next possession following a Sladjana Rakovic offensive rebound. Rakovic then scored an elbow jump to preserve Wyoming’s four-point lead, 21-17 at the 4:47 media timeout. After a UNLV and-one play, Rakovic scored four straight, and the Cowgirls took a 27-20 lead with 1:09 remaining in the half. A Quinn Weidemann three pushed the run to 9-0, and the Cowgirls took a 30-21 lead into the halftime break.

Cotton scored a pair of free throws to start the second half and give the Cowgirls an 11-point lead, 32-21. After a UNLV free throw, an 11-0 run by the Cowgirls, four of which were scored by Erjavec and six by Gomez, gave the Cowgirls a 45-24 lead with 4:25 left in the quarter. During the run, UNLV went over three minutes without a basket and had three turnovers. The Lady Rebels finally scored a three, but Gomez converted a running bank shot to reach 20 points on the night. After a lengthy delay for a review, Gomez scored three points the old-fashioned way, and the Cowgirls had a 53-29 lead at the end of the quarter.

The teams traded quick layups to start the final quarter, but the Lady Rebels went on a 6-0 run after the opening points. That run was squashed by a Rusk three from straight away, and the Cowgirls held a 58-37 lead with 5:09 to play. Cotton added a pair of free throws with 2:03 remaining in the game to put the Cowgirls up 62-44, but a Lady Rebels scored a three on the next possession. Another Lady Rebel layup made the score 64-49, and the Cowgirls dribbled out the clock.

The Cowgirls return to action on Saturday, Feb. 23, when they host Colorado State in the second game of this year’s “Border War” series. That game is scheduled to tip at 2 p.m. inside the Arena-Auditorium. It is also Wyoming’s “Bounce Cancer” game, and fans can purchase shirts for $15 the day of the game.