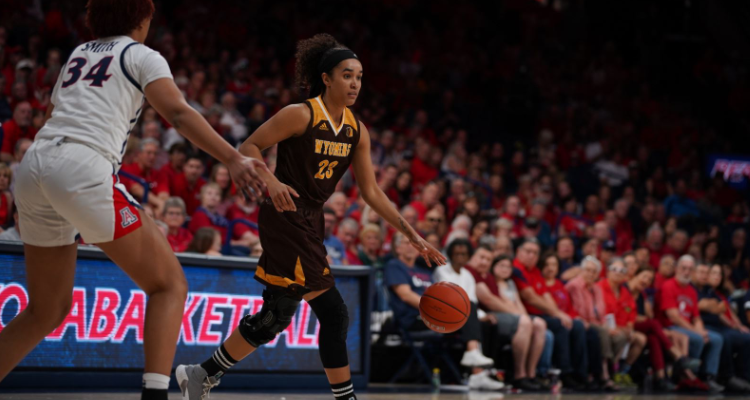 TUCSON, AZ.  – The Cowgirls had their WNIT run ended in the quarterfinals by Arizona, 67-45. Wyoming struggled from the field, and didn’t hit its first three until the fourth quarter. The Cowgirls end their season with a 25-9 record, and this 2018-19 edition of the Cowgirls became just the second team to make it to the WNIT quarterfinals.

“It’s always difficult to end the season,” said head coach Joe Legerski. “Sometimes you have to reflect on what happened throughout the year. I know there’s a number of disappointed players in that locker room. The biggest thing they have to remember is the journey we all went on to go 25-9. This team ends up with the second most wins in the 45 years of Cowgirl basketball.”

The Cowgirls were led by senior Sladjana Rakovic, who paced Wyoming with 12 points and seven rebounds. It is the sixth time this season and the ninth time in her career she has reached double-figure scoring.

Senior Bailee Cotton added 10 points and six rebounds, as she reached double-digit scoring for the 23rd time this season. She also had two blocks and a steal, while junior Taylor Rusk added a team-best two assists to go along with four points. Freshman Karla Erjavec scored five points and had an assist.

Arizona was led by a game-high 25 points from Aari McDonald, who also had six rebounds and four assists. Cate Reese joined her in double digit scoring with 13 points and a game-high nine rebounds.

The Wildcats struck first with a straight away three, and raced out to an 11-0 lead to force a Wyoming timeout with 6:32 to play in the first quarter. Erjavec ended the run with a pull up jumper from the elbow at the 5:50 mark. Erjavec scored a pair of free throws to bring the lead down to single digits, 17-8, with 2:10 to play in the opening frame, and the teams traded baskets to finish the quarter with Arizona leading 19-10.

Rakovic checked in and scored a layup to start the second quarter, but the Wildcats answered with a layup on the other end to ignite a 7-0 run and extend their lead to 26-12. The Cowgirls called time with 4:38 to go in the half. Rakovic ended a 5:19 Cowgirl scoring drought with a free throw, but Wyoming still trailed by double-digits, 26-13 with 3:51 to play in the half. The Cowgirls scored the only points in the final minutes of the half and trailed, 26-15, after the first 20 minutes.

Arizona started the fourth quarter with a three from the corner, and Rakovic scored on the block on Wyoming’s next possession. However, back-to-back threes gave Arizona it’s 20-point lead back, 51-31 with 6:49 to play. Freshman Tereza Vitulova checked in and scored a three, but Arizona responded with an and-one play to keep their 22-point lead, 59-37.

The Cowgirls finished the season with 25 wins, tied for the second most in program history, and played in the program’s first-ever Mountain West Championship game. Wyoming had 20-plus wins for the third season in a row, and tied the program record with 13 conference wins. Cotton, Gomez and Erjavec were honored by the Mountain West with individual honors following the regular season.