Cowgirls Give No. 17 Gonzaga All They Can Handle in 54-65 Contest 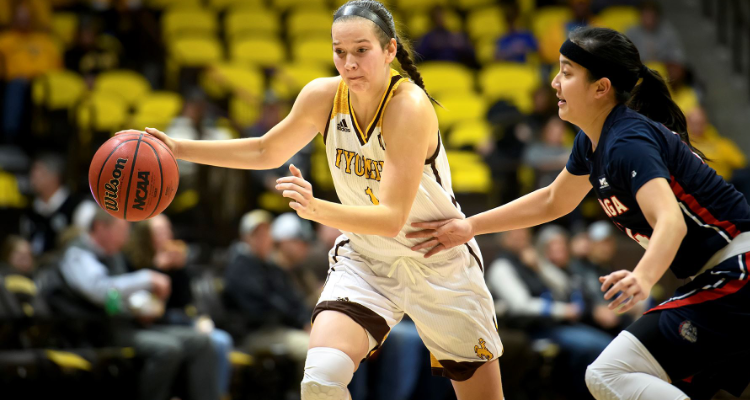 Cowgirls Give No. 17 Gonzaga All They Can Handle in 54-65 Contest

LARAMIE, Wyo.   –  The Wyoming Cowgirls stepped up against the No. 17-ranked Gonzaga Bulldogs in the Arena-Auditorium, keeping the game in single digits in the fourth quarter, but Gonzaga (10-1) made late free throws and held off Wyoming’s (6-5) comeback attempt and took a 54-65 win over UW.

“I’m pleased with our effort,” said head coach Gerald Mattinson. “We have a small forward in Alba (Sanchez Ramos) playing her heart out against two all-West Coast Conference post players, and it doesn’t get any easier with the kids that come in for them. I thought we battled, I thought we scrapped and I thought we did everything we could do. Obviously we needed to make more baskets at key times, but they weathered the storm, too. You have to give credit to Gonzaga. They’re well-coached, they’re talented and they execute.”

The Cowgirls were led by sophomore Tereza Vitulova’s team-high 14 points and six rebounds. Vitulova added a steal and was a perfect 6-of-6 from the free throw line. Vitulova has now scored in double-figures in six straight games, nine times this season and 14 times in her career.

Sophomore Quinn Weidemann had 10 points – all in the first half –  and added a rebound, a block and an assist. Weidemann has now reached double-digit scoring for the fifth time this season and 12th time in her career.

Gonzaga was led by a trio of double-digit scorers. LeeAnne Wirth had 18 points and nine rebounds, Jessie Loera scored 16 points and added five assists and Katie Campbell scored 10 points and had a pair of assists.

The squads traded baseline jumpers, and a Gonzaga three made it 11-9 with 3:06 to go in the first. After trading layups, GU scored another long two to tie the game, 13-13. Weidemann scored a three from the far corner, but the Zags scored a long two to make it 16-15 for Wyoming after one quarter.

Gonzaga took its first lead of the game from a long two point shot to start the second quarter, but Vaifanua drained a three to take the lead back, 19-17. Gonzaga converted an old-fashioned three-point play to go up by one, and scored a layup on the next possession.

Weidemann scored a three from the wing to tie it up at 22 with 3:50 to go in the half. The squads traded baskets, and with the game tied at 24, Gonzaga converted an and-one play and then a layup at the buzzer to take a 29-24 lead at the half.

Vitulova scored on the block to start the second half, but the Bulldogs answered with a layup of their own on the other end and added a pair of free throws on the next possession to go up 33-26 with 8:05 to play in the quarter. The Cowgirls used a quick 5-2 mini run to get back within four, but a quick pair of Bulldog layups made it 39-31 with 4:42 to play in the third quarter.

Vaifanua ended a nearly four-minute Cowgirl scoring drought with a free throw, but the Bulldogs scored another long two and added two free throws to take an 11-point lead, 43-32, with 2:15 to go in the third frame. After a Bulldog fastbreak score, Freshman McKinley Bradshaw turned an offensive rebound into a layup to make it 45-34 after three quarters.

Gonzaga scored a corner three to start the fourth quarter, and Vitulova scored in the paint for Wyoming to make it 48-36. Vitulova scored free throws, but GU made a three from the near wing and added a fastbreak layup to extend its lead to 55-38, forcing a Cowgirl timeout with 7:12 to play.

Rusk scored out of the break, and a Sanchez Ramos three and a pair of Vitulova free throws made it 55-45 with five minutes to go, forcing a Bulldog timeout with Wyoming on a 7-0 run. Bradshaw sank a pair of free throws to cut Gonzaga’s lead to single digits, 55-47, however GU scored two free throws to push the lead back to 10. After a Bradshaw free throw, the squads traded points, and Wyoming trailed, 59-50, with 2:41 to play. Sophomore Karla Erjavec scored a driving layup, making it 59-52 with 1:29 to play, and Gonzaga called a timeout.

The Cowgirls started fouling with 49 seconds to play to extend the game, and the Bulldogs made their shots. Sanchez Ramos scored a layup to keep pace, but GU made their next two free throws and earned a defensive stop. Two more free throws made it 65-54, and Gonzaga dribbled out the clock.

The Cowgirls return to the hardwood on Wednesday, Jan. 1, when they host Boise State at 6:30 p.m. in the Arena-Auditorium.