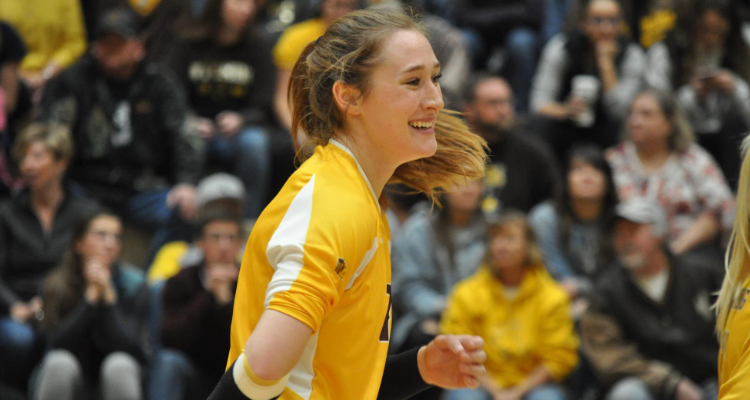 LARAMIE, WY. – The Wyoming volleyball team earned its 10th home win in as many matches on Thursday night at the UniWyo Sports Complex, sweeping Utah State, 3-0.

“I thought we did some good things tonight,” head coach Chad Callihan said. “I particularly liked our defense. I think we picked up quite a few balls and did a pretty good job of establishing a block, and had several balls off the hands that just redirected and I thought we did a nice job with that. The offense showed good things at times I think we just need to be consistent night in and night out. We’ve got to be able to connect with our middles. If we can be a little more consistent I think they can be a force for us.”

The Cowgirls (13-6, 5-2 Pac-12) posted their highest hitting percentage since MW play began last month with a .386 mark, while holding the Aggies to a .049 percentage. Nearly doubling up Utah State in kills, 49-25, Wyoming was led offensively by junior Tara Traphagan who recorded 13 kills on a stifling .684 hitting percentage. Senior Emily Lewis was also in double-digit kills with 10. Setters Marissa Hines and Cori Aafedt both reached 20 assists, as Hines led with a career-high 23 and Aafedt added 20. With her first assist of the night, Aafedt reached 1,000 assists for her career and ended the night with 1,019.

“Our depth is one thing we have that most teams don’t,” Traphagan said. “We can score in all three positions with all different players. We’re so full of offensive assets, and not all teams have that. When everyone’s on it’s hard to stop us.”

Defensively, Wyoming combined to record nine blocks as a team with senior Reed Copeland posting six to lead the team, followed by Traphagan, Jackie McBride and Faith Waitsman who each recorded three. Junior libero Madi Fields led the team in digs with 13 of the squad’s 46.

Wyoming opened the match by taking the first set, 25-15, over the Aggies. The teams went back and forth to open the frame and found themselves tied at six early, but the Cowgirls turned it on and used a 7-0 run to jumpstart themselves and take the lead for good. From that point, the Pokes outscored the Aggies, 19-9, over the remainder of the set. Copeland led the way for Wyoming in the period, recording four kills and three blocks.

The Cowgirls started the second set on a 5-0 run and never looked back, going on to take the second, 25-12. Traphagan, Waitsman and Halie McArdle each added four kills in the frame to pace the Wyoming offense while McBride added three blocks.

Utah State wouldn’t take its first lead in the match until the third set, jumping out to an 8-5 lead to start; however, the Cowgirls were able to bounce back and eventually tied the set up at 15-all. From that point, Wyoming went on a 10-4 run—capped off by a kill from McArdle—to take the set, 25-19, and clinch the match.

The Cowgirls will be back in action this Saturday at 1 p.m. when they host Boise State at the UniWyo Sports Complex to wrap up their four-match MW homestand.