Cowgirls Hold Off Jaguars and Advance to the WNIT Sweet Sixteen 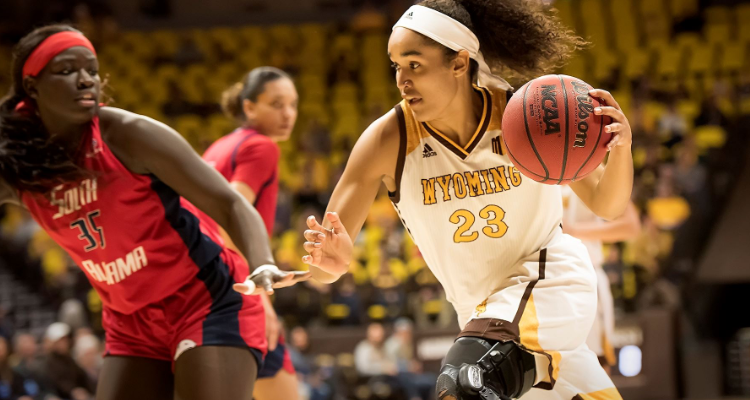 Cowgirls Hold Off Jaguars and Advance to the WNIT Sweet Sixteen

“I’m excited for this team,” said head coach Joe Legerski. “To still be playing at this point of the season, every opponent is talented and used to winning. This is a team with 25 wins in South Alabama. They overcame a 13-point deficit in their previous game, so I knew it was going to take all 40 minutes tonight.”

The Jaguars held a 35-33 lead at halftime, and today was the first win for the Cowgirls this season when trailing at the half, having lost each of their last six tries. The third quarter was the key, as Wyoming outscored South Alabama 22-13 in the pivotal frame.

The Cowgirls were led by senior Marta Gomez’s 22 points, the 11th time this season the Valles, Spain, native has eclipsed 20 points in a game. She was also a factor on the defensive end with six rebounds, a career-high-tying two blocks and two steals.

Freshman Karla Erjavec carried the load offensively in the first half, scoring 12 of her career-high 19 points in the first 20 minutes. She added three rebounds and a pair of assists. Her first assist of the game set a new Cowgirl record for assists by a freshman in a season with 119. She ended the game at 120 on the year.

“I thought Karla Erjavec played well for 40 minutes,” Legerski said. “She had the most difficult assignment defensively, and she comes up with 19 points for us offensively. I thought none were bigger than her driving down the lane, getting the basket and getting the and-one with it. She stayed focused the entire game.”

Senior Bailee Cotton nearly had a double-double with 16 points and nine rebounds. She also had a steal, the 12th game in a row for Cotton with at least one steal. Junior Taylor Rusk and senior Clara Tapia were efficient in directing the offense, as the duo combined for eight assists and zero turnovers. Freshman Quinn Weidemann scored eight points, including an important three-pointer in the fourth quarter, to go along with her three assists and a steal.

Erjavec kicked off the game with a three from the right wing, and a free throw put South Alabama on the board. Cotton scored six points in a row for the Cowgirls, and UW held a 9-5 lead at the 6:10 mark of the first quarter. After a defensive stop, Erjavec scored in transition and forced a Jaguar timeout as USA trailed 11-5 with 5:35 to play in the opening frame. The teams matched each other point-for-point, and a Weidemann three made it 18-12 before the Jaguars scored at the buzzer, making it 18-14.

Gomez scored in the post to start the second quarter, but the Jaguars rattled off 11 straight points to take a 25-20 lead at the 8:34 mark. Senior Rachelle Tucker ended the run with a free throw, and after a Cowgirl layup, the Jaguars made a pair of threes, pushing their lead to 31-23 with 4:24 to play in the first half. A three by senior Sladjana Rakovic made it a four-point game, 32-28 at the 3:09 mark. Erjavec drove the lane for the final points of the half, and Wyoming trailed, 35-33, after 20 minutes of play.

Gomez opened the second half with at three right in front of the Cowgirl bench to retake the lead, 36-35, but the Jaguars answered with a three of their own. A Rusk layup preserved Wyoming’s lead, 41-40, and a Gomez driving floater made it 43-42 in a back-and-forth early third quarter. Out of the media timeout, Erjavec converted an old-fashioned three-point play to push the Cowgirls’ lead to 48-42. Erjavec added a pair of free throws to end the third quarter where the Cowgirls outscored USA 22-13 to take a 55-48 lead into the final 10 minutes.

The Jaguars scored the first six points of the quarter, but Gomez ended their run with a long two, making it 57-54 at the 5:33 mark. Cotton added a layup before Gomez scored from the baseline to force a South Alabama timeout with UW leading 61-54 with 3:50 to play. Gomez capped Wyoming’s 9-0 run with an and-one play before the Jaguars scored a layup at the 3:14 mark.

The Jaguars cut the lead to five points after a long jumper made it 66-61 with 1:50 to play, but Cotton found Gomez under the basket for an easy layup. With 44 seconds to play, Weidemann drained a three, putting the Cowgirls up 71-63. On the next possession, Rusk grabbed a steal and added a free throw. The Jaguars then banked in a three and fouled Gomez, who made both her shots.

South Alabama scored a quick layup with 22 seconds to play, but Gomez again made both her free throws after being fouled. Shaforia Kines made another three for South Alabama, and then Weidemann stepped up to the free throw line and made both, ending the game with a 78-71 Cowgirl win.

South Alabama was led by Kines with 15 points and two assists, while Savannah Jones and Antoinette Lewis each scored 14 points with Lewis grabbing a game-high 10 rebounds.

The Cowgirls will face Pepperdine in the third round of the WNIT. That game will be on Thursday, March 28, at 6:30 p.m. (MT) in the Arena-Auditorium here in Laramie.