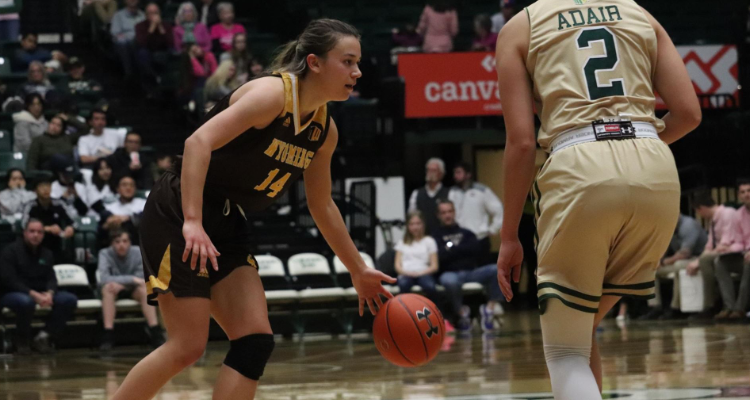 FORT COLLINS, Colo. – The Wyoming Cowgirls stifled Colorado State’s offense, holding the Rams to a season-low points, as Wyoming (12-11, 8-6 MW) won their third straight road game in the “Border War” series. Colorado State (11-14, 5-9 MW) made a late push, but the Cowgirls held on for the rivalry win.

“I’m really pleased not only that we won the game, but how we won the game and the type of game it was because it was very physical, very aggressive, and we didn’t back down,” said head coach Gerald Mattinson. “That’s growth, that’s a step going forward. We wanted to get more aggressive with the ball in the fourth quarter, put the ball on the floor a little more, kind of putting the game in the hands of the officials to make calls. We started shooting free throws early. We got nine free throws in the second half and held them to six-for-six, that’s our three points right there.”

Sophomore Quinn Weidemann scored a game-high 13 points, including 10 points in the fourth quarter as the Omaha, Neb., native was sent to the line multiple times late in the game. It’s the 10th time this season and the 17th time in her career she has reached double-figure scoring. Weidemann also converted a career-high eight free throws, all of which came in the fourth quarter. Weidemann added an assist and six rebounds.

Sophomore Tommi Olson scored a career-high 10 points on the strength of a career-high two made three-pointers. Those were the first two makes from behind the arc in her career. It’s the first time she’s reached double figures in her career, as well. Olson also had nine rebounds and two assists for the Cowgirls.

Sophomore Alba Sanchez Ramos grabbed a career- and game-high 11 rebounds while scoring a pair of points and dishing out an assist. Sophomore Tereza Vitulova scored seven points with three rebounds and an assist, while senior Taylor Rusk had five points, seven rebounds, two assists and the lone Cowgirl steal during the day.

The Rams scored first with a fadeaway jumper in the paint, and Sanchez Ramos answered with a jumper of her own to start a 9-0 run for the Cowgirls capped by a Rusk driving layup at the shot clock buzzer. The Rams went the final 9:00 of the quarter without a point, and the Cowgirls took a 9-2 lead after one period.

Olson scored the first three of her career to start the second quarter, then followed it up with a backdoor layup to make it 14-2 for the Cowgirls, forcing a CSU timeout with 8:40 to go in the first half. A pair of CSU free throws ended a nearly 12-minute scoring drought for the Rams and ended UW’s 14-0 run.

After a Vitulova layup, the Rams scored seven straight to make it 16-11 for Wyoming with 2:33 to go in the half. Bradshaw ended a 3:44 Cowgirl scoreless stretch with a driving layup. The Rams scored the last points of the half, and Wyoming held an 18-13 lead at the break.

Weidemann converted a straightaway three to start the third quarter, but the Rams answered with a 6-0 run to make it 21-19 for Wyoming. After a Rusk three, the Rams used a 7-0 run to take the lead, 28-26, but junior Jaye Johnson banked in a three at the buzzer to give UW a 29-28 lead after three quarters.

Olson hit another three to start the fourth quarter, giving UW a 32-28 lead. A pair of free throws for CSU cut the Cowgirl lead to just two. Weidemann scored three free throws to put UW up 35-30 with just 3:19 to go in the contest.

With just 1:25 to go in the game, Weidemann drove and scored an old-fashioned three-point play to make it 38-30 for the Cowgirls. The Rams ended a 4:17 scoring drought with a wild layup, and then added a three with just 30 seconds to play to make it 38-35. After Weidemann scored a pair of threes, the Rams added another three. Weidemann was again sent to the line, and again made both shots to put UW up 42-38 with 21.6 seconds to play. After a CSU layup, Johnson was sent to the line and made one of two. The Rams missed a desperation shot at the buzzer, and the Cowgirls held on for a 43-40 win.

The Cowgirls will return to the hardwood on Wednesday, Feb. 19, when they host Utah State at 6:30 p.m. in the Arena-Auditorium.