Cowgirls Lose Back and Forth Affair Against Pacific, 70-64 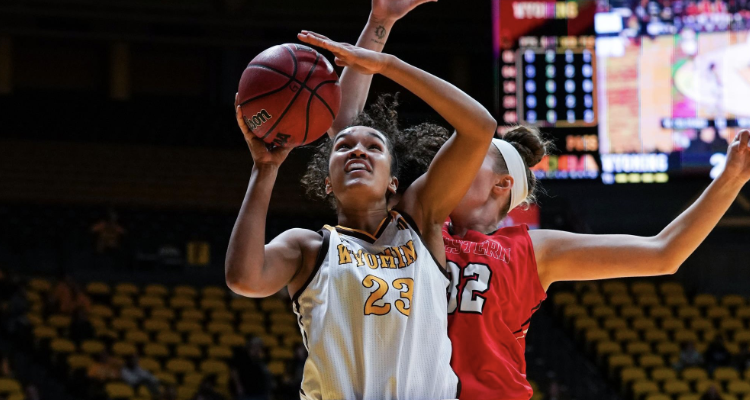 Cowgirls Lose Back and Forth Affair Against Pacific, 70-64

STOCKTON, CA. – A career-high-tying 19 points from senior Bailee Cotton wasn’t enough for the Cowgirls, as Wyoming (3-2) lost a 70-64 decision on the road to Pacific (3-1). The game featured five ties and 12 lead changes.

“I thought Bailee Cotton had a monster of a game tonight,” head coach Joe Legerski said. “She had 19 points, really kept us in the game and really willed it to us. We’re right there with two minutes to go. We had our shot and it didn’t go down. They had their shot and it did. It says a lot about this team because we could have given in when we were down 54-48, but we just battled back and kept staying in it.”

The Cowgirls were doomed by turnovers, as their 19 turnovers led to 15 points for Pacific. Wyoming’s bench outscored Pacific’s 14-7. Cotton tied her career high with 19 points, while senior Marta Gomez add 17 points. Senior Rachelle Tucker scored eight off the bench, and senior Clara Tapia and freshman Quinn Weidemann each chipped in six points.

“What we talked about is, we had 15 turnovers in the first half,” Legerski said. “We did not handle the pressure real well. Pacific creates some issues for you. They’re very quick on the guard line, and they can switch you at times, and we just weren’t aggressive enough. We didn’t feel comfortable enough at times.

On the glass, Cotton was just shy of a double-double, as she had a game high nine rebounds, while junior Taylor Rusk added seven. Tapia had four assists as she directed the offense. Four Cowgirls each recorded a steal during the game

“What I always tell the team is, did we make the right plays?” said Legerski. “We’re down three, Clara (Tapia) drives, makes the right play with about four seconds left (on the shot clock) and does a drive and kick, and we miss the shot. Give Pacific credit, five seconds left on one of their shot clocks, and they come up with a big three.”

Gomez came out firing, scoring Wyoming’s first six points with a pair of three-point shots from the same spot on the right wing. Both teams suffered scoring droughts after that, but Pacific scored a fast break layup to cut Wyoming’s lead to 6-4 heading into the first media timeout. Gomez ended an eight-minute Cowgirl scoring drought with another three pointer, and the quarter ended with Pacific holding a 10-9 lead. The Cowgirls had eight uncharacteristic turnovers in the first frame, but they led to zero Pacific points, as both teams were cold from the field.

Tucker put the Cowgirls ahead with back-to-back post moves to start the second frame, and after another score from Tucker, Wyoming held a 15-12 lead. Tucker scored again in the post, and Weidemann converted a jumper in the paint to put Wyoming up 19-17. Rusk nailed a pull-up jumper from the top of the key to push the lead to 21-17.

The teams traded baskets to open the second half, and then a Pacific three-pointer tied the game at 26. Cotton converted an old-fashioned three-point play to put Wyoming on top again. But Pacific scored a pair of free throws and a jumper in the paint, and Wyoming called a timeout, trailing 30-29 with 6:30 left in the third quarter.

The Cowgirls executed out of the timeout, as Cotton scored a layup and earned a steal that turned into a Gomez three-pointer in transition. Cotton converted three-point plays for Wyoming two possessions in a row, but Pacific kept pace, and Wyoming held a 40-38 lead with 3:29 left in the quarter. Gomez hit another three-pointer, but an 8-0 run by Pacific forced a Cowgirl timeout, trailing 46-43 with 1:28 remaining in the quarter. A high-scoring quarter ended as Pacific’s Ameela Li scored a late layup to put the Tigers up 52-46. The Cowgirls were outscored 31-21 in the quarter.

Cotton converted a pair of free throws to open Wyoming’s scoring in the fourth frame, and a layup by Erjavec brought Wyoming to within four, 54-50. After Cotton took a charge, Tapia scored a layup to tie the game, 54-54. Later, a pair of Tapia free throws ended a 2:10 scoring drought for the Cowgirls. The teams traded baskets until a Pacific fast-break layup gave the Tigers a 61-58 lead. Then, Li hit a three-pointer out of a timeout to put the hosts up 64-58 with 34 seconds left.

Gomez made a jumper in the paint, and the Cowgirls started fouling Pacific. Li made her two shots from the charity stripe, and Wyoming called a timeout with 28 seconds left, trailing 66-60. Freshman Karla Erjavec scored a layup, and the Cowgirls sent Li back to the free throw line where she converted both chances. Li fouled Cotton, and Cotton scored two free throws to tie her career-high with 19 points. After Li split a trap in the back court, Cotton fouled her, and again, Li converted both her free throws and the game ended 70-64 for the Tigers.

The Cowgirls return to action on Tuesday, Nov. 27, when they host Montana State at 6:30 p.m. in the Arena-Auditorium.