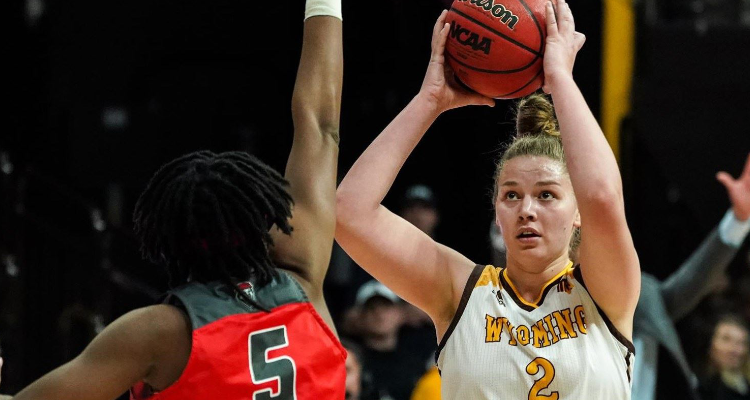 LARAMIE, Wyo. – The Wyoming Cowgirls battled back from an eight-point deficit to take a fourth-quarter lead, but they were pushed to overtime by the New Mexico Lobos (13-12, 4-8 MW), where UNM took a 74-71 win over Wyoming (11-11, 7-6 MW). After winning three-straight, the Cowgirls have now lost two in a row.

“We played hard,” said head coach Gerald Mattinson. “What’s happening now is, or what happened in this game and maybe the last game at Boise, for whatever reason, what we’ve been doing well all year, which is executing the defensive scout, for the last two games, we have missed that. We scored enough points tonight. We scored in bunches, they scored in bunches, but we didn’t execute what we needed to defensively. Maybe by the time the tournament rolls around, we’ll get both of them together.”

Wyoming was led by sophomore Tereza Vitulova, who scored 20 points on 9-of-10 shooting. She also had five rebounds, a career-high-tying two blocks and a steal. It is the sixth time this season Vitulova has scored at least 20 points, and the 17th time she has reached double-figure scoring.

Senior Taylor Rusk scored 15 points for UW while pulling down six rebounds. She was just one point off her season high of 16 that was set against San Diego State on Jan. 22. Rusk added an assist in 38 minutes of action.

Freshman Jaeden Vaifanua scored 11 points and pulled down four rebounds for Wyoming off the bench. She collected a career-high four steals, recording multiple steals for the first time in her young career. Vaifanua has now reached double-figure scoring in seven games this season, including the last three in a row.

Sanchez Ramos started the game immediately with a corner three before a Vitulova layup made it 5-0 early. The Lobos tied it up with five straight points. Vitulova ended a 6-0 Lobo run with a three, but UNM responded with a three of their own to make it 14-10 for the visitors with 4:40 to play in the opening quarter. Vaifanua ended a three-minute Cowgirl scoring draught with a jumper and a layup to tie it at 14 and force a Lobo timeout. Vaifanua scored three after a Lobo layup, and the Cowgirls took a 17-16 lead after one period.

Bradshaw drove for a layup to start the second quarter, but the Lobos scored five straight to go up by two. The teams battled to a 25-25 tie with 6:03 to go in the first half before a Rusk corner three forced a Lobo timeout. After the stoppage, the Lobos scored six of the next eight points and went up by one point, 31-30. Rusk scored a pull-up jumper at the buzzer to give UW a 32-31 halftime lead.

Vitulova scored a long jumper to start the second half, but the Lobos answered with four straight to regain the lead, 35-34. After trading baskets, the Lobos scored six straight to force a Cowgirl timeout with UW trailing 43-38. Out of the break, Weidemann scored a three, but the Lobos scored a layup to answer. Vaifanua ended a 6-0 lobo run with a layup, but UNM held a 49-43 lead. The Cowgirls used an 8-0 run, capped by a pair of Rusk free throws, to take a lead, 53-51 after three quarters.

The teams struggled offensively to start overtime, and with 2:11 to play, the Lobos scored a transition layup. Sanchez Ramos scored a long three to give UW the lead. However, UNM scored a three to answer. With 41.6 seconds to go, Vitulova scored a free throw to bring the Cowgirls within one, but UNM scored a layup and held on for a 74-71 win.

The Cowgirls return to action on Saturday, Feb. 15, when they travel to Fort Collins for the final edition of this year’s “Border War”.