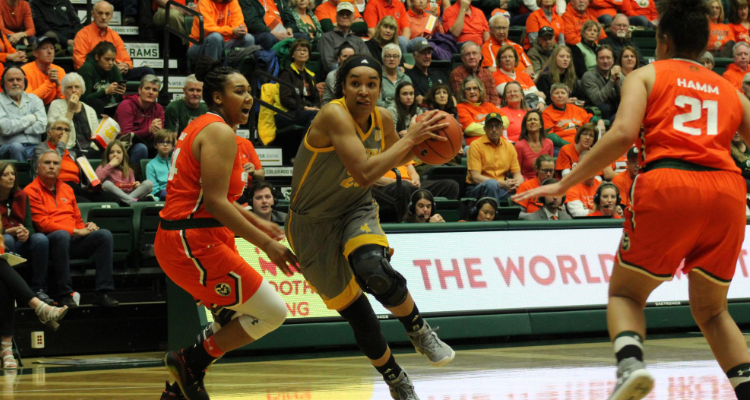 “They’re getting the message, and the message is you have to compete every night, you need to play to your potential and it’s very difficult to win on the road,” said head coach Joe Legerski. “This is a big win for us.”

The Cowgirls were led by senior Marta Gomez, who scored 20 points – her sixth 20-point game this season – and converted four three-pointers. Senior Bailee Cotton joined her in double figures with 12 points while collecting seven rebounds to tie for the team lead with junior Taylor Rusk.

Freshman Karla Erjavec scored nine points while dishing out a game-high six assists to go with four rebounds. Five different Cowgirls recorded a steal, and Wyoming outrebounded the Rams, 29-24. It’s the 11th time in the last 12 games the Cowgirls have outrebounded their opponent.

“It was just the Border War,” Legerski said. “You knew you weren’t going to run away from them. They kept coming back, and they got it down to about eight or nine. There were some big shots down the stretch. Tereza (Vitulova) hit a big three for us, and I thought Clara (Tapia)’s jumper off the baseline was big.”

Colorado State was led by Liah Davis, who scored a game-high 21 points to go along with a game-high nine rebounds. Tatum Neubert and Lore Devos joined her in double-figure scoring with 12 and 11 points, respectively.

Tapia opened the scoring for the Cowgirls, and it sparked an 8-0 run to start the game. After a Ram jumper, Rusk and Gomez hit back-to-back threes to push the lead 16-2. A CSU layup made it 16-4 at the quarter break, and the Cowgirls had six assists on seven first-quarter field goals.

The Rams got on the board first in the second frame with a pair of layups before Cotton scored a pair of free throws to keep Wyoming’s 10-point lead, 18-8, at the 6:55 mark. Wyoming’s first field goal of the quarter came at the 3:59 mark, when Erjavec found a streaking Rusk for a layup. After a slow start to the quarter, the teams combined for 11 points in the final four minutes, and the Cowgirls took a 23-14 lead into the locker room at halftime.

Cotton stepped out and drained a three to start the second half, but the Rams answered with a three after a scramble for a near steal. Then, Gomez drained back-to-back shots from long range to extend the lead to 32-17 at the 8:06 mark. Tapia ended a near three-minute scoreless stretch with a three, and Erjavec converted from the elbow to make it 37-19 with 4:28 left in the quarter. But, the Rams ended the quarter on a 7-1 run, and Wyoming’s lead was cut to 42-32 heading into the final period.

The Rams scored the first basket of the fourth quarter, and Tapia converted a baseline jumper to answer. A Vitulova three forced the Rams to call time at the 4:25 mark with Wyoming leading, 52-38. Erjavec drove to the basket to score a layup and put the Cowgirls up 56-41 with 2:40 remaining in the contest. The Rams used a 6-0 run to cut the lead to single digits with a minute remaining, 56-47.

The Rams fouled Cotton, who made both her free throws. Cotton then grabbed a steal and found Gomez. Gomez was fouled and calmly sank both her shots. The Rams scored a layup on their last possession, and the Cowgirls dribbled out a 60-49 win.

The Cowgirls return to action on Wednesday, February 13, when they host Utah State at 6:30 p.m. (MT) in the Arena-Auditorium.