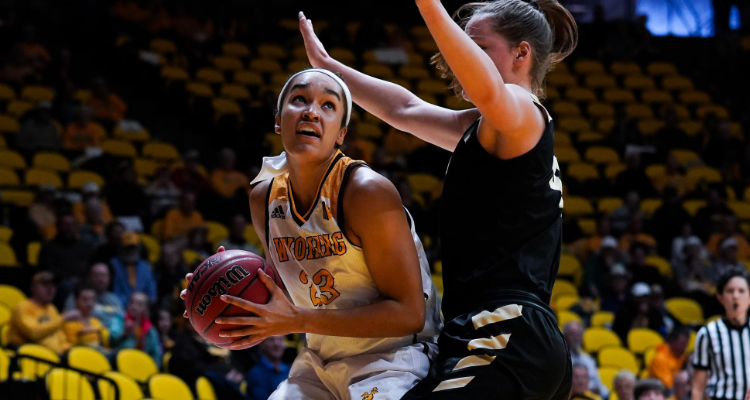 A LOOK AT THE COWGIRLS
The Cowgirls are 7-2 this season following a 77-70 win over a South Dakota State team that was earning votes in both national polls. The Cowgirls are led offensively by senior forward Marta Gomez who averages 16.2 points per game while shooting among the nation’s best from three-point range, 50.0 percent (27-of-54). Senior forward Bailee Cotton averages 11.7 points per contest and pulls down a team best 8.3 rebounds per game. Cotton has also taken a team-leading seven charges this season. Junior Taylor Rusk is scoring 9.9 points per contest while adding 31 assists and only nine turnovers. Senior guard Clara Tapia is in control of the Cowgirl offense, averaging a team-best 3.6 assists per game 3.2 assist-to-turnover ratio. Defensively, freshman guard Karla Erjavec has recorded 15 steals this season, while Cotton has six blocks and Gomez has five blocks.

Head coach Joe Legerski is in his 16th year at the helm of the Cowgirls, and he has compiled a 296-179 record as Wyoming’s head coach. He is the winningest coach in program history.

SCOUTING BOISE STATE
The Broncos own a 9-2 overall record, including a 5-1 mark at home and have won four consecutive games overall. Mountain West Preseason Player of the Year Riley Lupfer leads the way offensively with 11.9 points per game while adding 1.8 assists and 3.5 rebounds per contest. Brady Hodgins scores 10.6 points each game and averages 1.9 assists and 3.4 rebounds each time out. Defensively, Joyce Harrell collects 5.0 rebounds per game to lead the Broncos, while A’Shanti Coleman and Harrell each have eight blocks on the season. Coleman also has 21 steals to lead the Broncos, as five different players have double-digit steals this season. The Broncos were picked to finish first in the Mountain West in the annual preseason poll conducted by the league.

SERIES HISTORY AGAINST BOISE STATE
The Cowgirls and Broncos enter their eighth season as conference rivals, and the teams are an even 7-7 during their tenure in the Mountain West. Overall, Boise State holds an 11-10 lead in the series that dates back to 1989. Last season, Wyoming picked up its first ever win in Boise with a 66-51 victory over the Broncos. However, Boise State took the game in Laramie, 67-63.

UP NEXT
The Cowgirls will host their first Mountain West game of the season when the welcome UNLV to the Arena-Auditorium on Saturday, Jan. 5. Tipoff is scheduled for 2 p.m. (MT).