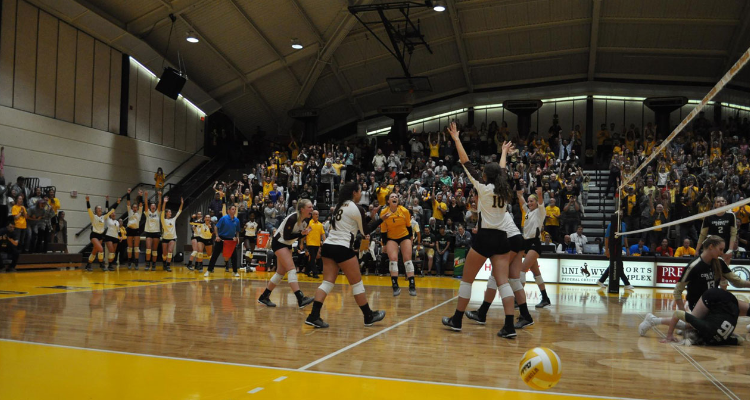 LARAMIE, WY. – The Wyoming volleyball team put on a show for the nearly 1,200 fans inside the UniWyo Sports Complex on Tuesday night, ousting its Border War rival Colorado State in four sets.

“It was a great match,” head coach Chad Callihan said. “It’s kind of crazy how we can bounce back at times. We have not been playing what I think is our level. We ran into some good opponents over the weekend, but we have not been playing like that. It was great to be at home; great crowd and a great environment. We played this match here a year ago and we talked about how overexcited we were…I just thought we were in a much different place tonight.”

“I think that when we’re clicking, and trusting each other and playing with confidence I think that we can do a lot of pretty great things, and I think we showed that tonight.”

The Cowgirls (11-6, 3-2 MW) used their depth on the offensive attack to their advantage with six Pokes scoring five or more kills, led by sophomore Jackie McBride with 10 on a .450 hitting percentage and Faith Waitsman with nine on a .333 hitting percentage. Setter Cori Aafedt recorded her 11th match of 20 assists or more with 20, followed by Marissa Hines with 16.

With their own hitting percentage of .284, Wyoming held the Rams to a .144 percentage—Colorado State’s lowest since its season-opening loss to Illinois (.137). Thanks in large part to the Pokes’ 13.5 team blocks, the Rams recorded 30 attacking errors along with 10 service errors. McBride added a career high nine blocks—including three solo—to lead the team.

With 983 digs heading into the match, libero Madi Fields made Wyoming history on Tuesday night with another 18 to become the ninth Cowgirl to reach 1,000 career digs. She sits one behind Erin Cantacessi (1,002; 1987-90) for eighth on the school’s career list.

The Cowgirls opened the match hot, hitting a .333 percentage in the first set to take the frame, 25-19. The Rams led for much of the first half of the set before Wyoming was able to rattle off a quick, 5-0 run to take a 14-12 lead at the midway point. The teams went back and forth briefly, but the Cowgirls—leading, 19-18, late—were able to run off six of the next seven points to clinch the first set of the match. McBride sniped six of her 10 kills for the match in the period on only six attacks to pace the Pokes and lead them to the early advantage.

After the Rams were able to claim a 25-18 win in the second, the teams headed to the third tied at one apiece. Wyoming caught fire in the third, holding the Rams to a .029 hitting percentage in the set and recording 5.5 team blocks. Only trailing for two points in the period, even different Pokes recorded a kill in the set, with three recording multiple as the Cowgirls took the 25-14 win to regain the lead.

“Overall, we really began to produce from the service line,” Callihan said. “Even when we weren’t getting aces or points out of it, we were breaking them down and getting them out of system, or forcing them into a one-hitter where we could establish a block and defend a little better.”

Wyoming carried that momentum over to the fourth set, opening on a 5-0 run and never looking back to lock up the 25-18 match-clinching set win. Waitsman was huge for the Cowgirls in the frame, racking up four kills to lead the team, followed by Tara Traphagan and Emily Lewis with three each. On the defensive end, Fields was crucial for the Pokes as well, adding eight digs.

Wyoming will look to get the UniWyo Sports Complex rocking again on Thursday night as it hosts Air Force at 6:30 p.m. MT. Tickets are available at gowyo.com/tickets.