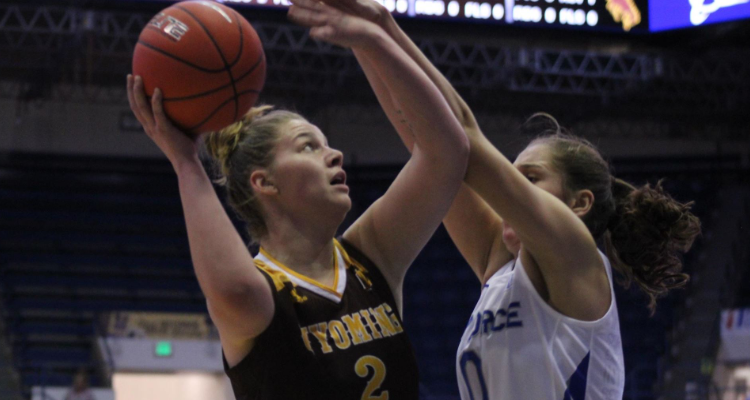 Sophomore Tereza Vitulova recorded the first double-double of her career with 16 points and a career-high 11 rebounds. Vitulova shot an efficient 7-12 from the field and added a steal for good measure. It’s the fifth time this season and the 10th time in her career she has reached double-figure scoring.

Sophomore Karla Erjavec had a season-high 15 points for Wyoming on 6-10 shooting. Erjavec grabbed six rebounds and dished out two steals on the night. Erjavec reached double-figure scoring for the second time this season and the 10th time in her career.

Wyoming scored 39 points in the first half on a blistering 63.0 percent from the field. The 39 points are a season high for a first half.

The Falcons were led by Riley Snyder’s 20 points and seven rebounds, while Kaelin Immel added 14 points and five assists for Air Force.

Air Force started the game with a jumper to take the early 2-0 lead, but a Weidemann three made it 5-4 with 8:05 to go in the opening frame. Sanchez Ramos and Erjavec scored back-to-back to make it 10-6 for Wyoming, and later, Weidemann and Sanchez Ramos each drained threes to give Wyoming an 18-11 lead with 3:48 remaining in the opening quarter. The Cowgirls scored six of the final eight points of the frame to take a 24-18 lead after one quarter of play.

Erjavec pulled up at the elbow for a jumper to open the second quarter, and a long two from Air Force made it 26-20 for the Cowgirls with 8:30 to play in the first half. An Erjavec three gave the Cowgirls a nine-point lead, and a Rusk driving layup made it an 11 point lead at 33-22 with 5:41 to play in the second quarter. Air Force used a 5-0 mini run to cut the lead to six, and after the teams traded baskets, a Kepenc layup made it 39-31 with 2:06 to go in the half, and that score held up until the break.

Vitulova opened the second half with a free throw, but the Falcons scored in the paint on their next possession. The Cowgirls used a 7-0 run, capped by an Erjavec old-fashioned three-point play, to take a 47-33 lead with 5:27 to go in the quarter. Air Force scored seven of the next nine to make it 49-40, and the Cowgirls called timeout with 3:21 to play in the quarter. Vitulova collected an offensive rebound and converted a three-point play with a layup and a free throw to make it 52-40 with 2:09 to go in the quarter. Erjavec added a layup, and the Cowgirls took a 54-40 lead into the fourth quarter.

The Falcons scored a pair of layups to start the final frame, before sophomore Tommi Olson converted a driving layup. Air Force cut the lead to single digits with a three to make it 56-47 with 7:25 to play, but a pair of Sanchez Ramos free throws pushed the UW lead back to 11, 58-47. A Rusk layup made it 60-50 with 5:48 to go. The Falcons pulled within six with a baseline jumper to make it 61-55 with 3:44 to play. Vitulova added a jumper for UW, but an Air Force three made it 63-58 with 1:35 to go. The Falcons went on a quick 5-0 run to make it 65-63 with 31 seconds to go. After a pair of missed Cowgirl free throws, the Falcons couldn’t hit their final shot and the Cowgirls walked away with the 65-63 win.

The Cowgirls return to the court on Saturday, Dec. 7, when they travel to face New Mexico for a 2 p.m. (MT) tip-off.