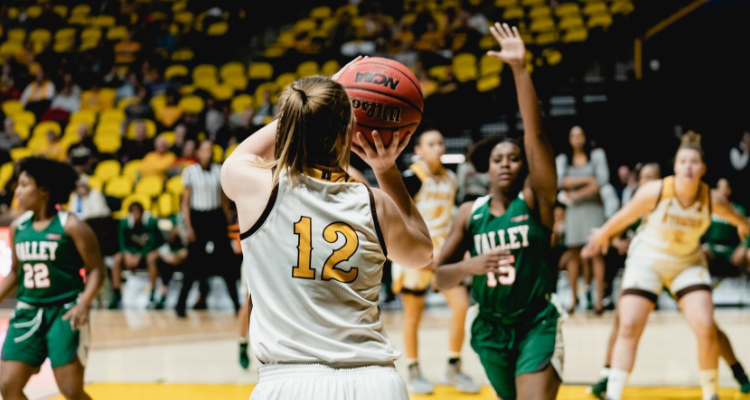 LARAMIE, Wyo. – The Cowgirls had their best offensive performance of the season, and used a stellar defensive effort to earn a decisive 95-22 win over Mississippi Valley State (1-7) on Thursday night. Wyoming (6-3) saw career nights from the pair of freshmen McKinley Bradshaw and Jaeden Vaifanua, as UW’s winning streak improved to four games.

“What I really saw that I was most pleased with was, I thought everybody that played, went in and played hard,” said head coach Gerald Mattinson. “They played to the scout, they did what they were asked to do. They didn’t play the score, and they defended until the end. That’s something we’re going to hang our hat on as long as I’m here.”

Bradshaw outscored Mississippi Valley State by herself, 26-22, and those 26 points are a career high for the Lyman native. Bradshaw hit a career-high 10 field goals, a career-high five three pointers and pulled down a career-high seven rebounds. She added an assist and a steal for good measure.

“I thought McKinley played outstanding,” Mattinson said. “She shot 10-of-13, 5-of-7 (from three), seven rebounds and she didn’t force a shot. She made good, solid decisions, and that basket must have looked like the ocean for her.”

Vaifanua had her first career double-double with 18 points and 11 rebounds, both of which are career highs. She also tied her career highs on the defensive end of the floor with a block and a steal. She drained a career-best two shots from long range and made a career-best eight field goals total.

Weidemann started the game’s scoring with a steal and a fast break layup to kickstart a 9-0 Cowgirl run that was capped by a Weidemann corner three, forcing an MVSU timeout with UW up 9-0 at the 7:14 to go in the first quarter. Out of the break, Weidemann added another three before the Devilettes got on the board with a long jumper.

Wyoming used a 7-0 run to go up 19-2 before MVSU scored a pair of free throws to end a 2:04 scoring drought. The Devilettes ended another 7-0 UW run with a layup, but Vitulova answered on the offensive end, and Bradshaw added a three to give UW a 31-6 lead after one quarter.

Kepenc scored a turnaround jumper to start the second quarter, and Erjavec added a three to make it 36-6 with 7:46 to play in the first half. Rusk added another trey with 5:07 to play, and Vaifanua made a fadeaway jumper in the paint and a three on back-to-back possessions, making it 44-6 with 3:41 to go in the half.

The Devilettes scored their first points of the quarter with an and-one play at the 3:03 mark. Weidemann, Olson and Vaifanua added layups on three straight possessions, and Wyoming took a 52-9 lead into the locker room at the half.

The Devilettes started the third quarter with three points before Vitulova scored a layup. The Cowgirls used an 8-0 run capped fueled by Sanchez Ramos and Johnson to take a 62-14 lead with 3:53 to play in the quarter, forcing a MVSU timeout. Out of the break, the Devilettes scored a jumper, but Rusk earned a steal and found Bradshaw for a fast break layup.

The Cowgirls went on another 6-0 run that was ended by a pair of Devilette free throws with 48 seconds to play in the quarter. Kepenc scored a layup on UW’s final possession, and the Cowgirls took a 70-20 lead into the fourth quarter.

Bradshaw grabbed an offensive rebound and scored a layup to start the final frame. Vaifanua scored on the block to make it 74-20. After a Devilette bucket, Bradshaw scored five straight points to put UW up 79-22 with 5:06 to play in the game. Bradshaw converted a rare four-point play to give UW an 83-22 lead. Pilli added a layup in her season debut before Vaifanua and Bradshaw combined for the final 10 points of the game, giving UW the 95-22 victory.

The Cowgirls are back in action on Sunday, Dec. 15, when they host Northern Colorado at 1 p.m. in the Arena-Auditorium.