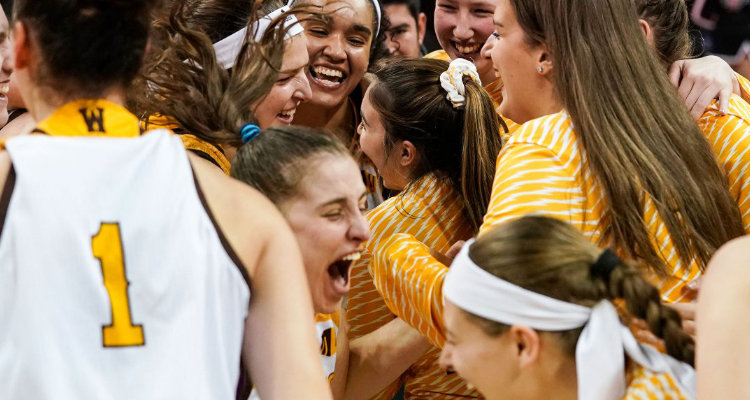 LAS VEGAS, NV. – Senior Marta Gomez would not go down quietly leading the Cowgirls to a 75-70 overtime win over San Diego State in the semifinals of the Air Force Reserve Mountain West Championship on Tuesday securing the Cowgirls first ever appearance in the championship game set for Wednesday. Gomez had 13 points in overtime and finished the evening with 25 points.

“Once I heard the buzzer beating, I was like, ‘we’re getting this,'” Gomez said. “I don’t know what it’s going to take, and I don’t really care, but we’re going to get this because our team deserves to play in the championship game tomorrow.”

“As far as the game tonight, neither team was going to give an inch,” said head coach Joe Legerski. “You take a look at it, the lead changed hands 15 times. The score was tied 15 times. And you play that again, add two more minutes, and who knows what the outcome is?”

Gomez finished the game with her 26th double-figure scoring game of the season with 25 points including 13 in overtime. With three three-point field goals, Gomez moved in to tenth place on the single-season list with 69.

“I took a look at our group tonight,” Legerski said. “There was a lot of pressure on them. I thought Marta felt the pressure early. I was talking to her and trying to lighten them up. But then I thought in overtime, this senior wasn’t going to be denied, and she just kept making big shot after big shot.”

The Aztecs struck first with a layup, but Cotton answered with a long jumper from straightaway. After trading blows again, Erjavec drained a three to give Wyoming its first lead, 7-4, and 1:17 later, the Aztecs called time trailing, 9-6, at the 4:26 mark of the first quarter. Rusk and Erjavec hit back-to-back treys out of the timeout, pushing the lead to 15-6 with 2:47 to go in the opening frame. However, the Aztecs made a late push, and Wyoming’s lead was cut to 17-12 at the end of the first quarter.

The Aztecs started the second frame on a 7-0 run that was finally stopped by Erjavec, who made a jumper to tie the game at 19-all at the 6:09 mark. The teams traded points until the media timeout at the 3:55 point had the teams tied at 23-23. Cotton made four free throws on two consecutive trips to put the Cowgirls up 27-24 with 2:39 to play in the half. But a 6-0 run by the Aztecs forced a Cowgirl timeout, trailing 30-27 with 1:22 left in the first half of play. Gomez ended the run with a pair of free throws, and after a Rusk steal, Gomez scored a trey from the top of the key to make it 32-32 at the end of the half.

Gomez started the second half with a three from the near wing, and the Aztecs answered with a layup. A Quinn Weidemann three put the Cowgirls up 40-35 at the 7:15 mark, but San Diego State tied it at 42 with 5:06 to play in the third frame. As Weidemann drained a three, Cotton was fouled, and she made both her free throws to complete a five-point possession and put the Cowgirls up 49-46 with 1:31 to go in the third quarter. The Aztecs added a pair of free throws, and Wyoming went into the fourth quarter with a one-point lead, 49-48.

The Aztecs hit a three to start the fourth quarter and re-take the lead. Gomez and Tapia scored back-to-back buckets to put the Cowgirls up 54-51. Rusk ended a nearly four-minute Cowgirl scoring drought with a floater in the lane, but the Aztecs ended their six-minute drought with a three on their next possession, making it 56-54 for the Cowgirls with 2:14 to play, and with 1:20 to go, the Aztecs tied the game at 56.

With 23.3 second to play and five seconds on the shot clock, the Aztecs called timeout with the game still tied at 56. The Aztecs executed and scored with 15 seconds to play to take the 58-56 lead. On the Cowgirls’ possession, Erjavec was fouled on her drive, and she made both free throws to tie the game with 5.7 seconds to play. The Aztecs couldn’t convert, and the game went to overtime.

A layup off an offensive rebound for the Aztecs started the overtime period, and Gomez answered with a baseline jumper. After another Aztec score, Gomez drilled a trey from the left wing to give UW a 63-62 lead with 2:26 to play.

The Cowgirls grabbed another rebound, and the Aztecs sent Gomez to the line, where she iced the game by putting the Cowgirls up 71-64.

The Aztecs were led in scoring by Sophia Ramos with 16 points. Zayn Dornstauder added 12 points and led all players with 10 rebounds.