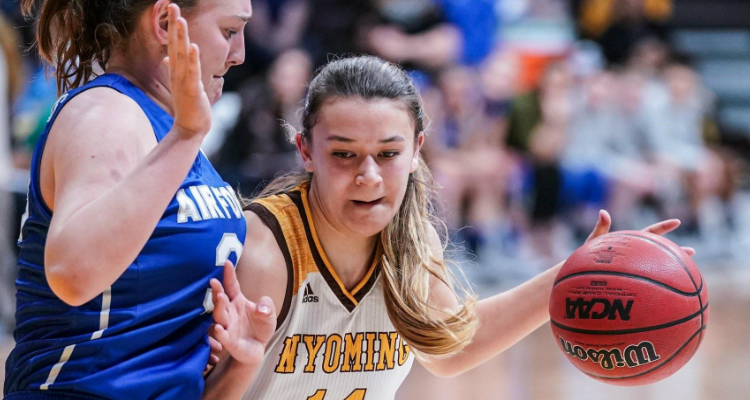 “We were able to get the ball inside more to Jaeden (Vaifanua),” said head coach Gerald Mattinson when asked what fueled a 17-3 run in the second quarter. “Jaeden posted up pretty well. We were able to change our motion just a little bit with a couple of cuts. Defensively, in the second quarter, we played really, really well, especially on their two scorers. I’m really pleased with what we did.”

Sophomore Quinn Weidemann led all scorers with a career-high-tying 24 points, including going 3-of-4 from deep and a perfect 7-of-7 from the free throw line. It is the first 20-point game of the year for Weidemann and the third of her career. It is also the 12th double-digit scoring effort from Weidemann this season. She also grabbed four rebounds and recorded an assist and a pair of steals.

Freshman Jaeden Vaifanua scored 12 points and a game-high 10 rebounds off the bench for the second double-double of the season for the Draper, Utah native. Vaifanua has now scored in double-figures nine times this season and five of the last six games. Vaifanua had nine defensive rebounds, setting a new career high. She also had two blocks, registering multiple rejections for the fourth time this season.

Sophomore Alba Sanchez Ramos also scored 12 points and grabbed four rebounds. She tied her career-high with five made free throws. She also added a pair of assists and two blocked shots, tying her career-high in blocks.

Sophomore Tereza Vitulova nearly reached double-digit scoring with nine points on 3-of-5 shooting, including draining her only three-point attempt of the night. Vitulova is now shooting 58.3 percent (14-24) from three-point range in conference play. She also had six rebounds and a steal.

Senior Taylor Rusk had a strong all-around game with eight points, five rebounds and four assists. It is the 13th game this season and the sixth game in the last seven that the Highlands Ranch, Colo., native has had at least five rebounds. She now has 120 rebounds this season, setting a new single-season career high.

Weidemann opened the game’s scoring with a running jumper in the paint before the teams traded threes. Then, the teams went back-and-forth to an 11-10 Wyoming lead at the 3:51 mark of the first quarter. Vaifanua ended a 2:46 Cowgirl scoring drought with a layup, but AFA answered with a layup to keep it a one-point game. After one quarter, the Cowgirls held a 15-14 lead.

Sanchez Ramos drove for a layup to start the second frame, but the Falcons kept it close at 20-19 with 7:13 to play in the half. Vaifanua, Sanchez Ramos and freshman McKinley Bradshaw combined for eight points to put UW up 28-19. After a Falcon free throw, Weidemann converted an old-fashioned three-point play, and the Cowgirls held a 31-20 lead. After a Falcon score, Vaifanua scored four and Weidemann added a pair of free throws to put UW up 37-22 at the halftime break.

The Falcons scored a three to start the second half, and Rusk answered with a driving layup on the other end. After a three-point play by the Falcons, UW scored four straight to make the lead 43-28 with 4:00 to play in the quarter. However, the Falcons scored eight of the next 10 points to cut the lead to single-digits, 45-36. The Falcons scored three and Vitulova added a layup to keep the Cowgirls up 49-39 after three quarters of action.

Air Force ended the run with a layup, but Vitulova responded with a pair of free throws. The Falcons went on a 9-3 mini-run to cut the Cowgirl lead to 62-50. Sanchez Ramos scored a free throw, but AFA ran down and scored a layup to make it 63-52 with 2:08 to play. Weidemann drained a corner three, and after a defensive stop, Rusk added a pair of free throws to make the final score 68-52.

Briana Autrey led the Falcons with 13 points, four rebounds and a pair of steals. Cierra Winters had 10 points and four steals off the bench. The duo of Riley Snyder and Kaelin Immel came in to the game averaging a combined 29.5 points per game, but were held to just 16 points total.