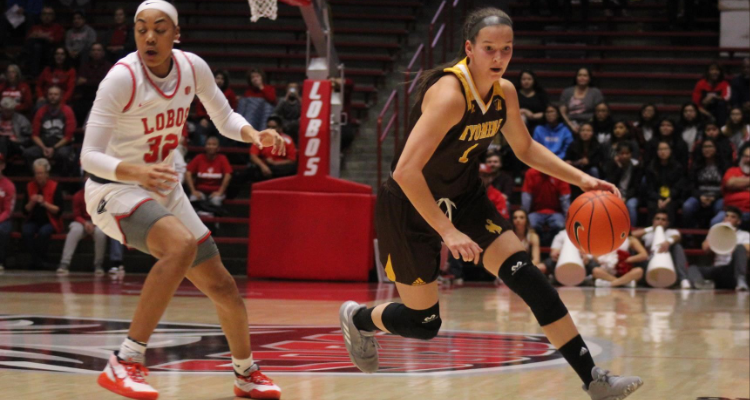 ALBUQUERQUE, N.M. – The Cowgirls walked into The Pit in Albuquerque against the second-highest scoring team in the Mountain West, the New Mexico Lobos, and held them to 13 points below their season average. Wyoming (5-3, 2-0 MW) stifled the Lobos (6-3, 0-2 MW) to the tune of a 73-66 road win.

“My staff put together a great game plan,” said head coach Gerald Mattinson, “We talked about it last night to the players extensively. We talked about what we have to do and becoming more disciplined. I’m not going to say for 40 minutes, but I’ll say for 36 minutes, we executed, and we played at the pace we wanted to play. When we can do that, as a staff and as players executing what we want, we have a chance to be pretty good.”

Sophomores Karla Erjavec and Tereza Vitulova led the way for Wyoming. Erjavec scored a season-high 17 points, had a career-high eight rebounds and dished out a team-best six assists. Erjavec reached double-figures for the third time this season and the 16th time in her career. Vitulova was a force down low, scoring 23 points on just 14 field goal attempts while collecting seven rebounds and tying her career-high with two steals. Vitulova reached 20 points for the second time this season and in her career.

Sophomore Quinn Weidemann was clutch down the stretch for Wyoming and ended the game with a season-high 15 points to go along with a career-high-tying four steals and two assists. Weidemann reached double-digit scoring for the third time this year and the 10th time in her career. Sophomore Alba Sanchez Ramos scored nine points and collected a career-high nine rebounds.

Vitulova opened the game’s scoring with a jumper, and the Lobos answered with a layup to make it 2-2. Back-to-back threes from Erjavec gave UW an 8-5 lead. With the Cowgirls up 14-9, New Mexico used a 9-0 run to take an 18-14 lead with 1:33 to play in the quarter. The Cowgirls battled back, and a Sanchez Ramos three made it 20-18 for New Mexico. The Lobos added a free throw before Erjavec scored a three to tie it at 21 after 10 minutes.

Vitulova struck first in the second quarter with a layup, but the teams traded points up to a 27-27 tie after Vitulova and Erjavec both scored for the Cowgirls. A Weidemann three ended a two-minute scoring drought for Wyoming, and gave the Cowgirls a 30-27 lead. The Cowgirls added two more threes, but the Lobos scored right with them, and UW led 36-34 with 1:15 to play in the half, and that score held up to the break.

Vitulova collected an offensive rebound and made a layup to start the second half, but the Lobos responded with a layup of their own. Weidemann scored five straight before New Mexico scored a three in transition to make it 43-39 for UW. Vitulova made a three to kick-start a 7-0 run for Wyoming. New Mexico stopped the run with a three, but Weidemann scored on the baseline to make it 52-42 for UW with 5:30 to play in the quarter. Bradshaw added a free throw after a New Mexico layup to keep UW’s double-digit point lead, 56-46 with 2:03 showing on the clock. However, a quick 4-0 run for NM led to a Cowgirl timeout with 1:05 to play in the third and UW holding a 56-50 lead. Out of the break, New Mexico added another layup, and Erjavec scored at the buzzer to make it 58-52 for Wyoming after three.

The Lobos drained a three to start the fourth quarter, and Vitulova answered with a layup to keep it a two-possession game, 60-55, and forcing a New Mexico timeout with 7:27 to play in the game. Vitulova scored a pair of free throws to push the Cowgirl lead to 62-55 with 5:55 to play, and Weidemann added a fast break layup after a steal. With 4:16 to go, the Cowgirls held a 66-59 lead, and Vitulova added a layup on their next possession. After a stop, the Cowgirls called timeout with 2:30 to play, leading 68-59. Out of the break, Vitulova added a layup, but the Lobos answered on their end and scored a three on their next possession to make it 70-64 with 1:10 to play.

Weidemann dribbled down the clock, drove the lane and scored a layup to make it 72-64 to force a Lobo timeout with 42.5 seconds to play. The Cowgirls got a stop and called timeout with 35.6 to go, but then turned the ball over, leading to a New Mexico layup. The Lobos fouled Weidemann, and she made one of two. After another stop, the Cowgirls got the ball back with 9.4 seconds left, but turned it over again, but the Lobos fumbled the ball out of bounds, and the Cowgirls dribbled out the 73-66 win.

Wyoming returns to action on Thursday, Dec. 12, when they host Mississippi Valley State for a game at 6:30 p.m. in the Arena-Auditorium.