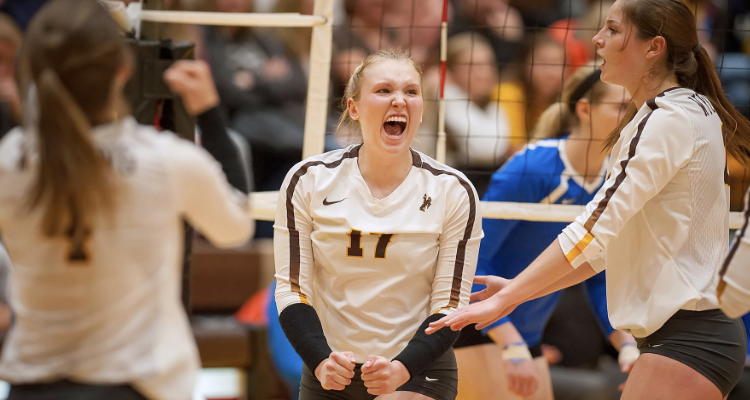 Portland, OR. – The Wyoming volleyball team split its first two matches of the North Portland Marriott Invitational on Friday, opening with a 3-0 sweep of LIU Brooklyn before dropping a 3-2, back-and-forth match to host Portland on Friday night.

In the first match of the day, the Pokes dispatched of LIU Brooklyn in a 3-0 sweep. Wyoming led a balanced offensive attack against the Blackbirds with seven Cowgirls tallying multiple kills, and five scoring more than five. The team finished with a .259 hitting percentage, while holding LIU Brooklyn to a .078 clip. Wyoming recorded a new season high for a three-set match in digs with 42, besting their previous three-set total of 33 against Oral Roberts.

The Brown and Gold offense was led by senior Reed Copeland, who notched nine kills with a .474 hitting percentage. Two Pokes were in double-figure assists with Cori Aafedt posting 22 and Marissa Harmon adding 10. Copeland was dominant on the defensive end as well, contributing six of the team’s nine total blocks to the Wyoming defensive front. Junior libero Madi Fields turned in what would be a short-lived new season high for digs with 20.

The Cowgirls took the first set, 25-22, from the Blackbirds in a late comeback to seize early control of the match. Trailing, 20-16, Wyoming used an 8-0 run to take a 24-20 lead and eventually close out the opening frame. Copeland scored five of her nine total kills in the first, followed by Tara Traphagan, KC McMahon and Marissa Harmon with two apiece. Wyoming blocked four attacks as a team in the set—led by Copeland, Traphagan and Jackie McBride with two each—and Fields was able to keep the ball alive for the Pokes with 10 digs.

Wyoming was able to create a bit more separation in the second set, coming up with the 25-17 set victory. The Cowgirls caught a rhythm on offense, hitting at a .394 percentage while also holding the Blackbirds to a .081 mark. Halie McArdle tallied four kills on a .571 hitting percentage, followed by McBride with three (.600).

McArdle and Traphagan combined for seven of the Cowgirls’ 13 kills in the third-and-final set, as Wyoming closed out the match with a 25-20 win in the frame.

In the nightcap, the Cowgirls couldn’t overcome a slow start and came up just short of a comeback in five sets to the Pilots. Offensively, the Cowgirls hit .293 for the match, compared to the Pilots’ .288 percentage. Of the 12 Wyoming players to see action in the match, 10 recorded at least one kill with McMahon adding 16 on a .400 hitting percentage and Traphagan following closely behind with 15. Aafedt added 29 assists—the most in a match by a Cowgirl this season—as Harmon added 22 with four kills.

After Portland came out hot with a 25-12 win in the first set, Wyoming found a steady footing in the second and was able to gain some of their rhythm back. The Brown and Gold led for much of the second set and had a couple of set points to take the frame, but the Pilots rallied late for the 27-25 win to go up, 2-0.

The two teams continued to battle through the third set, as the Pokes and Pilots traded blows with 21 ties and nine lead changes in the period. Again going to extra points to decide the set, it was the Cowgirls who came up clutch to fight off three match points and come out with the 30-28 win.

The fourth set was all Cowgirls as the Pokes jumped out to an 11-3 lead and never looked back, finishing off the 25-17 set victory to force a fifth. Six different Cowgirls recorded a kill in the dominant forth, led by Traphagan with five on 10 attacks while Aafedt dished out eight assists.

The fifth set played out a lot like the second and third, with the two teams going back and forth for much of the frame; however, as the Cowgirls held a 10-9 lead midway through, the Pilots ran off a 6-1 run to finish off the match. Both teams showcased their offensive chops in the fifth, hitting well over .500 for the set. McMahon was impressive in the decisive set, scoring four of the Cowgirls’ 10 kills.

The Wyoming volleyball team got back on track Saturday morning with a 3-0 sweep of Montana State to wrap up play at the North Portland Invitational.

The Cowgirls (5-1) combined for 40 kills as a team while hitting a .215 percentage. Defensively, Wyoming totaled six blocks for the match with no errors, and outdug the Bobcats, 62-59.

Sophomore Jackie McBride turned in a nice all-around game, recording a team-leading 11 kills on a .526 hitting percentage while also leading the team in blocks with four to go along with four digs on the defensive end. Tara Traphagan and Halie McArdle both recorded eight kills each, as McArdle also led the team in digs with 14. Marissa Harmon and Cori Aafedt both reached double figures in assists with 17 and 12, respectively.

Wyoming opened hot, jumping out to a 5-0 lead to start the first set. The Cowgirls withstood a late run from the Bobcats, who cut the UW advantage to 24-22, before the Pokes were able to shut the door and take the first, 25-22. McBride led Wyoming with an impressive six kills on seven attacks with no errors in the set.

The second frame was all Cowgirls as UW jumped out early and never looked back, extending its lead to as large as 11 before finishing off a 25-14 set. Wyoming hit an efficient, .323 percentage offensively, while recording four of their six blocks for the match to help hold the Bobcats to a .028 clip.

Montana State wouldn’t go away quietly in the third, as the teams went back and forth to combine for 18 ties and eight lead changes in the period. Tied at 22, the Cowgirls relied on late kills from Harmon and the finisher from McArdle to clinch the set, 25-23, and put the Bobcats away.

The Cowgirls will return home next weekend to host the UniWyo Invite, beginning on Friday at noon with Binghamton.