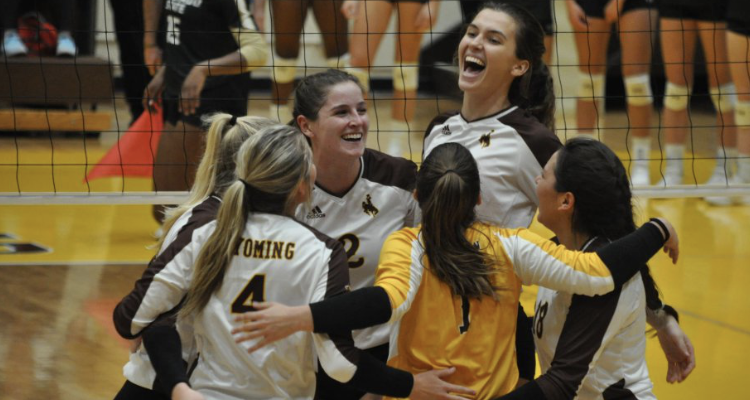 LARAMIE, WY.   – The Wyoming volleyball team wraps up its four-match homestand this weekend as it hosts Utah State and Boise State at the UniWyo Sports Complex. Wyoming will look to extend its best home start in program history, as the Brown and Gold is off to a 9-0 start to its home slate for the first time ever.

“It’s going to be a couple of interesting matches,” head coach Chad Callihan said. “Utah State’s got a really nice libero. We’ve been hitting quite a few balls in her zone, so we’re going to have to do a better job of moving the ball around and keeping it away from her a little bit. They’ve got some really good attackers that can frustrate you if you aren’t prepared. Boise is as talented as anyone in the league. They’ve got pins that can score, and their record is a little deceiving. They started the conference season without their freshman middle who is probably going to be the Freshman of the Year. They got her back on Saturday, so she’ll be back to see us. It should be a good match, a good battle.”

The Cowgirls (12-6, 4-2 MW) open the weekend on Thursday with a 6:30 p.m. match against the Aggies before hosting the Broncos on Saturday at 1 p.m. Thursday’s match will be Greek Night, and will include a Yeti cooler giveaway for one lucky student. Saturday’s match is Youth Volleyball Day, and will feature $3 tickets for all youth volleyball players in uniform.

“Those three-straight weeks on the road had a big impact on us, and probably as much in the classroom as anything,” Callihan said. “We’ve got some pretty high achieving kids and it stresses them when they miss too much class…It’s been good to get back (the last couple of weeks). We were able to get a good practice in on Saturday and know that we were able to go hard and work on some things with a day off Sunday. There are a lot of positives with that and hopefully it shows in our play this week.”

It was a fun week to be inside the UniWyo Sports Complex last week, as the Wyoming volleyball team defeated rival Colorado State, 3-1, on Tuesday before mounting a 3-2 comeback win over Air Force on Thursday. Jackie McBride led the team with 23 kills on the weekend to earn MW Offensive Player of the Week honors for her efforts, while Cori Aafedt and Reed Copeland both posted double-doubles in the win over the Falcons.

Utah State enters this Thursday’s match at 3-14 overall and 1-5 in conference play following three-straight losses to Nevada, Fresno State and San Diego State. Sophomore outside hitter Bailey Downing leads the Aggies in kills on the season with 189 on a 2.74 kills per set average, while setter Kassidy Johnson ranks third in the conference with 609 assists so far this year. Freshman middle blocker ranks fourth in the MW and 21st in the country with 88 blocks. Libero Tasia Taylor has racked up 298 digs, which rank second in the MW.

Thursday’s match against the Aggies will be the 35th in the series between the two teams, which dates back to 1977. Wyoming has won 19 of the previous 34 contests against Utah State.

Boise State heads into the weekend at 11-6 and an even 3-3 in MW play. The Broncos split a pair of matches last weekend in Boise, defeating Fresno State, 3-1, and dropping a 3-2 match to San Diego State. Senior outside hitter Sabryn Roberts leads the Broncos in kills with 253 so far this season on a 4.03 kils per set average that ranks second in the MW and 45th nationally. Setter Danielle Boss has compiled 426 assists to lead the team. Middle blocker Morgan Hughes leads the team in both blocks (71) and service aces (30), while libero Jessie Brigham paces the Broncos in digs with 205.

The Cowgirls and Broncos will be meeting for the 25th time this Saturday in the series that dates back to 1979. Wyoming is 13-11 against Boise State in the previous 24 contests.