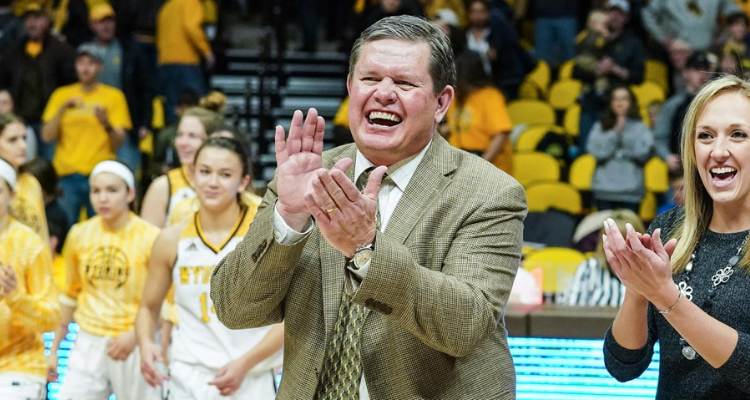 LARAMIE, WY. – The Cowgirls used a strong defensive effort and balanced scoring to end Boise State’s 10-game winning streak and give head coach Joe Legerski his 300th career victory – all of which have come at Wyoming.

“That’s beside the point for me, that’s nice,” Legerski said. “That means I’ve had a lot of good players play for me. I’ve been fortunate to be at the same school for a great deal of time with tremendous support from Tom Burman and the administration. But, that’s something for the players. I’ve had some really talented ones that buy in to what we’re asking them to do.

“When I take a look at this game, it’s very much what we ask players to do,” Legerski said. “We’re better off when we have a number of people trying to score. Boise State creates such issues for you. They’ll switch you one through four, they’ll play you zone for a while, then switch it to man. It requires you to be really good in that motion offense to understand what’s going on.

The Cowgirls were led offensively by senior Marta Gomez’ 15 points. She also added four rebounds and a pair of steals while shooting a perfect 6-of-6 from the free throw line. Senior Bailee Cotton again flirted with a double-double, registering 14 points – in large part to a career-high 10 made free throws – and seven rebounds while collecting a block and a pair of steals.

Freshman Karla Erjavec kept her double-digit scoring streak alive, scoring 10 points to reach at least that mark in seven-consecutive games. It’s the longest streak for a freshman since Kayla Woodward scored at least 10 points in nine consecutive games. Erjavec added a pair of steals on the defensive end, as well, upping her team-leading total to 22 on the season. Senior guard Clara Tapia added a season-high nine points to go along with four boards and a pair of assists.

The Broncos were held to a season-lows with 52 points only two made three-point field goals. Not a single Boise State player reached double-digit scoring, and Wyoming never trailed in the contest.

“I thought the defensive effort was there for 40 minutes,” Legerski said. “When you’re up 15 at the half, it’s probably about as uncomfortable a feeling as there is for a coach. Just knowing what Boise State has offensive-wise, and what they can do in a hurry with their three-point shooters. We talked about staying out on them, making everything difficult, and trying to do the best we can with some deflections, and I thought we were able to do that.”

Boise State was led by Riley Lupfer, Sofia Galeron and Jayde Christopher, who all scored seven points. Lupfer and Marta Hermida both added six rebounds, while Hermida led the team with three assists.

The Broncos shot 36.7 percent (22-of-60) from the field, 13.3 percent (2-of-15) from three and 85.7 percent (6-of-7) from the free throw line. It’s the second straight game the Cowgirls have only allowed two three point field goal makes, and the 13.3 percent is a season low for a Cowgirl Mountain West opponent. Boise State had nine assists and 15 turnovers.

The Cowgirls outrebounded Boise State 36-34, the ninth game in a row UW has had more rebounds than its opponent, and it led to BSU only scoring two second-chance points on the day.

Junior Taylor Rusk opened the game’s scoring with a driving floater from the left side, but the Broncos immediately answered to keep it tied early. Later, Cotton hit a pair of free throws to put the Cowgirls up 8-4 at the 6:38 mark of the first quarter. The teams traded baskets until the Cowgirls took a 12-8 lead into the media timeout. Tapia converted an old-fashioned three-point play, and Wyoming went up 17-8. Cotton gave the Cowgirls a 10-point lead with a pair of free throws, making it 20-10 with 1:33 left in the frame. However, the Broncos scored at the buzzer, but Wyoming took a 22-14 lead into the quarter break.

Both teams struggled to score to start the second, and Boise State struck first with a layup at the 7:25 mark. But the Cowgirls answered with an 8-0 run, highlighted by a turnaround hook shot by freshman Tereza Vitulva and a fast break layup from classmate Quinn Weidemann, and the Cowgirls took a 30-16 lead to force a BSU timeout at the 3:56 mark. The Broncos ended a 4:12 scoring drought with a layup out of the timeout. The teams traded scores to end the half, but Tapia beat the buzzer with a pull-up jumper from the elbow, and the Cowgirls took a 36-21 lead into the halftime break. The 21 points are the fewest the Broncos have scored in any half this season.

Gomez opened the second half by swishing a three ball, and BSU scored a layup down low to respond. Boise State hit its first three of the night and sparked a 7-0 run to bring it within 43-32 at the 4:54 mark. The Cowgirls answered with four straight points, and after a Bronco three, Weidemann converted an and-one play to preserve Wyoming’s 15-point lead at the 3:16 mark. But the Cowgirls went cold, and another BSU 7-0 run made it 50-42 at the end of the third quarter.

Cotton drained a pair of free throws to start the fourth frame, but a Bronco layup kept it a single-digit lead for the Cowgirls, 52-44. Erjavec knocked down a triple, and following a BSU turnover, Cotton connected on a free throw to make it 58-46 at the 5:50 mark. An and-one play for the Broncos made it 58-49 heading into the final media timeout at the 4:39 mark. Gomez scored in the post to push the led back to double-digits, 60-49, and then Cotton took her second charge of the game on the next defensive possession.

The Broncos started fouling, and Gomez sank a pair of free throws to push the lead to 62-49 with 1:44 remaining in the game. The Broncos ended a 4:03 scoring drought with a three-point play with 58 second remaining to cut the Cowgirl lead to 62-52. Gomez sank her three throws, the Cowgirls earned a stop on defense to take the 64-52 win.

The Cowgirls return to the hardwood on Wednesday, Jan. 30, when they travel to face Fresno State. The game is set to tip off at 8:00 p.m. (MT).