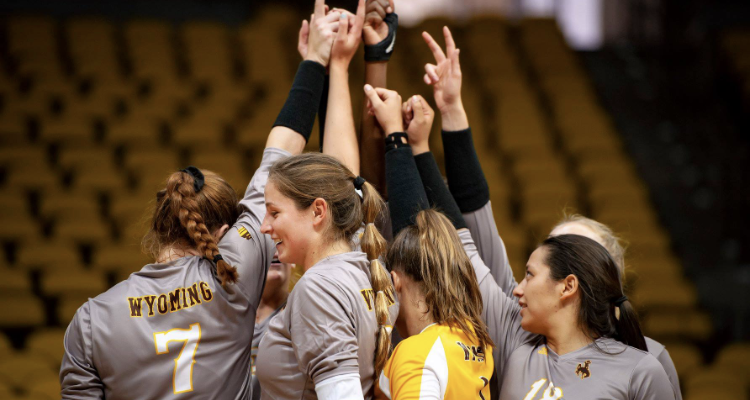 Laramie, WY.    –    The Wyoming volleyball team wrapped up a three-win opening weekend Saturday night as it knocked off No. 15 Colorado in an epic, five-set match to take the Rumble in the Rockies team title. The win marked the program’s first win over a ranked team since beating No. 14 Ohio State in 2015 and the seventh win over a top-15 team all-time. The team also opened the 2018 season with wins over Oral Roberts and North Florida.

At Saturday night’s, Rumble in the Rockies, the Cowgirls (3-0) outscored the Buffaloes in kills, 69-58, and hit a .279 percentage to Colorado’s .263. Senior Emily Lewis and freshman KC McMahon led the Cowgirls with 15 kills each, followed closely by Jackie McBride’s 14. Wyoming had two players over 20 assists in Cori Aafedt (26) and Marissa Harmon (24), with Aafedt narrowly missing a double-double stacking nine digs on the night. On the defensive end, senior Reed Copeland recorded six blocks, while libero Madi Fields added 13 digs.

“I just like this group,” head coach Chad Callihan said. “I think they’ve got something special to them and I think they’ve got a chance to do some really great things this season, and this was probably one of the really big steps for us.”

Wyoming got off to a hot start, locking up an early, 2-0 lead over the Buffs with wins in the opening two sets. In the first, the Pokes seized a 5-1 lead that eventually ballooned to 16-9 midway through the frame. Colorado would push to within one point five times, but Wyoming remained poised late to pull out the 25-23 set victory. Lewis and McArdle led the way for the Cowgirl attack, both recording four kills in the set with Aafedt assisting on seven kills. The Wyoming defense stepped up big in the period as well, blocking six Buff attacks, led by Copeland’s four.

The Cowgirls recorded a stifling .517 hitting percentage in the second set to overwhelm the Buffs and take the frame, 25-21. Five Wyoming players recorded multiple kills, led by another four from Lewis and three from McBride, Copeland and McMahon.

“I think (the first two sets) were a good momentum builder for our team,” Copeland said. “One thing we’ve been stressing is working on our blocking and going back to basics, and I think being able to do that really changed the momentum for our team.”

Colorado responded in the third and fourth sets, taking them, 25-21, and 25-16, respectively to force a decisive fifth set.

In the final frame, the Pokes jumped out to a 6-1 lead to take control early; however, the Buffs battled to get back to within two a couple of times before tying it up at 13-all. After Colorado’s Lillie Klemmer faulted on a service error, the Cowgirls found themselves with match point leading, 14-13. With newcomer Kiahlei Yaste on serve in her first collegiate appearance, it was McMahon that recorded the final kill off a Harmon assist to finish off the win.

Cowgirls handled North Florida, 3-0 on Friday, in the first match of the weekend. The Cowgirls stormed past the Ospreys in a 3-0 sweep. Senior Emily Lewis and Tara Traphagan co-led the Pokes in kills with eight apiece for .412 and .400 hitting percentages, respectively. Cowgirls Cori Aafedt and Marissa Harmon both tallied double-digit assists, with Aafedt leading the team with 18 and Harmon tallying 14. Senior Reed Copeland and junior Madi Fields held down the Wyoming defense, as Copeland recorded nine total blocks and Fields added 12 digs.

Wyoming Volleyball now turns its attention to next weekend when it will travel to face Portland, LIU Brooklyn and Montana State in tournament action in Portland, Ore. Action at the event begins on Friday, Aug. 31st and continues, Saturday, Sept. 1st.