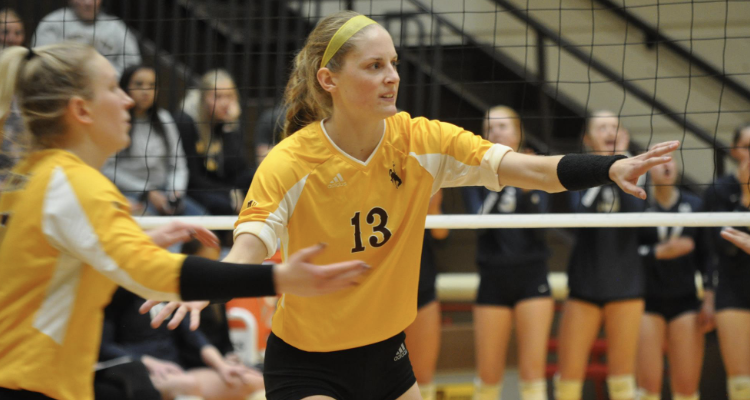 LARAMIE, WY.  – The Wyoming volleyball team treated the 1,100-plus people in attendance at the UniWyo Sports Complex Saturday night to a treat, defeating UNLV, 3-2, in an epic match to close out the regular season.

The win clinched a third-place finish in the MW standings for the Cowgirls. It also locked up a 20-win season for the team, the program’s fourth in the Chad Callihan era and the first since 2015. Wyoming will now await to hear whether it has been selected to the National Invitational Volleyball Championship.

Being the final match of the 2018 regular season, the match marked Senior Night for Cowgirls Reed Copeland, Cori Aafedt and Emily Lewis, who were honored for their outstanding careers both before and after the match.

“I definitely haven’t processed it yet,” Lewis said about her Senior Night. “It was just a great environment tonight, with so much support from our teammates and coaches. It’s really been a joy to play with the other seniors, and I’m so grateful. I don’t think I’ll process it for a while, but this is going to be a good memory, nonetheless.”

Lewis had an outstanding final home match, delivering 16 kills on a .316 hitting percentage along with three service aces. Junior Halie McArdle recorded her sixth career double-double and second of the season with 11 kills and 13 digs. Aafedt led the team in assists with 27 on the night.

“We knew that they were going to battle with us the whole time,” Aafedt said. “Getting those crazy, big plays that we can win, that’s huge for us. Then, the crowd gets really into it, we get really into it and draw from the crowd. It’s awesome and helps us win that next one afterwards.”

Libero Madi Fields had a career night defensively, adding a career-high 31 digs, bringing her season total to 463—which ranks fourth for digs in a single season in program history. Copeland and sophomore Jackie McBride both recorded five blocks to pace the Pokes to 10 as a team.

“We knew that (they were going to key in on our blocking), so we knew that even if the blocks weren’t necessarily there, the floor defense would be there,” Copeland said. “We knew that Madi (Fields) and Jaiden (Chase) and Halie (McArdle) were going to be there to dig all the balls that we couldn’t block, and from there on out it was just going to be about getting good touches from them.”

Copeland recorded six blocks in the first set while McArdle had five, both lifting Wyoming to a 25-21 first-set win. After UNLV jumped out to a 3-0 lead to open the match, the set went back and forth before a 5-0 Wyoming run to take a 22-16 lead. The Rebels would get it back to within three at 24-21m but a kill from
McArdle from Aafedt locked up the early advantage for the Brown and Gold.

After UNLV edged Wyoming for a 26-24 second-set win to tie up the team score, the Cowgirls—led by Lewis’s astounding seven kills on a .583 hitting percentage in the period—were again able to pull away late in the third to tally the 25-19 triumph in the third to go ahead, 2-1. After UNLV won a couple straight to go up, 9-6, Wyoming used another 5-0 run to take the lead for good in the frame. The Pokes stretched their lead to as large as six before closing out the set.

The Rebels struck back in the fourth with a 25-18 victory to force a decisive fifth set. For the most part, the fifth was all Cowgirls, as the Pokes used a 6-1 run after UNLV won the first point to take a 6-2 lead. Wyoming never looked back, eventually taking the set, 15-11. A number of Cowgirls came up big when it counted as Lewis posted three kills in the period to go along with nine digs from Fields and four blocks from McBride to help put the Rebels away.