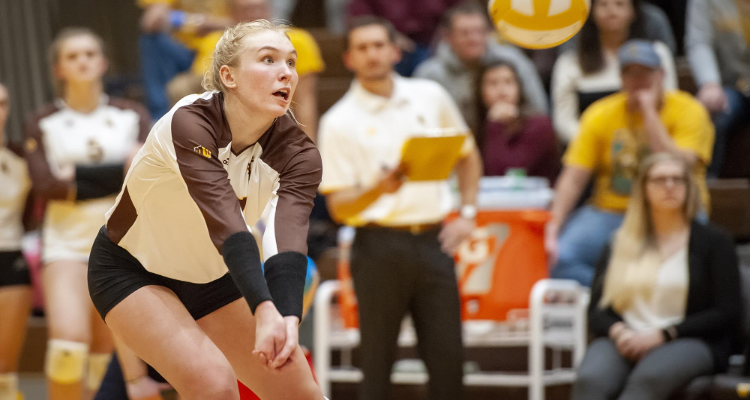 LARAMIE, WY.  – The Wyoming volleyball team dropped a heartbreaker in the first round of the National Invitational Volleyball Championship on Thursday night, falling in five sets to Utah Valley.

Two Cowgirls turned in double-doubles on the night, with setter Marissa Hines recording the first of her career with 23 kills and 16 digs, and junior outside hitter recording her third of the season and seventh of her career with 19 kills and 16 digs. It marked the second time this season that two Pokes have had a double-double in the same game—the first being Reed Copeland (12 kills, 13 blocks) and Cori Aafedt (31 assists, 12 digs) in the Wyoming five-set win over Air Force on Oct. 4.

Including McArdle, five Cowgirls finished the night with double figure kills. Emily Lewis finished the match with 14, while senior Reed Copeland and 11, and Jackie McBride and Tara Traphagan both had 10. Cori Aafedt fell just a couple assists short of her career high with 39 to lead the Pokes.

As a team, Wyoming recorded 15.5 blocks, led by Copeland and Traphagan who each contributed on eight rejections. Madi Fields turned in 24 digs on the night to pace the Pokes to 90 as a team.

The Cowgirls finish the season at 20-11, after making its second-straight postseason appearance—an accomplishment that hasn’t been done by a Wyoming volleyball team since 1989-90. It serves as the fourth 20-win season in the Callihan era and the first since 2015.

“It was a good year,” head coach Chad Callihan said. “Personally, I don’t think that we should have ended the season tonight, but ultimately that falls on me. We need to figure out how to get better and how to get more out of this group as we move forward.”

The loss marked the end of the Wyoming careers of seniors Copeland, Aafedt and Lewis. Copeland winds down her career with 658 total blocks, ranking second in school history, and her career-high 195 blocks this season were the third-most ever by a Cowgirl. In her final match, Emily Lewis cracked the 1,000-point mark for her career, to go along with 871 kills. Aafedt finishes her career at Wyoming with 1,315 total assists and 451 digs.

Led by five kills on five attacks from sophomore middle blocker Jackie McBride along with multiple kills by four other Pokes, the Cowgirls rolled the Wolverines, 25-11, in the first set. Wyoming posted a perfect, 1.000 sideout percentage in the frame, while hitting .560 and holding Utah Valley to eight kills with eight errors for a .000 hitting percentage. The Wolverines kept it close early, cutting the Wyoming lead to 7-5 at one point. The Cowgirls, however, would heat up after that, going on an 18-6 run to close out the set.

The second set was a different story, as the Wolverines withstood a 12-3 Cowgirl run to take a 24-21 lead late in the frame. Utah Valley would win four points in a row to regain a 25-24 lead before trading points again and eventually pulling out a 28-26 set victory to tie the match at one.

The Cowgirls were able to get back on track in the third, edging the Wolverines in a 25-23 set. The Cowgirls never trailed in the period, but Utah Valley was able to stay within arm’s reach, tying the score seven times. After the Wolverines tied it at 13 apiece midway through the frame, Wyoming rattled off a 4-0 run to create some breathing room. Wyoming’s lead was trimmed to as few as one at 24-23 after Utah Valley fought off three set points, but the Cowgirls were able to close it out thanks to a kill from Emily Lewis.

The Wolverines struck back in the fourth, coming back to take a 25-22 set win and tie the match score back up at two apiece and send the match to a fifth set.

The teams traded blows yet again in the fifth, combining for 13 ties and five lead changes. The Cowgirls had three match points in the set, while Utah Valley had two, but it was the Wolverines that ultimately came out on top in the neck-and-neck frame, 21-19, to seal the match.