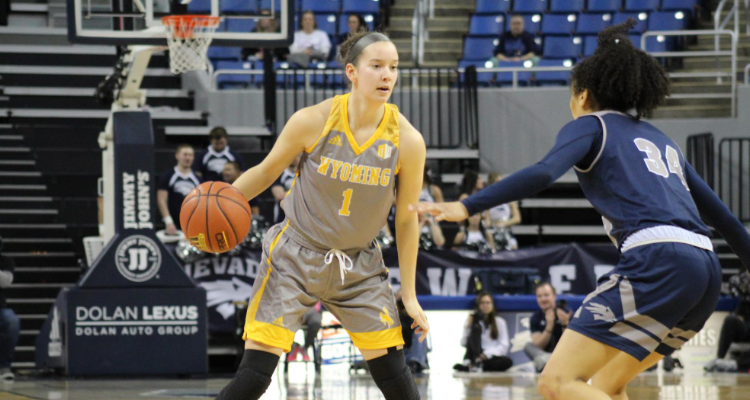 “To win on the road, as we always say, we’re looking for breakthroughs,” said head coach Joe Legerski. “It’s tough to play out here. I think Nevada’s a solid ball club. They just create issues for you, trying to defend against Redmond and Briggs, who are as good of an inside, outside combination as you play against. We really stepped up.”

The Cowgirls were led by senior Marta Gomez, who scored 13 points to reach double figures for the ninth-consecutive game. She also grabbed five rebounds, while senior Bailee Cotton led the team with 12 rebounds and chipped in six points.

Briggs opened the game’s scoring, and Rusk converted a jumper to answer. After an unsportsmanlike foul led to two free throws and a three for Gomez, Wyoming held an 11-6 lead. But a quick 5-0 run tied the game at the 1:19 mark. After a Cowgirl basket and a Wolf Pack free throw, the Cowgirls held a 13-12 lead at the first quarter break.

Nevada scored a layup to start the second quarter and take a one point lead, 14-13. Gomez ended a 5:39 minute scoreless drought with a steal and a fastbreak layup, and the Cowgirls trailed, 16-15 at the 4:37 mark. Gomez’s layup sparked an 8-0 run capped by an Erjavec jumper, and the Cowgirls held a 21-16 lead at the 2:25 mark. The teams traded baskets, and a Weidemann pull-up jumper at the buzzer gave the Cowgirls a 27-24 lead at the halftime break.

Nevada brought itself within one with a jumper to start the second half, and Gomez scored a layup to ignite a 6-0 run capped by a pair of Rusk free throws. After the teams went back-and-forth scoring field goals, the Cowgirls held a 35-30 with 4:02 left in the third quarter. However, the Wolf Pack scored the last basket of the quarter after the teams went score-for-score, and Wyoming led 39-36 at the end of three quarters.

Weidemann started the fourth frame with a triple off an Erjavec assist. Later, Erjavec was left unguarded at the top of the key and nailed a three to put the Cowgirls up 49-42 with 6:21 remaining. Weidemann drove the baseline to convert a layup, but the Wolf Pack answered, and the Cowgirls held the 51-46 lead with 4:34 to play. With under two minutes to play, the Cowgirls held the 55-49 after a Rusk layup.

The Cowgirls return to action on Wednesday, Feb. 20, when they travel to face UNLV in a game that tips off at 7 p.m. (MT).