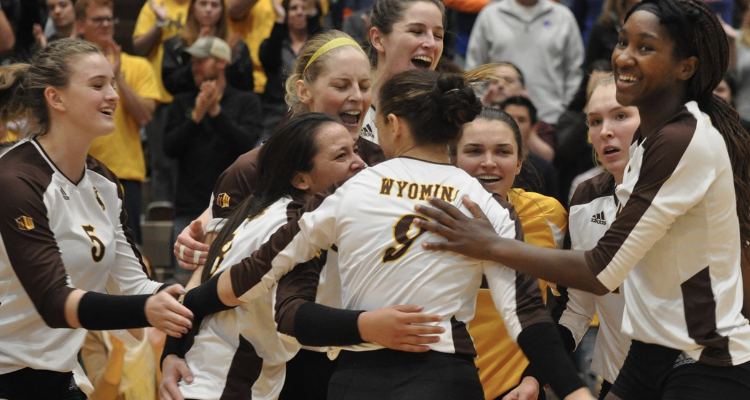 LARAMIE, WY.  – The Wyoming volleyball team won its third and fourth-straight matches this weekend inside the UniWyo Sports Complex to wrap up their homestand, knocking off MW foes Utah State and Boise State.

W vs. Utah State, 3-0
The Cowgirls posted their highest hitting percentage since MW play began last month with a .386 mark, while holding the Aggies to a .049 percentage. Nearly doubling up Utah State in kills, 49-25, Wyoming was led offensively by junior Tara Traphagan who recorded 13 kills on a stifling .684 hitting percentage. Senior Emily Lewis was also in double-digit kills with 10. Setters Marissa Hines and Cori Aafedt both reached 20 assists, as Hines led with a career-high 23 and Aafedt added 20. With her first assist of the night, Aafedt reached 1,000 assists for her career and ended the night with 1,019. Defensively, Wyoming combined to record nine blocks as a team with senior Reed Copeland posting six to lead the team, followed by Traphagan, Jackie McBride and Faith Waitsman who each recorded three. Junior libero Madi Fields led the team in digs with 13 of the squad’s 46.

W vs. Boise State, 3-1
Holding the Broncos to a .161 hitting percentage to their own .248 mark, the Cowgirls (14-6, 6-2 MW) moved to 13-1 this season when holding their opponent under .200. Three Pokes finished the day with double-digit kills in junior Tara Traphagan (14), junior Halie McArdle (11) and sophomore Faith Waitsman (10). Traphagan led all players (with multiple kills) in hitting percentage at .393. Setter Cori Aafedt led the team in assists with 26, while Marissa Hines also surpassed the 20-assist mark with 21. Defensively, the Cowgirls combined for 12 blocks, led by sophomore Jackie McBride with six and followed closely by senior Reed Copeland with five. Libero Madi Fields posted her seventh game of 20 or more digs this season with 23 of the team’s 61.

The Cowgirls will head back out on the road next weekend for contests at UNLV and New Mexico. Wyoming will open the weekend on Thursday at 7 p.m. MT against the Rebels before taking on New Mexico at noon MT on Saturday.