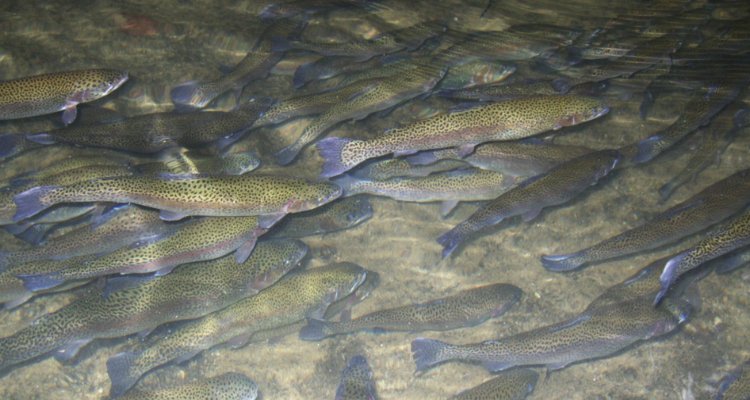 Pinedale, WY. | Sara DiRienzo, WGFD    –     Just over 100 years ago, an early version of a Chamber of Commerce known as the Pinedale Commercial Club, decided a fish hatchery was just what anglers needed to increase the fishing opportunities in western Wyoming. Running with that idea, the 14th Wyoming Legislature allocated initial funding and a local family ranch donated land to establish the Wyoming Game and Fish Department’s Daniel Fish Hatchery. Now, Daniel celebrates its 100th anniversary on Aug. 18, from 10 a.m. -2 p.m. at the hatchery with public tours and a barbecue to mark the occasion.

“Daniel is one of the oldest Game and Fish hatcheries, and it remains a significant part of Wyoming’s fish culture system,” said Bret Barngrover, Daniel Fish Hatchery superintendent. “Come see what an impact a century of fish raising has made on Wyoming.”

The hatchery is in the town of Daniel, nestled in a mountain valley between the Wind River Mountains and the Wyoming Range. The hatchery site was selected for its perfect 46-degree water temperature and clean, plentiful water source. The initial land was donated by the Pape family in 1917, and more land was deeded from the Boroff family in 1957 which expanded the hatchery to include the grounds it takes up today.

The first small crop of fish was raised in 1919, but issues with facility management and funding kept Daniel from fully turning out fish until 1926. The first large group was wild-spawned, hatchery-raised brook trout. Now, staff at the Daniel hatchery have the ability to incubate eggs and raise brook, brown, cutthroat, golden and lake trout, as well as splake, tiger trout and kokanee salmon. About 250,000 fish from Daniel are stocked around Wyoming and traded to other states in exchange for other fish species each year.

“We are excited to celebrate and show our gratitude to the community and landowners like the Pape and Boroff families who have all made a difference for fish,” said Barngrover.

The Aug. 18 anniversary celebration will take place at the Daniel Hatchery at 239 Pape County Road, in Daniel, WY. The event is supported by the Sublette County Historical Preservation Board.

Can’t make the on-site tour? Take a virtual walk-through of the hatchery on the Game and Fish Youtube page. In addition to the Daniel Fish Hatchery there are nine other hatcheries in Wyoming and they raise and release more than 5 million fish each year in Wyoming.